The Vexilar SP300 T-Box Sonar Phone includes the same core elements as the SP200 model that we’ve covered here. It consists of the same dual-beam sonar T-Box and the same transducer. However, the transducer comes with a suction cup mount, and the package also includes a portable case, a battery, a charger, and an armband for your smartphone.

The main elements of the Vexilar SP300 fish finder are the T-box sonar and a dual-beam transducer. The T-Box is

equipped with two connectors, one for the battery, the other one for the transducer. Its casing is made of durable thermoplastic material. It also has an On/Off switch and a LED light that indicates when the T-box unit is on and broadcasts WiFi.

The T-box unit can be installed on a boat, but the casing it comes with can always serve as a portable support for it. The battery is inside this box. It’s a 12V 4.5 amp hour battery that can last for up to 20 hours if fully charged.

This Vexilar fish finder pack comes with the same SPTB01 transducer as the SP200. However, it includes a suction cup mount which doesn’t require permanent installation and can be installed and removed with ease from any type of boat. The transducer can also be installed in-hull with a bit of improvisation, but this way, the signal may not be as powerful and since the temperature sensor in it won’t touch water, your phone won’t show the correct water temperature.

In terms of other accessories, the Vexilar SP300 fish finder comes with a cell phone armband featuring a waterproof casing. A charger for the battery is included as well.

Similar to the Deeper Pro+, the Vexilar SP300 fish finder connects to your phone or tablet via an app available for iOS and Android. The app is called SonarPhone and is available for free download from Google Play and from the Apple App Store.

The T-Box unit broadcasts a WiFi signal when it’s on. Its broadcasting range is approx. 300 ft. (91 m). Thus, if your phone is within this range, it should be able to stay connected to the T-Box and display the sonar data. It’s important to mention, though, that since the T-Box sonar unit basically creates a WiFi hotspot, once you connect your phone to it, you won’t be able to use the internet and other application that require internet access.

To begin with, the T-Box sonar unit offers dual-beam sonar that uses two frequencies, 200 kHz and 83 kHz. It 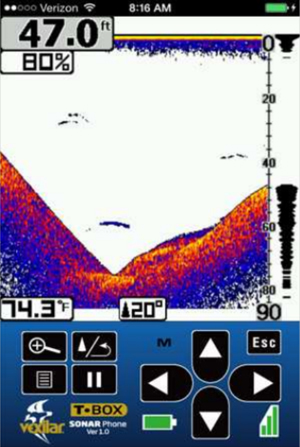 does not have CHIRP technology, so the transducer emits only one pulse. The transducer casts conical beams with a coverage of 40° @ 83 kHz, and 20° @ 200 kHz. Its maximum depth capability is 240 ft. (73 m) which can be achieved when using the 83 kHz beam.

The SonarPhone app offers a fairly decent range of standard sonar features and readings. The sonar window shows depth, gain level, depth scale, the selected beam angle, water temperature, as well as the strength of the WiFi signal and a battery indicator.

The sonar app view has a Real-Time sonar window (or A-Scope) which appears on the right of the standard sonar view. This is basically a vertical flasher which indicates the most recent sonar echo or differently put, what is in the sonar cone at the current moment. It does not have a Circular Flasher view, though.

A Fish Icon function is also available. This is similar to the Selective Fish ID+ available with most Humminbird fish finders. This sonar mode replaces the fish arch echoes with fish icons which makes them easier to distinguish. There are three sizes for the fish icons which give you an idea of the side of the detected fish. The Fish Icon function also shows the depth of each fish next to it; this feature can be disabled.

The SonarPhone app also offers two alarms: a Fish Alarm and a Depth Alarm. The Fish Alarm can be configured to sound for different sizes of fish. The Depth alarm can be set in a range of 1 – 99 ft. The manual recommends not to use it for shallow water navigation, though. Other notable features and readings are Split Zoom, Bottom Lock, Noise Rejection, Surface Clarity, Battery Indicator, Auto Depth Range, Sonar Speed, and more.

The Vexilar SP300 T-Box Sonar Phone fish finder includes a small sonar box, a dual-beam transducer with a suction cup mount, a portable casing with a 12V battery, a charger for the battery, and the smartphone armband. It uses your phone as the sonar unit and connects via the SonarPhone app. It offers a dual-beam sonar (83/200 kHz) with a depth range of 240 ft. It has a fairly decent range of standard sonar features including Fish Icons, A-Scope, Bottom Lock, Split-Zoom, Auto Gain, Depth and Fish Alarms, Surface Clarity, and more. In all, it’s an affordable fish finder, great for small boats or kayaks.