The Striker 7cv is one of the Garmin fish finders released in 2017, and also on the list of the Garmin discontinued units. It is a ClearVü fish finder without charts, only with a GPS plotter application. It also doesn’t support maps. For reference, this is the Garmin part number 010-01808-00. The newer alternative which also has Quickdraw Contours is the Striker Plus 7cv.

In terms of sonar, the Garmin Striker 7cv features two technologies: standard 2D CHIRP and ClearVü. The standard sonar is best to use when you’re looking for fish targets or if you want to use various standard sonar functions such as Fish ID, alarms, or the flasher mode. Conversely, ClearVü is best to be used for observing structure or the bottom contour, as it gives you the possibility to understand shapes better.

It’s capable of using three standard frequencies for 2D CHIRP, which are 50/77/200 kHz, while for ClearVü it can operate at 260/455/800 kHz. ClearVü uses CHIRP technology as well, which means that the sonar pulse is modulated over a specific range of frequencies, rather than using only frequency per pulse. Due to this aspect, the system provides clearer images with less clutter, offering a better separation between targets. So, for example, if the transducer beam hits a school of fish, it’s more likely to see each fish target separately rather than one big dot of color which may be interpreted as a structure, log, or boulder. 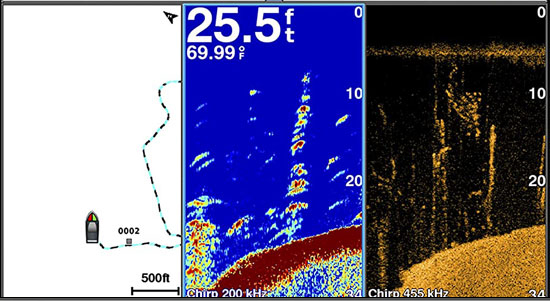 Fish Symbol ID assigns fish icons to targets that are interpreted as fish. Of course, not all targets that are caught by the transducer beam will actually be fish; some may be suspended debris or vegetation. However, each target will have its current depth close to it, which is a plus.

A-Scope (which stands for Amplitude Scope) is a vertical flasher that appears attached to the 2D CHIRP sonar view. It shows the information caught by the most recent sonar echo. Bottom Lock is a function that allows you to focus the unit’s view onto the bottom, maintaining a selected depth range. This way it’s easier to find bottom-feeding fish.

The Circular Flasher sonar is actually a circular depth scale, which also incorporates information regarding the targets caught by the sonar beams. The inner rings of the Flasher indicate depth, while the segments flashing on the outer rings indicate different strengths of the sonar returns. This type of sonar view is great for stationary fishing or ice fishing.

Auto Gain gives you the possibility to setup the unit to automatically filter unwanted noise, while Ultrascroll allows you to scan at higher boat speeds, enabling the sonar data to scroll faster. However, even with the Ultrascroll function ON, at higher speeds, over 40-50 MPH, images will lose quality.

As we’ve mentioned above, the included transducer integrates a temperature sensor. So, the unit can show the water temperature. It also has a Temperature Graph function which shows the variation of temperature over a scanned area. Therefore, it may be useful if you’re looking for surface water currents.

The Striker units do not have Sonar Recording and Sonar Rewind functions, and the Striker 7cv doesn’t make an exception. If you’re looking for a similar unit with these functions, the echoMAP CHIRP 73cv may be a good choice.

The Garmin Striker 7cv is equipped with a high-sensitivity internal GPS. It can show your coordinates or a certain waypoint’s coordinates. Also, via GPS it can also calculate the speed of your boat.

This unit does not have any charts and cannot be upgraded with any charts as it also doesn’t have an SD card reader. This is the main reason it costs considerably less than the similar echoMAP CHIRP 74cv. As support for navigation, it uses a blank sheet also known as a “waypoint map”. This gives you the possibility to mark waypoints in order to return to your hot fishing spots, boat ramps and docks. The unit can store up to 5,000 waypoints in its internal memory. You can select various icons for your waypoints in order to make them correspond better to the POI they’ve been assigned to.

Although the Striker 7cv is equipped with a 7-inch display, it has the same pixel matrix as the Striker 5cv model, 800H x 480V. But nonetheless, the images provided are quite focused. It’s a WVGA color display and also integrates adjustable LED backlight.

The unit is IPX7 waterproof which basically means that it can withstand incidental water exposure. But when fishing in saltwater it is recommended to wipe the unit with a dry piece of cloth as salt may eventually damage its connectors.

Speaking of connectors, this Striker unit doesn’t have NMEA, Ethernet connectivity or an SD card reader, these being some of the reasons it is cheaper than a similar echoMAP unit.

Last but not least, the box includes a classic tilt mount. The transducer has both trolling and transom mounts. The unit cover is not included.

The Garmin Striker 7cv is a fish finder and GPS combo unit. However, it doesn’t have any cartography, nor it can be upgraded with any cartography. It uses a blank waypoint map, allowing you to mark waypoints for your fishing spots. On the other hand, it offers two powerful sonar technologies, 2D CHIRP and ClearVü. It is a great unit for freshwater use, but due to its powerful CHIRP sonar, it can also serve as a great fish finder for coastal waters. Since it doesn’t have advanced cartography and connectivity features, it’s considerably cheaper than other 7-inch units. In all, it offers excellent value for the price.