The SOLIX 12 CHIRP MEGA SI+ GPS G2 is one of the new fish finder and chartplotter combos released by Humminbird in 2019. It offers a similar range of features as the last year’s SOLIX 12 MEGA SI GPS but comes with the new MSI+ transducer, has Dual Spectrum CHIRP sonar rather than DualBeam Plus, offers better coverage for MEGA Side Imaging, plus clearer and more detailed images. For reference, this is the Humminbird part number 411030-1 (the older unit was 410400-1).

In terms of sonar features, the SOLIX 12 MSI+ GPS G2 is similar to the SOLIX 10 MSI+ GPS G2 that we’ve already covered here. It offers Dual Spectrum CHIRP sonar, Side Imaging, and Down Imaging, with the new MEGA Imaging+ modes for the last two sonar technologies. It also supports 360 Imaging sonar, and the new MEGA 360 Imaging.

As we’ve mentioned above, the unit includes the new MEGA SI+ and MEGA DI+ transducer, the XM 14 HW MSI T. This transducer integrates a temperature sensor, it has 20 ft. (6 m) of cable and a 14-pin connector. Its supported frequencies, coverage, and depth capabilities are as follows: 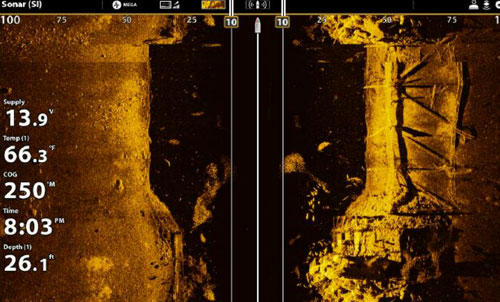 As its name suggests, the SOLIX 12 CHIRP MEGA SI+ GPS G2 is equipped with an internal GPS receiver. It provides fast and accurate positioning, with a real-time movement of the vessel on the unit’s display. It supports EGNOS, WAAS, and MSAS for position augmentation and also has GPS speed function.

In terms of charts, the SOLIX 12 CHIRP MSI+ GPS G2 comes pre-loaded with the Humminbird Basemap platform. These charts are based on NOAA and LakeMaster charts. They provide a wide array of points of interest, depth contours, spot-soundings, navigation aids, and more for the whole U.S. coastline. They also cover more than 10,000 U.S. lakes with 1 ft. contours and plenty of other data.

The unit is compatible with various superior charts such as Navionics+, Navionics Platinum+, LakeMaster, LakeMaster Plus, and SmartStrike. Evidently, it supports the SonarChart feature from Navionics, but it also has its own, built-in mapping application, this being the AutoChart Live.

AC Live uses the 2D sonar data and the GPS data to scan and draw the depth contours on the map. Therefore, you can create, save, and re-use your own custom maps, with the most up-to-date contours, add vegetation, bottom hardness, depth shading, and more.

Like all the other SOLIX units, the 411030-1 supports Radar. It also supports data from AIS units, AutoPilot, Minn Kota i-Pilot Link, Minn Kota Talon, and more.

This Humminbird SOLIX unit features a cross-touch interface. This means you can navigate through its menus and use its functions either by touchscreen commands, or via the keypad, stick, and knob on the right side of the display. Its interface is highly-intuitive, very easy to use. The unit’s display is 12.1-inch in diagonal and has a pixel matrix of 1280H x 800V. It also has LED backlight for superior readability in direct sunlight, and it is IPX7 waterproof.

The box includes the classic U-bracket tilt mount and a unit cover. An in-dash mounting kit is also optionally available.

The SOLIX 12 CHIRP MEGA SI+ GPS G2 offers wireless connectivity (Bluetooth) as well. This being said, you can sync it with your phone via the FishSmart App for software updates or notifications from your phone. Also, you can take control of your unit via an RC2 Bluetooth remote.

Other networking features include Ethernet, NMEA 2000, and NMEA 0183 ports. These allow you to easily integrate it into an already available boat grid, or plug-and-play with various other boating instruments such as external GPS sensors, AIS units, or Radar modules.

One last aspect to mention here regards the unit’s card support. As opposed to the SOLIX 10 G2 unit, this one has a dual SD card reader (not microSD). Therefore, you can use up to two cards simultaneously (one with charts, one for data backup or sonar recording, for example).

The Humminbird SOLIX 12 MSI+ GPS G2 is a chartplotter and fishfinder combo featuring MEGA Imaging+ sonar (SI & DI), and Dual Spectrum CHIRP sonar, GPS, Humminbird Basemaps, and AC Live. It includes the XM 14 HW MSI T transducer and also supports the new MEGA 360 Imaging from Humminbird. It offers a wide array of networking features such as Ethernet, NMEA 2000, and Bluetooth connectivity. It supports many external modules, including Radar, i-Pilot Link, external GPS, AIS and more. It’s an excellent unit for both inland and off-shore fishing, perfect for a wide array of boats.