The Cruise series includes the most basic Simrad fish finder and chartplotter combos. Even the Simrad Cruise 9 unit which is the largest of the series only has basic sonar without SideScan or DownScan, and also offers the minimum of navigation features for inland and offshore. For reference, this is the Simrad part number 000-14997-001, the one that includes the 83/200 transducer and the basic US charts.

To begin with, the Simrad Cruise 9 unit is equipped with basic CHIRP sonar; it does not have and does not support structure scanning sonar such as DownScan or SideScan. Just like the Simrad Cruise 7 that we’ve already reviewed here it only supports two base frequencies, these being 200 kHz and 83 kHz, or differently put, High CHIRP and Medium CHIRP. The CHIRP intervals are not specified.

The unit does not support the 50 kHz frequency, so it does not offer the possibility to use Low CHIRP. Therefore, if fishing in deeper waters, you will have to rely on the Medium CHIRP mode only. 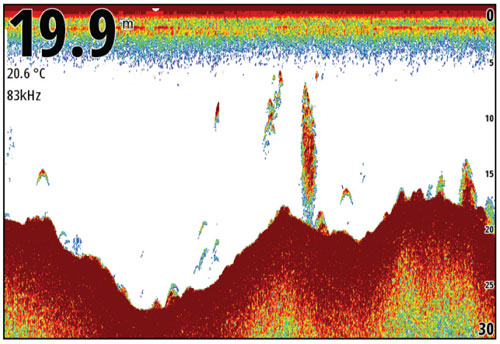 The included transducer with the Simrad Cruise 9 is the 000-0106-72 skimmer. It’s a small, plastic transducer featuring a transom mount, 20 ft. (6 m) of cable with an 8-pin connector. It also has an internal temperature probe, and the unit shows the temperature reading.

The unit makes available most standard sonar applications. The list includes Bottom Lock, A-Scope, Auto-Range, Noise Rejection, Split-Zoom, Sonar Recording, Fish ID, Fish Alarm, Depth Alarm, and more. However, it does not have a Circular Flasher mode. The unit can record the sonar feed in its memory or on a data microSD card.

As we’ve mentioned above, the Simrad Cruise 9 offers basic navigation features. It does not support VHF radio, AIS data, Radar or Auto-Pilot. It is equipped with an internal GPS receiver that supports WAAS, EGNOS, and MSAS for differential position correction. It also has a GPS speed function.

The unit has waypoint creation, route creation, and trail recording functions. Needless to say, it shows the coordinates for each waypoint, the distance between your location and the waypoint, and the bearing. You can record multiple trails which later-on can be converted into routes to which you can add waypoints. 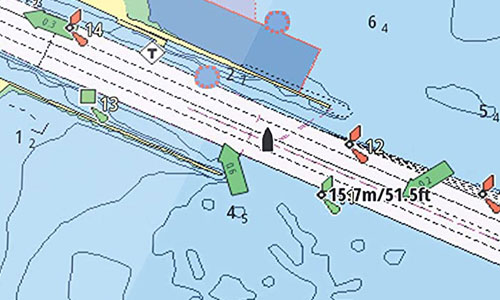 The unit is pre-loaded with the C-MAP US Coastal basemaps. These charts only offer basic detail, but the unit is compatible with charts from Navionics and C-MAP. The unit does not have its own depth contour recording feature, but if equipped with a Navionics+ charts card, it supports the SonarChart feature so you can create your own bathymetric maps.

The TripIntel page is available with the Simrad Cruise units as well. TripIntel offers a graphical representation of your trip on the charts as well as various other trip data such as distance covered, time spent on the water, maximum speed, average speed, and more. It also keeps a historical record of your trips, so you can compare data if necessary.

As its name suggests, the Simrad Cruise 9 features a 9-inch display. It’s a color display with a pixel matrix of 800H x 480V and white LED backlight, offering excellent readability in direct sunlight and from angles of 70° (top,bottom,left,right).

The unit is IPX6 and IPX7 waterproof. This essentially means that it should be able to withstand a powerful water jet, incidental water exposure, and even immersions in freshwater.

The Simrad Cruise 9 is keypad-operated. It does not have touchscreen technology like the Simrad GO XSE 9, for example. It offers buttons for Home quick access, Menu, Exit, MOB, Cursor (Arrow Keys), Zoom (Rotary Knob), Enter, Quick Waypoint Creation, and Power. Its interface is user-friendly offering several pre-defined split pages in vertical or horizontal format. Shortcuts for settings, storage, waypoints, and TripIntel are also available on the unit’s homepage. However, the Cruise units only offer the possibility to work with two applications in split-screen. They don’t have a 3-split or 4-split view.

The Simrad Cruise 9 unit doesn’t have networking features. It does not support NMEA, does not have an Ethernet port, and does not have built-in WiFi or Bluetooth. It only has a microSD card slot which can be loaded with Navionics or C-MAP premium charts, or data transfer.

Last but not least, the unit comes with the standard tilt mount and corner clips. A unit cover and an in-dash mounting kit are not included.

The Simrad Cruise 9 is a fish finder and chartplotter that offers basic CHIRP sonar (83/200 kHz), GPS, and basic US coastal charts. It comes with a transom skimmer transducer that supports both frequencies. The unit does not have NMEA, Ethernet, or other networking features. It’s very easy to use, has a very intuitive interface, and it’s keypad operated. Also, since it does not have structure scanning sonar and networking features it is considerably more affordable than a GO XSE 9 unit. In fact, it’s one of the most affordable 9-inch sonar/GPS combos with an included transducer at the moment.