Although the Lowrance Gen3 HDS units have been released quite a while ago, they haven’t been discontinued just yet. One of the most popular units from this series is the HDS-7. Like most units offered by Lowrance, this model is available in various bundles, with different map packs, with or without any transducer. In this post, we’re going to address the Lowrance HDS-7 Gen3 Insight USA part number 000-11788-001. This particular model includes the 83/200 kHz Skimmer transducer and the LSS-2 transducer (for StructureScan), and the preloaded Insight USA mapping pack.

The Lowrance HDS-7 Gen3 Touch Insight features a medium size screen, 7-inch in diagonal, with multi-touch and keypad, for the fastest access to all the functions. Its main interface works just as for your average tablets, most of the main functions of the unit are accessed from the main screen just as you access apps. It has a pixel matrix of 800 x 480, and 16:9 ratio, offering top-quality imaging. The unit also features LED backlight, for superior visibility in direct sunlight and in case of poor lighting conditions. Flush mount and bracket mounting systems are available and included with the box. 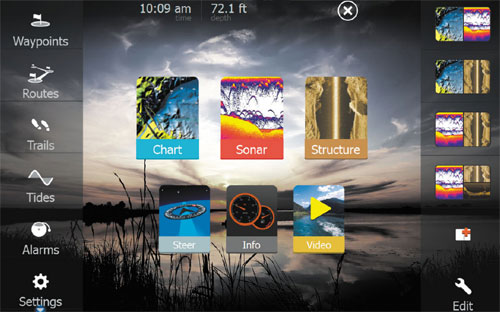 This model offers 2 micro-SD card slots, a great feature to have in case you want to use one card for maps and one for waypoints or sonar recording. With only one card slot, you would have to continuously swap cards, in order to use maps, save waypoints, and sonar. The unit also offers NMEA 0183 and NMEA 2000 ports, as well as Ethernet connection possibilities.

An important function provided by the Gen3 series from Lowrance is camera connectivity. This gives you the possibility to turn your unit into a surveillance device, or use an underwater camera to get a better view of what’s below the boat.

However, one of the best functions supplied by this unit is the GoFree wireless connection. GoFree gives you the possibility to use a wireless device such as your smartphone or tablet to control your Lowrance HDS-7 Gen3 display. It also allows you to upload sonar logs and work with the Insight Genesis platform, download software updates, use the GoFree shop, and connect to other third-party applications.

As we’ve mentioned above, the Lowrance 000-11788-001 HDS-7 Gen3 Insight comes with two transducers: the 83/200 kHz one and the 455/800 kHz one for StructureScan. Evidently, it supports StructureScan HD sonar technology, providing SideScan imaging and DownScan imaging with photo-like clarity. The 455 kHz frequency can be used for all depths the unit is capable, but the 800 kHz frequency is best for high clarity and detail in shallow waters. Both transducers have temperature probes built-in, enabling the unit to indicate water temperature. Not only that, but the unit also has the Temperature Graph function, which supplies a complete picture of water temperature variations. 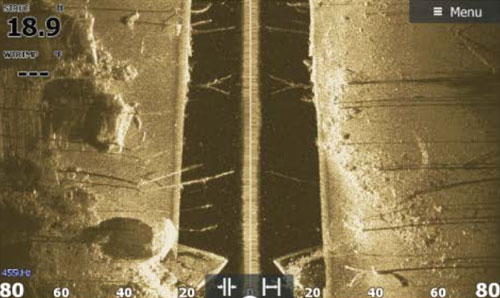 The broadband sonar uses CHIRP technology, to modulate each sonar pulse over a spectrum of frequencies, in order to provide superior target separation, filter noise, and deliver better detail for structure and fish. CHIRP sonar is such a powerful sonar technology that it allows you to sometimes see the targets separately in a baitfish cloud.

The display unit allows you to view both standard CHIRP sonar and StructureScan sonar in split-screen. Or, via the DownScan overlay, you can combine the standard CHIRP view with the DownScan view, for a better understanding of the targets and their positioning in relation to the boat or each other. 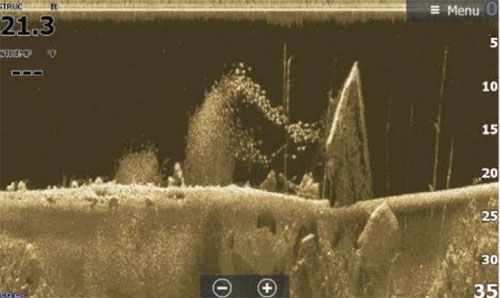 TrackBack is a function that offers your unit a fair amount of versatility. It’s actually a sonar recording function. To begin with, this function gives you the possibility to record and scroll back through the sonar log, to re-assess a specific spot if necessary. You can also mark waypoints on recorded sonar. Also, you can use the recorded sonar log, to customize your maps via Insight Genesis or StructureMap. Recorded sonar can be stored in the unit’s memory, or on a microSD card.

Another important sonar function characteristic of the Gen3 units including the HDS-7 is the SpotlightScan capability. This sonar feature is similar to the 360 Imaging offered by Humminbird. It requires an additional SpotlightScan transducer which should be mounted on your trolling motor. This sonar technology provides 360° photo-like clarity similar to SideScan, covering the bottom and water column under the boat.

Other sonar functions to be mentioned are Fish ID, Flasher sonar, Split Zoom, and Bottom Lock. Fish ID gives a fish icon to the sonar returns interpreted as fish. The Flasher function is a more abstract sonar view, in a circular layout, best to use for ice fishing. Split Zoom allows you to magnify a portion of the sonar view, and observe it in split-screen with the regular view. This works for DownScan as well. And finally, Bottom Lock is a sonar function that keeps the focus on the bottom, showing the bottom flattened in order to provide a better view of any targets close to the bottom.

As its name suggests, the HDS-7 Gen3 Insight comes with the preloaded Insight USA charts just like the HDS-9 Gen2 Touch Insight. These charts are meant for inland and coastal waters. The unit is also compatible with various other cartography packs, such as Insight Pro, Insight HD, TOPO Insight, Navionics, C-MAP MAX-N+, and others. Needless to say, the unit supports Insight Genesis personalized maps. In case you’re not aware, Insight Genesis is an online application that allows you to configure and customize your own maps, along with recorded sonar, or use the maps created by others.

StructureMap is also a very neat feature offered by the Gen3 units. This function works directly with the sonar, in order to instantly customize your maps, overlaying recorded or live sonar onto them for superior situational awareness.

Evidently, this unit is equipped with a powerful and quick-locking, internal GPS. With a 10 Hz position update rate, and WAAS/EGNOS corrections, it provides excellent accuracy. It can also use MSAS for correction, but in this case requires an additional, external antenna.

Like most advanced plotters, the HDS-7 Gen3 makes available the creation of waypoints, routes, and tracks. Its memory can store up to 5,000 waypoints and 200 routes. It can also track your course, being able to store 100 tracks, 10,000 points each. Waypoints, routes, and trails can be stored within the internal memory of the unit or can be saved on an extra microSD chip.

In terms of other navigation capabilities, this unit supports SiriusXM Marine Weather and audio, Broadband Radar, Class B AIS, and various autopilot systems such as SmartSteer, MotorGuide PinpointGPS, and Lowrance Outboard Pilot.

The Lowrance 000-11788-001 HDS-7 Gen3 Insight is one of the discontinued Lowrance fish finders. It is also a chartplotter equipped with a 10 Hz internal GPS and the Insight USA charts. It offers standard sonar, DownScan, and SideScan, as well as a fairly decent range of networking features including wireless connectivity. It includes the 83/200 kHz Skimmer transducer and the LSS-2 transducer. It’s a great unit for a wide range of boats, for both in-land and bluewater fishing.