Lowrance released several fish finders in 2020 and the Hook Reveal 9 TripleShot is one of them. It pretty much offers the same range of features as the Hook Reveal 7 TripleShot that we’ve already covered here but has a 9-inch display. It’s also one of the most affordable 9-inch fish finders with SideScan and DownScan at the moment. For reference, this is the Lowrance part number 000-15526-001, the one that includes the TripleShot transducer and is pre-loaded with the C-MAP U.S. Inland Basemap.

As its name suggests, the Lowrance Hook Reveal 9 TripleShot offers three types of sonar, these being standard CHIRP, DownScan, and SideScan. The unit does not support SpotLight Sonar, LiveSight sonar, or ForwardScan. It also supports multiple base frequencies, including 50/83/200 kHz for standard CHIRP, and 455/800 kHz for StructureScan (SideScan and DownScan).

The unit includes the TripleShot transducer which supports all three types of sonar provided by the unit. For 2D CHIRP is uses on conical beam with a coverage of 44° @ 200 kHz, with a depth capability of 500 ft. (153 m). Other traditional sonar frequencies are not available with this transducer, but you can always pair the unit with the classic Lowrance HDI skimmer, or with a 50/200 kHz transducer. 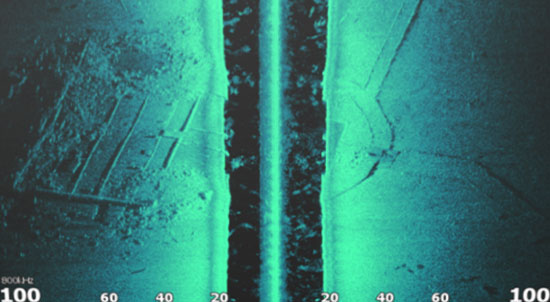 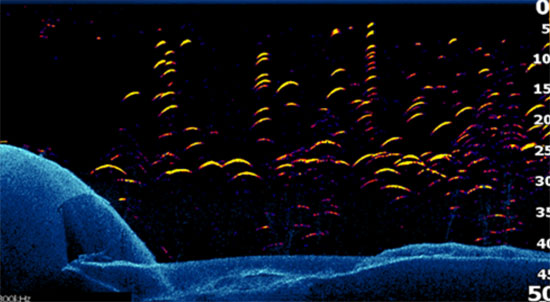 A transom mount is included with the transducer. Also, the TripleShot transducer integrates a temperature sensor, has 20 ft. (6 m) of cable, and an 8-pin connector.

As opposed to the older HOOK2-9 TripleShot fish finder, the Hook Reveal 9 TripleShot includes the new FishReveal feature. FishReveal offers the possibility to bring the fish arches from the CHIRP sonar into the DownScan view, and also opens specific FishReveal options.

As we’ve mentioned above, this is the Lowrance Hook Reveal 9 TripleShot part number 000-15526-001, the one that is pre-loaded with the C-MAP U.S. Inland Basemap. These charts cover more than 4,000 U.S. lakes with up to 1-foot contours, but as a general idea, they offer basic detail. On the other hand, the unit supports charts from Navionics and premium C-MAP charts. Among them, we can count Navionics Gold, Navionics+, Navionics Platinum+, C-MAP Insight Pro, and C-MAP Lake Insight. 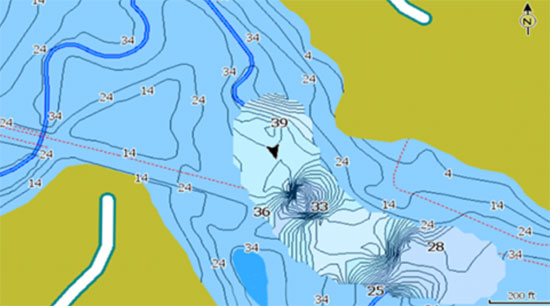 An important mapping feature added to the Hook Reveal units is Genesis Live. The previous Hook2 units don’t have this feature. Genesis Live uses the 2D sonar data and the GPS data to reveal and record the depth contours of the lake you’re scanning on the map. Therefore, is the current maps of the unit don’t offer satisfying detail and information for your favorite lake, you can create your own, custom fishing map.

It’s important to mention, though, that the Genesis Live feature cannot record the created maps in the unit’s memory. So, in order to create custom maps, you will have to load your unit with a blank microSD card.

The StructureMap application is also available with the Lowrance Hook Reveal 9 TripleShot, since it’s a SideScan fish finder. StructureMap gives you the possibility to overlay recorded images of the SideScan sonar on the map for additional awareness.

Needless to say, the unit has its own built-in GPS receiver. It supports WAAS, MSAS, EGNOS, and GLONASS for position augmentation. It has a GPS speed function and can save up to 3,000 waypoints in the unit’s memory.

Track recording and route creation functions are also available. The unit gives you the possibility to record up to 100 tracks with 10,000 per track, and create up to 100 routes. You can also convert any of your recorded tracks to a new route, add waypoints to it, and customize it as you like.

Although the unit supports premium charts and has a pretty decent navigation feature range, it does not support Radar, AIS, or VHF radio. It also does not support Auto-Pilot systems or external GPS units.

The Lowrance Hook Reveal 9 TripleShot features a 9-inch display with a pixel resolution of 800H x 480V. It’s a SolarMax display with integrated backlight for improved readability in direct sunlight. It is also IPX7 waterproof.

Unlike other Lowrance units, the Hook Reveal 9 TripleShot does not have touchscreen technology. The navigation through its menus and usage of its functions is done exclusively from its keypad on the right. The keypad includes an 8-way directional key, Zoom key, Enter/Exit key, Menu Access key, Waypoint on Cursor key, and on-off key. Its interface is very easy to use. Its homepage can be customized with various application combos for quick selection and the possibility to work with up to four applications in split-view.

The Hook units are some of the most affordable Lowrance fish finders, but they don’t have any networking features. This being said, the Hook Reveal 9 does not have Ethernet or NMEA ports. It also does not have WiFi or Bluetooth connectivity. It does have a microSD card slot, though, which you can load with more detailed charts from C-MAP or Navionics.

The Lowrance Hook Reveal 9 TripleShot is a fish finder and chartplotter featuring 2D CHIRP and SturctureScan sonar (DownScan and SideScan), GPS, C-MAP Inland Basemaps, and Genesis Live mapping. It includes the TripleShot transducer for High Wide CHIRP, SideScan, and DownScan. It also supports premium charts from Navionics and C-MAP via microSD card. However, it does not have networking features. It’s one of the most affordable 9-inch fish finders with SideScan and charts, one of the best from Lowrance for 2020.