The Hook Reveal 9 is one of the Lowrance fish finders released in 2020. As opposed to the Hook Reveal 9 TripleShot that we’ve already covered here, this particular model comes with the 50/200 kHz HDI deep water transducer and the Navionics+ charts for the U.S. and Canada. For reference, this is the Lowrance part number 000-15533-001.

The Hook Reveal 9 HDI Navionics+ fish finder offers two types of sonar, these being standard CHIRP and DownScan. It supports three main frequencies for standard (50/83/200 kHz), and two for DownScan (455/800 kHz). It does not support SideScan sonar or ForwardScan sonar.

The transducer included with the unit is the HDI Skimmer 000-10977-001. This transducer features a transom mount, 20 ft. (6 m) of cable, and also has an internal temperature sensor. It supports four frequencies, 50/200 kHz for traditional CHIRP which means that the unit will be able to use Low CHIRP and High CHIRP, and 455/800 kHz for DownScan.

For traditional CHIRP, the transducer uses two conical beams with a coverage of 12° @ 200 kHz, and 29° @ 50 kHz. The maximum depth capability that can be reached by the standard CHIRP sonar is 3,000 ft. (914 m) when using the 50 kHz beam. This makes the Hook Reveal 9 HDI a great unit for off-shore fishing.

In terms of standard sonar functions, the Hook Reveal 9 offers the full range. The list includes A-Scope, Split-Zoom, Bottom Lock, Fish ID, Sonar Recording, Sonar Autotuning, and more. Also, as its name suggests, the unit has the FishReveal function which offers the possibility to bring the fish arches from the CHIRP sonar into the DownScan view, and also opens specific FishReveal options. This gives you a better idea of the position of the fish in relation to vegetation, bottom, or structure. It’s a feature that the previous HOOK2-9 model does not have.

As the title suggests, the Lowrance Hook Reveal 9 HDI Navionics+ includes the Navionics+ maps for the United States and Canada. These charts offer superior detail to the standard US Inland maps that other Reveal units come pre-loaded with. The Navionics+ charts provide superior detail and information for each point of interest, depth contours, dynamic tides, and current information, shallow water shading, and more. They also open access to the Navionics SonarChart mapping application and this Lowrance unit supports it. 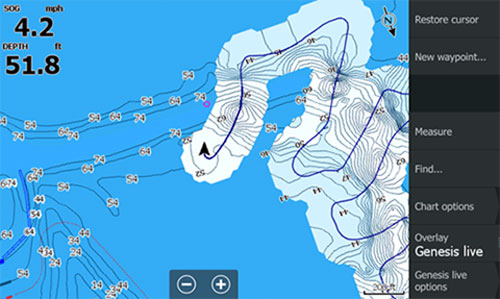 Of course, the unit has built-in GPS. It supports WAAS, MSAS, EGNOS, and GLONASS for position augmentation. It has a GPS speed function and can save up to 3,000 waypoints in the unit’s memory. The unit can also record up to 100 tracks (10,000 points each) and allows you to save up to 100 routes. Recorded tracks can be converted to routes and you can add waypoints to them later on.

The unit does not support Radar, AIS data, or VHF radio data. It also does not support Auto-Pilot units or external GPS. In case you’re looking for features like this, the HDS-9 Live or the Elite 9 Ti2 are the Lowrance fish finders to look at.

The Hook Reveal 9 HDI Navionics+ features a SolarMax 9-inch display color display with a pixel resolution of 800H x 480V. Its LED backlight offers excellent readability in direct sunlight at angles of 80° top/bottom, 85° left/right. The unit is also IPX7 waterproof which essentially means that its sealing allows it to support incidental water exposure (like rain or splashes) and even full immersions in freshwater.

The unit does not have touchscreen technology. It is keypad-operated. The keypad includes an 8-way directional key, Zoom key, Enter/Exit key, Menu Access key, Waypoint on Cursor key, and on-off key. Its interface is very easy to use. Its homepage can be customized with various application combos for quick selection and the possibility to work with up to four applications in split-view.

Unlike the Elite Ti2 and HDS Live units, this Lowrance Hook Reveal fish finder does not have any networking features. That’s why it’s a bit cheaper than most other 9-inch units. It does not support NMEA, it does not have Ethernet, and also does not have wireless connectivity. However, it does have one microSD card slot and supports cards up to 32 GB. You can either use a blank card for Genesis Live or data backup, or a card with different charts either from Navionics or C-MAP.

The Lowrance Hook Reveal 9 HDI Navionics+ is a fish finder and chartplotter unit offering deep water CHIRP sonar, DownScan sonar, GPS, Navionics+ charts, and the Genesis Live mapping feature. It includes the 50/200 HDI transducer for deep water fishing. It doesn’t have advanced navigation features such as Radar and also does not have networking features. But on the other hand, it costs a bit less than other similar networkable models. It’s a fairly decent, mid-range combo for boats of all sizes, great for both inland and off-shore fishing.