To begin with, the unit offers the same sonar features as the ICE HELIX 5 CHIRP G2 (the version without GPS).

Of course, since the unit’s sonar is Dual Spectrum CHIRP, it also supports the XNT 9 20 T transducer, the one included with the HELIX 5 CHIRP GPS G2, so it’s a year-round unit and can be used on a boat.

As opposed to the older unit, the ICE HELIX 5 CHIRP GPS G2 410970-1 offers 6 interference rejection settings (up from 5) for keeping competing sonar signals from cluttering the display of your unit and for delivering a clear view of what’s under the ice. It also offers a superior target separation of 3/4″ (up from 1.5″).

Since it’s a unit designed for ice fishing, it offers an advanced 1024-segment ice flasher, considerably better than the 526-segment fiber-optic flasher of the ICE-55 model. Along with the superior sonar segment number, the flasher also provides plenty of other readings, including Gain, Depth, Range, the diameter of the sonar beam based on depth, Battery Status, Zoom Range, and more. The unit can also read Temperature; however, the included transducer does not have an internal temperature sensor.

The unit also has Adjustable Sonar Zoom. This application allows you to focus the bottom of the lake or a certain suspended height in the water column for improved target detection. There is a 2X zoom for the flasher, and up to 8X zoom for the 2D sonar view.

First of all, the Humminbird ICE 5 CHIRP GPS G2 410970-1 (2019) has built-in GPS. It also supports GPS heading sensors. It has waypoint creation, route creation, and track recording functions. You can save up to 2,750 waypoints in its memory, you can create and save up to 47 routes, and record up to 50 tracks; each track can have up to 20,000 points. Each track can be converted into a route to which you can add waypoints if necessary. 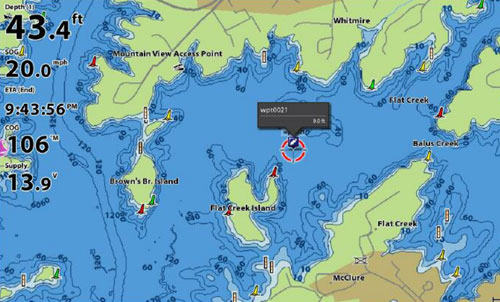 Similar to the other HELIX units, the ICE 5 CHIRP GPS G2 (2019) is equipped with the Humminbird Basemap platform. These charts cover more than 10,000 U.S. lakes with 1-foot contours. They also provide coverage for the entire U.S. coastline. This includes depth contours, navigation aids, spot-soundings, and a wide array of points of interest. Also, the unit is compatible with Navionics+, Navionics Platinum+, LakeMaster charts, LakeMaster Plus, and SmartStrike fishing charts.

The new AutoChart Live Ice feature is also included with the 410970-1 unit. This is a depth contour recording application similar to the AC Live included with most other HELIX GPS units, but since it is optimized for contour recording while on ice. Therefore, it gives you the possibility to create your own personalized fishing maps with the most up-to-date contours. It also includes LakeMaster features like Depth Highlight, Water Level Offset, or Shallow Water Highlight.

The Humminbird ICE HELIX 5 CHIRP GPS G2 410970-1 unit features a 5-inch, 256-color LCD display with LED backlight, and a pixel resolution of 800 x 480. Its waterproof rating is IPX7 which means it can withstand incidental water exposure and rain.

The unit does not have touchscreen technology; it is keypad operated. It has a highly-intuitive interface and allows the usage of up to two applications in split-screen.

One of the new features included with the 410970-1 unit is the Jig Charge Mode. This application allows you to light up your unit in order to charge your glow-painted lures so you won’t have to use a flashlight or a different device if fishing in low lighting conditions.

The unit does not have Ethernet like the ICE HELIX 7 CHIRP GPS G3N All-Season. It also does not have wireless connectivity. It does have a microSD card reader, though, which you can load with Navionics or LakeMaster charts, or with a blank card for backups or software updates.

Last but not least, the unit includes the ice fishing portable kit. This consists of a carrying case with a built-in cable wrap, a 9 Amp Hour battery, a charger for the battery, plus the power cable and the transducer with its cable.

The Humminbird ICE HELIX 5 CHIRP GPS G2 410970-1 offers Dual Spectrum CHIRP sonar with a 1024-segment flasher, GPS, Humminbird Basemaps, and AC Live Ice. It includes the Xi 9 1521 ice transducer and the portable kit with battery and charger. It’s a fish finder designed for ice fishing, but it is also compatible with other HELIX transducers and can be used on a boat. It’s a versatile fish finder and chartplotter, offering excellent value for the price.