The ICE HELIX 7 CHIRP GPS G4 All-Season is one of the Humminbird fish finders released in 2021. As opposed to the older G3 All-Season pack, this one includes the newer G4 unit which has a richer pixel resolution, and of course, the newer Premium Shuttle which is way more versatile than the older one. For reference, this is the Humminbird part number 411760-1.

This Humminbird All-Season fish finder pack includes the HELIX 7 CHIRP GPS G4 unit. This unit has only one sonar technology, this being Dual Spectrum CHIRP. It does not support Down Imaging, Side Imaging, or 360 Imaging. It supports three main frequencies, this being 50 kHz, 83 kHz, and 200 kHz. 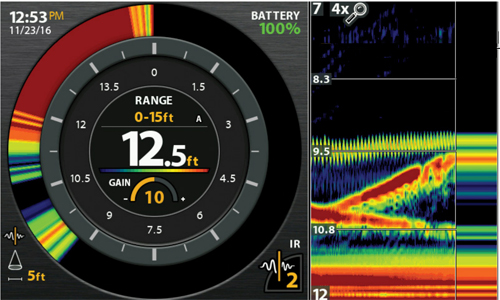 The XNT 9 HW T transducer is basically the one included with most fish finder units that do not have structure scanning sonar. It’s a Dual Spectrum CHIRP transducer that uses the High CHIRP channel. The unit offers three sonar modes that can work with this transducer. These are Full Mode (150-220 kHz), Wide Mode (140-200 kHz), and Narrow Mode (180-240 kHz). The Wide and Narrow modes have fixed intervals, but the Full Mode is adjustable. The transducer uses conical beams with a coverage of 42° for Full and Wide Modes, and 25° for Narrow Mode. Its maximum depth capability is 1,200 ft. (365 m).

Although it does not have SI or DI, the unit offers an extensive standard sonar feature range. For example, it has a high-detail digital Circular Flasher mode for ice fishing that you can view in split-screen with the regular sonar view. Among other features, we can count Selective Fish ID, A-Scope, Bottom Lock, Adjustable Sonar Zoom, Interference Rejection, Sonar Recording, and more.

The ICE HELIX 7 CHIRP GPS G4 All-Season offers a similar range of navigation features to the older G3 series, but with one exception. It supports CoastMaster charts, along with the other compatible chart options available, such as Navionics Gold/HotMaps, Navionics+, Navionics Platinum+, LakeMaster, LakeMaster+, and SmartStrike. 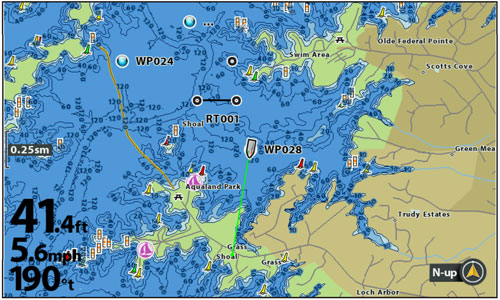 Of course, the unit comes pre-loaded with the standard Humminbird Basemap chart platform. These charts offer both inland and coastal coverage for the United States waters. For example, they cover more than 10,000 U.S. lakes with 1-foot contour detailing, as well as data for depth markers, buoys, hazards, marinas, nav-aids, and various other points of interest. 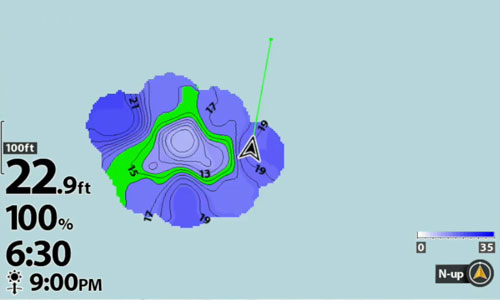 The unit also has the AutoChart Live ICE feature. This is a bathymetric mapping feature that uses the sonar data and the GPS data for mapping the depth contours of your lake. Differently put, you can scan different ice holes then display the layout of depth contours in a larger area. Features like depth highlight, shallow water highlight, and water level off-set are also available with AC Live Ice.

The unit’s internal GPS operates at 10 Hz. This means it can provide position updates 10 times per second. A GPS speed feature is also available, so in case you will be using your unit on a boat, it can calculate the boat’s speed based on the GPS input. The unit also offers the possibility to save up to 2,750 waypoints in its memory, record up to 50 tracks, and create up to 47 routes.

The HELIX 7 CHIRP GPS G4 unit features a richer pixel resolution than the G3 model. Although it is also 7″ in diagonal, 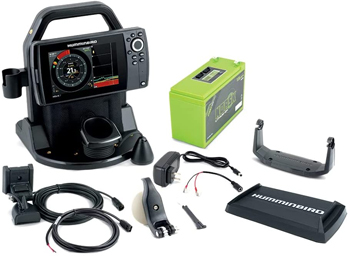 its pixel matrix is 1024H x 600V (up from 800H x 480V). Needless to say, this is quite an improvement as the unit provides crisper imaging. The unit also has LED backlight and a Jig Charging mode. This allows you to crank the screen brightness up in order to charge glow-painted lures.

The unit is keypad-operated. It does not have touchscreen technology. It has the +/- Zoom keys, the View key, the Check/Info key, the Menu Key, the Mark Waypoint key, the Go-To / MOB key, the Exit Key, the 4-direction cursor key, and the On/Off button.

Since it’s a G4 unit, and not a G4N (N stands for “networking), it does not have networking features. It does not have NMEA, Ethernet, or wireless connectivity. However, it does have a microSD card slot which allows chart upgrades, software updates, waypoint and data back-up, as well as sonar recordings.

The biggest improvement for the All-Season pack included with this Humminbird fish finder, is the new Premium Shuttle. This not only that it’s bigger than the previous model, it also has a larger handle, multiple 1/4” holes for mounting accessories, an internal master power switch, and comes with quick-connect SAE power cables. It offers superior cable and transducer management possibilities and includes two rod holders.

On the list of accessories included with the All-Season pack are also a 15Ah lithium battery with a 15+ hours of runtime, a charger for the battery, a silicone screen cover for the unit, the Gimbal mount for installing the unit on a boat, and an extra transom mount with a suction cup for the XNT 9 HW T transducer. The whole fish finder doesn’t come with a bag like the previous models, but it does have a back at the back for the battery, cables and charger.

It’s important to mention that the battery has two USB slots which can be very handy as you can charge your phone or power other devices as well. It also has a bettery indicator.

The Humminbird ICE HELIX 7 CHIRP GPS G4 All-Season is a complete fishing pack for both ice fishing and boat fishing. The unit has Dual Spectrum CHIRP sonar, GPS, and the Humminbird Basemap. The pack includes the Premium Ice Shuttle, two transducers (for ice and boat), and multiple accessories such as a 15Ah lithium battery, charger, rod holders, unit cover, gimbal mount for the unit, and more.