The HELIX 7 CHIRP MDI GPS G4 is one of the fish finders released by Humminbird in 2021. In terms of features, it is pretty similar to the HELIX 7 CHIRP MDI GPS G3 that we’ve already covered here, and comes with the same transducer. However, it has a display richer in pixels and is compatible with the new CoastMaster charts. For reference, this is the Humminbird fish finder part number 411610-1.

The Humminbird HELIX 7 CHIRP MEGA DI GPS G4 is equipped with two sonar technologies. These are Dual Spectrum CHIRP and Down Imaging. Of course, as its name suggests, it has the MEGA Down Imaging mode as well. The unit supports multiple base frequencies. The list includes 50/83/200 kHz for standard CHIRP and 455/800/1200 kHz for Down Imaging.

The unit includes the XNT 9 HW MDI 75 T transducer. This is a High Wide CHIRP transducer and only supports the 200 kHz range for the Dual Spectrum CHIRP sonar. It comes with a transom mount, 20 ft. (6 m) of cable with a 4-pin connector. It also has a built-in temperature sensor, while the unit not only can indicate water temperature, it also has a Temperature Graph feature. 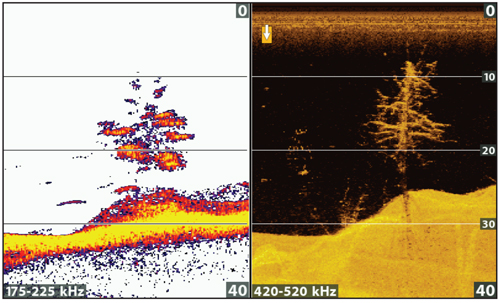 The Dual Spectrum CHIRP, the transducer casts conical beams and supports the three sonar modes (Full, Wide, Narrow) provided by the unit. The Full Mode covers the whole High CHIRP range (150-220 kHz) while the beam has a 42° angle. The Wide Beam covers a frequency range between 140-200 kHz and has the same 42° coverage. And finally, the Narrow beam’s CHIRP range is 180-240 kHz and has a coverage of 25°. The maximum depth range that can be achieved with this transducer is 1,200 ft. (365 m) when using the Dual Spectrum CHIRP Wide Mode.

Nonetheless, the unit offers the full range of standard sonar features. It has a Circular Flasher mode for ice fishing, A-Scope, Fish ID+, Bottom Lock, WhiteLine, Structure ID, SwitchFire, various alarms, and more. It also has Sonar Recording, but in order to use this feature, you will need a blank microSD card. The unit cannot save the sonar log in its memory.

The Humminbird HELIX 7 CHIRP MEGA DI GPS G4 is equipped with a 10 Hz internal GPS receiver. This means it can provide position updates 10 times per second. It also has a GPS speed function and supports WAAS, MSAS, EGNOS, and GLONASS for position augmentation.

Since the unit is a chartplotter as well, it has route creation, waypoint creation, and track recording functions. You can save up to 47 routes in its memory, up to 2,750 waypoints, and up to 50 tracks. Each track can have up to 20,000 points and can, later on, be converted to a route.

Of course, the unit supports various premium charts as well, so you can upgrade its chart base at any time. The list includes Navionics Gold & HotMaps, Navionics+, Navionics Platinum+, LakeMaster, LakeMaster Plus, CoastMaster, and the SmartStrike fishing charts. Plus, the unit has the AutoChart Live feature. This gives you the possibility to create your own bathymetric fishing maps. The unit can record up to 8 hours of charts but you can always opt for a Zero Lines microSD card which is specifically designed to AutoChart Live mapping; this card offers virtually endless AC Live mapping capacity.

The unit does not support radar like the G4N models. However, it does support AIS data, external GPS, and GPS sensors. It is also compatible with i-Pilot Link, and supports Minn Kota motors.

The HELIX 411610-1 features a 7-inch display, WSVGA type, full-color, with LED backlight and a pixel resolution of 1024H x 600V, considerably richer than the older models which only have a pixel matrix of 800H x 480V. This leads to clearer imaging. The unit is also IPX7 waterproof which means it is built to withstand rain or incidental water exposure.

The unit does not have touchscreen technology, just the side keypad. It has quick keys for MENU, GO TO, Mark (waypoints), Zoom, (+/-), View, Exit, and Power. It also has the large cursor control key. Its interface is highly intuitive and easy to use.

Since it’s a G4 unit (not G4N), it does not have superior networking features like NMEA 2000, Ethernet, or wireless connectivity. It also does not have a USB or an HDMI port but does have a microSD card slot for chart cards or data cards. It does support NMEA 0183, though.

Last but not least, the unit comes with the standard Gimbal mount. However, the unit cover and the in-dash mounting kit are not included.

The Humminbird HELIX 7 CHIRP MEGA DI GPS G4 is a fish finder and chartplotter offering Dual Spectrum CHIRP, MEGA DI sonar, and includes the XNT 9 HW MDI 75 T transducer. It has built-in GPS, comes with the Humminbird Basemap, and also has AutoChart Live. It is a great fish finder for a wide range of boats, for both freshwater and blue water fishing and navigation.