The HELIX 12 CHIRP GPS G4 is one of the largest units of the HELIX G4 series at the moment. It’s not too different from the HELIX 10 CHIRP GPS G4N that we’ve already covered here, but has a larger (12.1″) display with a richer pixel matrix. For reference, this is the Humminbird fish finder part number 411430-1.

Although it’s one of the largest HELIX units, HELIX 12 CHIRP GPS G4N only has standard CHIRP sonar. It does not have Down Imaging or Side Imaging sonar. It also does not support 360 Imaging. It supports three main sonar frequencies, these being 50/83/200 kHz.

The unit comes with the XNT 9 HW T transducer which includes a transom mount. It has 20 ft. (6 m) of cable and an internal temperature sensor. The unit also has a Temperature Graph function which can be handy especially if you’re looking for certain water currents or for water temperature fluctuations. 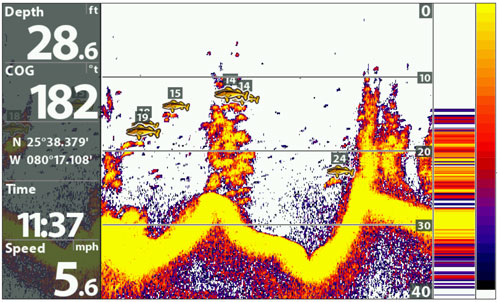 The unit’s sonar is Dual Spectrum CHIRP. This being said, the unit can use three High CHIRP modes with the included XNT 9 HW T transducer. There are Wide, Narrow, and Full. For the Narrow Mode (180-240 kHz), the sonar beam has a coverage of 25°. For the Wide Mode (140-200 kHz), the beam offers a coverage of 42°. For the Full Mode, you can use the whole CHIRP range, and the beam coverage is variable, with a maximum angle of 42°.

This Humminbird HELIX unit is equipped with a 10 Hz internal GPS. This means it can offer position updates 10 times per second. Needless to say, it can show your coordinates or the coordinates of any point of interest on the map. It supports WAAS, EGNOS, and MSAS for position augmentation, and also has a GPS speed function.

In terms of charts, the unit is pre-loaded with the Humminbird Basemap. This chart platform offers coverage for the United States inland and off-shore waters. It covers more than 10,000 lakes with superior detail and 1-foot contours. It also shows a lot of data with regards to day markers, buoys, hazards, marinas, and other points of interest, etc. 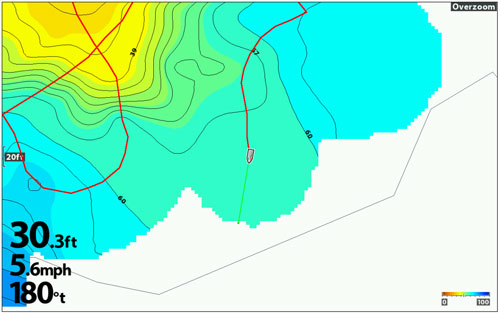 The unit supports various other premium charts. The list includes Navionics Gold & Hotmaps, Navionics+, Navionics Platinum+, SmartStrike fishing charts, LakeMaster, LakeMaster Plus, and the new CoastMaster charts. The unit also has the AutoChart Live feature for bathymetric mapping. Thus, you can create your own custom fishing charts. Plus, if paired with a Navionics card, it can use the Navionics SonarChart feature which is essentially the same thing as AC Live.

Similar to the other G4N units, the HELIX 411430-1 offers superior networking features. Therefore, it can communicate with various other boating instruments. It supports CHIRP Radar, Minn Kota i-Pilot Link, and can communicate with Minn Kota motors and Cannon Optimum downriggers. It also supports AIS data, external GPS sensors, and more.

The HELIX 12 CHIRP GPS G4N features a WXGA color display, 12.1 inches in diagonal, with a pixel resolution of 1280H x 800V and LED backlight. It does not have touchscreen technology like the Solix units, only the side keypad. Its interface is very easy to use and highly intuitive. Also, the unit is IPX7 waterproof which means it can withstand incidental water exposure.

As we’ve mentioned above, the unit has superior networking features. To begin with, it has built-in Ethernet and NMEA 2000 ports which means you can easily connect it to an already existent boat grid in order to communicate with other boating instruments, such as Radars, AIS units, VHF radio, etc.

Bluetooth and WiFi connectivity are also available. This being said, you can sync it with your smartphone in order to get smart notifications from your phone, easily get software updates, download charts, backup waypoints or other data, and more. You can also pair it with Talon or Raptor shallow water anchors, or Cannon downriggers.

The unit has a dual SD card slot which you can load it with Navionics or LakeMaster charts. It comes with the standard Gimbal mount. A unit cover is also included.

The Humminbird HELIX 12 CHIRP GPS G4N is a fish finder and chartplotter featuring Dual Spectrum CHIRP sonar, GPS, Humminbird Basemaps, AutoChart Live, superior networking features such as Ethernet and NMEA 2000, as well as wireless connectivity (Bluetooth and Wi-Fi). It also includes the XNT 9 HW T for High CHIRP scanning. It’s a great unit for a wide range of boats, for both off-shore and inland fishing and navigation.