The wels catfish (Silurus glanis) is one of the largest freshwater fish found in Europe and Western Asia. It is only surpassed in terms of size by the beluga sturgeon (Huso huso). It can exceed 9.8 ft. (3 m) in length and 440 lbs (200 kg) in weight. Evidently, due to its possible size and combativeness, it is sought out by anglers as a sport fish. It’s also valued as food throughout Eurasia, however, the largest specimens aren’t recommended for consumption. 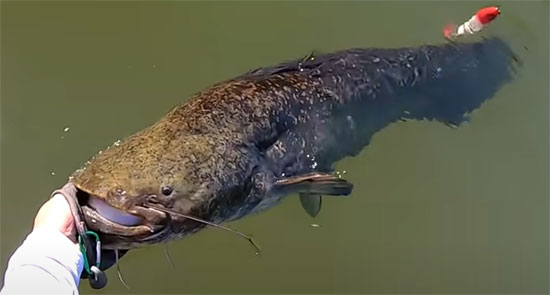 In this post, we’re going to cover the most important aspects regarding wels catfish fishing. We’ll point out here, the best weather conditions and water temperature, where they hang out throughout the year, what are the best baits, as well as the best tackle for these giants.

Wels catfish can be found in a variety of habitats. But in general, they prefer large and deep bodies of water, such as lakes, slow-flowing rivers, and channels. They typically search for locations that provide cover, such as structure, vegetation, or sunken trees, as well as holes in the riverbed. It can thrive in both clear water, well as degraded habitats such as eutrophic and turbid canals or water holes.

The wels catfish is both scavenger and predatory. Like most freshwater benthic fish, it primarily feeds on other bottom-dwelling organisms like gastropods, annelids, crustaceans, and other fish. It’s not exactly picky; it will basically attack anything that fits in its mouth. When it’s introduced to a certain environment, it usually feeds on the most abundant available species of a suitable size. Also, as a specimen grows in size, its diet can include larger fish, birds, rats, or other larger aquatic fauna.

Generally, wels catfish feed mostly at night but can be caught throughout the day. During hot or cold days, they tend to stick to their hiding places and not move much. They become more active at dusk when they leave their hiding places in search of prey.

Wels catfish are the most active when water temperature reaches 68 – 71°F (20-22°C). This is the optimal temperature range required for their successful spawning; this is when they’ll bite more aggressively during the day.

When the water temperature drops below 59°F (15°C), they won’t move as much, but they’ll still bite if the lure or bait drops in the vicinity of their hiding places. During heat waves and high water temperatures (above 86°F / 30°C), they’ll feed less during the day, but at night, their fishing can still be very productive.

Rain and wind don’t seem to be huge turn-offs for wels catfish feeding. On the contrary, depending on habitat, rain can actually be a big plus. For example, in clear water creeks or channels, wels cats are more inclined to attack prey on the surface. Rain hits plenty of insects and other organisms, placing them on the water surface – easy prey for the cats.

Wind can complicate fishing conditions, but normally, it shouldn’t influence the cats’ feeding significantly. A windy day can still be rewarding when still-fishing with heavy sinkers and heavy baits, while casting lures, especially on a small creek with a lot of vegetation and obstacles can be problematic.

Where To Look For Wels Catfish By Season

In winter when the water is cold, wels catfish pretty much shut down. In large bodies of water, they will move to the deepest spots, typically with muddy bottoms, and will basically hibernate until spring. Occasionally, they can still be caught if the bait or jig is dropped right in front of them.

In spring, as waters start to warm up, wels cats wake up from their slumber and begin feeding, but at a rather slow rate. This time of the year, they mostly scavenge, feeding on the fish or other organisms that didn’t make it through the winter. That’s why, in early spring, stink baits, strips of dead fish, especially oceanic oily fish like sardines or mackerels can produce excellent results. This time of the year, they’ll still be in the deeper spots of the lakes or rivers.

In late spring and summer, as the water warms up, cats will once more turn predatory. Although they’ll typically stick to sheltered locations from where they can observe and ambush their prey, they’ll move considerably more than in the cold season. Especially at night, they will leave their hiding places and move closer to the shores in search of food.

During fall, as the water temperatures begin to fall, wels catfish feed less and start moving back to the deeper spots of the water bodies. However, their fishing can still be productive, both on lures and baits.

There are two fishing methods largely used throughout Europe for catching wels cats. These are lure casting (or stalking) and bank fishing (or still fishing). However, regardless of the method you employ, you’ll need medium-heavy or heavy gear as cats are tough fighters and weigh heavily on the line.

Even if you aren’t targeting monster catfish, it’s always a good idea to go for a beefy rod, 3-4 lb test curve and 10-12 ft. long, for still fishing and casting heavy baits. With a rod in this range, you should be able to handle even a 60-70 lbs catfish without worrying that it’s going to fail you.

If you’re stalking catfish on creeks, from the boat, or from the shore, a 2-2.5 lbs test curve rod should do, as you’ll probably deal only with cats up to 30 lbs.

A beefy rod obviously calls for a beefy reel. For still fishing, it’s best to go either with a spinning reel within the 6000-10000 range, or, if you prefer baitcasting gear, a baitcaster between 500 – 800.

Here are a few recommendations:

The fishing line strength depends on the catfish you’re targeting. For example, if you’re going after the big ones in large bodies of water, you should use no less than 80 lbs braided line, with a 100 lbs breaking strain leader.

On the other hand, if you’re working with lures and target smaller cats, in canals or creeks, braided line between 20-60 lbs test with a leader a notch sturdier than that should do.

Wels catfish have extra large mouths so you don’t need to be shy about the size of the hooks. Plus, you’ll be using fairly large baits. So, as a general idea, you’ll need hooks with a wide gap. The most popular hooks for cats are circle hooks, octopus hooks, Kahle hooks, and sickle hooks. Size 4/0 should cover most catfish specimens, but if you’re working with smaller baits, sizes 1/0 – 3/0 should do. Always look for brands like Gamakatsu, Mustad, and DAM.

Although the wels catfish feeds mainly on fish (dead or alive), crustaceans, and annelids, it can be caught on a variety of baits, sometimes even weird baits like pieces of hot dog, cheese, or even soap. But in general, most anglers use natural bait, dead or alive.

Dead baits like sardines or cut baits such as pieces of mackerel, herring, or other oily fish are perfect, especially in spring. That’s because when the water is still cold, cats haven’t completely entered their predatory mode, so they still locate their food by scent. Liver or chicken intestines are also used. If you’re going to use liver, bovine liver is the best choice as it’s denser, more fibrous, sticks better to the hooks, and can be cut into long strips. Shrimp, crayfish tails, frogs, or river mussels can work as well.

Stink baits and pellets of various mixes are also largely used for wels cats. Many use carp boilies or pellets that were previously soaked in fish oil. Dog food dry pellets can also be effective. But since they’re not easy to mount on a hook, some anglers ground them and devise their own pellets of different shapes, sizes, and consistencies, easier to mount on hooks or hair rigs. Of course, stink baits aren’t exactly the most agreeable fishing baits. That’s because it can be very difficult to remove the scent from your hands after using them, or you’ll have to use rubber gloves. Plus, since most of them have a very strong scent, instead of enjoying some fresh air, you and everyone around you, will “enjoy” the foul smell of the catfish bait.

Of course, each country, region, or fishery has its own rules regarding catfish baits. So, before heading out on the water, it’s best to check and double-check what’s allowed and what isn’t.

Catching catfish on lures is a lot of fun. In general, the best lures for wels catfish are the ones that make a lot of noise. Also, if you’re going to use lures, don’t be too shy on the size, especially if you’re targeting cats above 15-20 lbs.

For topwater, poppers take the cake. Color doesn’t matter that much when it comes to these, but it’s best to use the ones that imitate pike or perch, in a range of 5 – 8 inches.

In terms of submerged lures, spinners, crankbaits, or multi-joined lures can produce excellent results as they generate a lot of vibration which will definitely alert any catfish nearby.