Since it’s a TripleShot unit, this HOOK2-7 model is preloaded with three sonar technologies, thus the “TripleShot” term. These are Side Imaging, Down Imaging, and Wide-Angle CHIRP Sonar. The unit also includes the TripleShot transducer which supports all these three types of sonar. The box includes a metallic transom mount for it, but the TripleShot transducer can also be mounted on a trolling motor. This transducer has approx. 20 ft. (6 m) of cable and an 8-pin connector. It also incorporates a water temperature sensor.

For the SideScan and DownScan sonar technologies, the TripleShot transducer uses oval, thin beams. It’s also important to mention that for SideScan and DownScan, the system doesn’t use CHIRP sonar. The frequencies used for these types of sonar are 455 kHz and 800 kHz. The side beams of the SideScan sonar can reach 300 ft. (91 m) on each side at 455 kHz, and 100 ft. on each side at 800 kHz. Also, the depth capabilities for these types of sonar with the TS transducer can go up to 300 ft. (91 m). 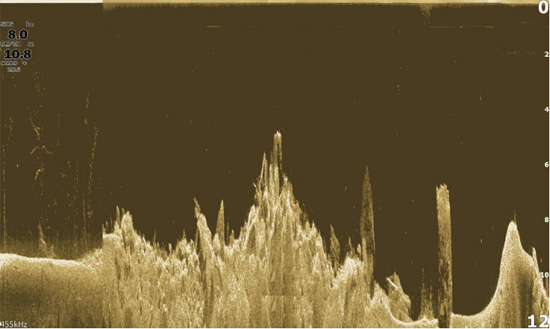 For the 2D sonar, the system uses Wide-Angle CHIRP Sonar technology which offers a better target separation and depth capability. For this type of sonar, the transducer uses a conical beam with a coverage of approx. 40°. Its depth capability is approx. 500 ft (152 m).

Like all the other HOOK2 units, the 000-14294-001 has the Sonar Autotuning function. This auto-calibrates your fish finder in order to provide the best image by adjusting the sonar settings as the water conditions change. It can definitely save you some time with the tweaking of your sonar for the particular spot you’re fishing.

The unit does not have the new FishReveal function as the Elite-9 Ti2 unit, for example, but does have the Overlay DownScan application which allows you to use DownScan basic functions in the 2D sonar window. The unit also has a wide array of standard sonar features, including Fish ID, TrackBack, A-Scope, Bottom Lock, Surface Clarity, Fish Alarm, etc.

As the name of the bundle suggests, the Lowrance HOOK2-7 TripleShot Navionics+ comes with the Navionics+ charts. These charts, however, are not built-in the unit. They come on a microSD card which you will have to insert into the unit. These charts cover both the U.S. and Canada waters providing superior detail and a lot of information regarding points of interest, depth contours, dynamic tide current information, or features like Shallow Water Highlighting, and much more. 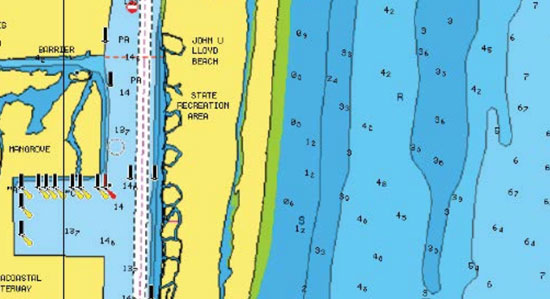 The Navionics+ charts also make available the SonarChart feature. This is a depth contour mapping application that allows you to reveal and record the depth contours of your lake as you sail. This way, you can benefit from the most up-to-date depth contours information for a certain body of water and create your own, personalized fishing maps. However, the unit does not have the Genesis Live feature like the Elite Ti2 units or the new HDS Live units. Therefore, you won’t be able to record depth contours without the Navionics+ card.

Of course, the unit is preloaded with the U.S. Inland base charts which offer less detail and information than the additional Navionics+ charts. So, in case for some reason you don’t want to use the better Nav+ charts, your unit still has you covered in terms of charts.

The HOOK2-7 TripleShot unit integrates a high-sensitivity GPS receiver. Like any GPS system, it can show the coordinates of any location or point of interest. It can also use the EGNOS, WAAS, and MSAS satellites if they’re available in your area. Plus, it has a GPS speed function and can indicate the speed of your boat based on the GPS data.

The unit can save up to 3,000 waypoints in its memory. It has a route creation function and a trail recording function. You can save up to 100 routes with up to 50 waypoints per route, and 100 trails with up to 10,000 breadcrumb points per trail. Of course, each trail can be converted into a route and retraced You can select to record trail points based on time, distance, or by letting the unit position a point automatically when a course change occurs.

Last but not least, it’s important to mention here that the HOOK2-7 TripleShot does not support Radar, AutoPilot, AIS or radio units. So, in case you want the extra networkability, you will have to opt for an Elite or HDS Live unit.

The Lowrance HOOK2-7 TripleShot Navionics+ unit features a 7-inch LCD display, SolarMax type (and with adjustable backlight), offering excellent readability in direct sunlight. Its pixel resolution is 800H x 480V, and the unit is also IPX7 waterproof which means it can withstand incidental water exposure with no problem.

The unit has a highly intuitive and easy to use interface. It allows you to customize its home page with the most used applications or split-views. It offers the possibility to view and work with up to four applications in split-screen. However, it does not have touchscreen technology; its usage is done exclusively via the side keypad.

As we’ve mentioned above, the HOOK2-7 TripleShot is not networkable. It doesn’t offer NMEA or Ethernet support. It only has two connectors, one for the power cable and one for the transducer. However, it does have a microSD card reader which can take cards up to 32 GB, and which you will have to load-up with the included Navionics+ card.

Finally, the box includes the classic tilt mount for the unit, corner clips, and a transom mount for the transducer. However, it does not include a unit cover.

The Lowrance HOOK2-7 TripleShot Nav+ is a fish finder and chartplotter offering TripleShot sonar (SideScan, DownScan, and 2D CHIRP), GPS, and Navionics+ charts. It includes the TripleShot transducer and also has the U.S. Inland basic chart platform built-in. It’s one of the most affordable 7-inch units with side-scanning sonar and fits a wide array of boats.