As we’ve mentioned above, the HELIX 5 CHIRP DI GPS G2 410220-1 comes with the XNT 9 DI T transducer, the one that integrates a temperature sensor and basically supports all the unit’s frequencies. It has a transom mount and 20 ft (6 m) of cable.

This unit is capable of three frequencies: 200/455/800 kHz. For DualBeam Plus sonar (2D) it uses 200/455 kHz frequencies, and due to the fact that it has CHIRP technology, the sonar pulse can be modulated between 420-520 kHz and 175-225 kHz. Also, for Down Imaging, the pulse modulation covers 420-520 kHz and 790-850 kHz. CHIRP sonar is superior to traditional sonar, due to the fact that it provides a better target separation, clearer images without clutter, and better depth penetration. 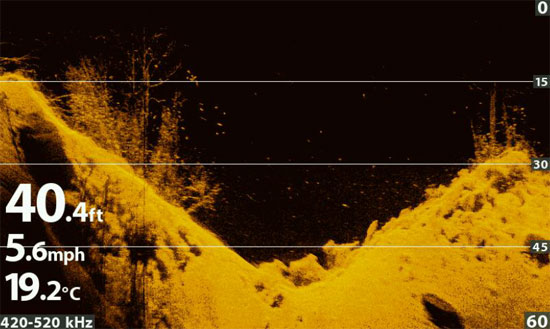 For 2D the supplied transducer uses conical beams, of 16° (455 kHz) and 28° (200 kHz). For this type of sonar, the system’s depth capability is 600 ft (183 m). Also, since the unit’s 2D sonar is DualBeam Plus, it means that it can use both its frequencies simultaneously, and you can observe the returns of both beams in split-screen. The 2D traditional mode is great to use when looking for fish targets, as it points them out as arches (or fish symbols if you use the Fish ID mode). Also, its color-coding offers a good idea about the bottom hardness.

For Down Imaging, the transducer uses thin beams, not conical, with angles of 45° (800 kHz) and 75° (455 kHz). As you can see, in DI mode, the system offers a better coverage. However, the depth capability of DI sonar is only 350 ft (106 m). Down Imaging is a sonar mode great to use for observing structure, vegetation, and for understanding shapes better. Also, when used in split-screen with traditional sonar, it helps a lot in telling fish apart from structure.

As a little conclusion here, this unit is recommended for in-land fishing, as the system’s depth capability is reduced in saltwater. However, it should be able to maintain a bottom reading off-shore as well, if you don’t exceed depths greater than 300-400 ft.

Another aspect to be mentioned here is that the unit is compatible with various external sonar modules, such as 50 kHz Airmar CHIRP. Equipped with this type of sonar, its depth capability can be increased to 2,500 ft (762 m).

When it comes to vessel speed, the system should be able to maintain a bottom reading at speeds up to 30 MPH. However, the recommended speed range for the clearest images and the highest target detection rate is 1-6 MPH.

There are several other functions available with this unit. For example, SwitchFire is a quick filter function, that gives you the possibility to quickly swap between Clear Mode and Max Mode. The Clear Mode view removes most of the clutter, leaving only the strongest targets and the bottom on screen. This way, you can focus on the bigger fish targets only. Max Mode offers a view with all the sonar information that the system was able to detect, thus you will be able to see more fish arches and other targets.

The Selective Fish ID+ is a sonar view that replaces the fish arches (or at least the sonar returns that are considered fish) with fish symbols. The depth of each fish symbol is displayed above it. The color of the fish symbols indicates the sonar beam that has caught them. For example, the fish detected by the 200 kHz beam will appear orange, while the ones in the 83 kHz beam will appear green. A Fish Alarm is also available with the Fish ID+ mode. This fish alarm has 3 settings. You can enable it to sound for Large, Large/Medium and All fish targets detected.

Sonar Recording is another useful function offered by the HELIX 5 CHIRP GPS G2. This allows the rewind of the sonar feed, giving you the possibility to review a specific spot if you want a second look, without returning to re-scan that place. This function requires a blank microSD card as support for the recording.

Bottom Lock and Real-Time Sonar (or A-Scope) are also available with this unit. The Real-Time Sonar (or A-Scope) function is a vertical flasher view, which appears on the right side of the 2D sonar view, and indicates the strength of the most recent sonar return. So, basically this function lets you know when a fish return is directly under the boat. Bottom Lock gives you the possibility to focus the bottom and a certain portion of the water column near it. This function places the view at a constant point in relation to the bottom, regardless of depth changes, which sort of “flattens” the contour, but on the other hand is more effective at showing fish targets that are close to the bottom.

Last but not least, a Circular Flasher function is also available with this unit. This sonar mode puts the sonar information in a ring-based diagram. The intensity of each sonar return is displayed in various colors on the outer circle. It’s a great function to use when ice fishing or for stationary fishing.

As the unit’s name suggests, this unit integrates a GPS system. It has an internal GPS module, offering quick fixes, and with an accuracy of 2.5 m. Fixes can be enhanced by WAAS, EGNOS and MSAS. The vessel’s speed is also covered by the GPS system. The unit can also store up to 2,500 waypoints, 45 routes and 50 tracks, each track with up to 20,000 track points.

As we’ve mentioned above, the unit is preloaded with the Humminbird Basemap platform which offers considerably more detail than the previous UniMap or ContourXD which were the previous base chart platforms included with most HELIX units. The Humminbird Basemaps cover more than 10,000 U.S lakes with 1-foot depth contours, and also provide coverage for coastal waters, showing depth markers, buoys, hazards, marinas, nav-aids, and various other points of interest. The unit is also compatible with the Navionics+, Navionics Platinum+, LakeMaster, LakeMaster Plus, and SmartStrike fishing charts. However, it does not support the older Navionics Gold & HotMaps. 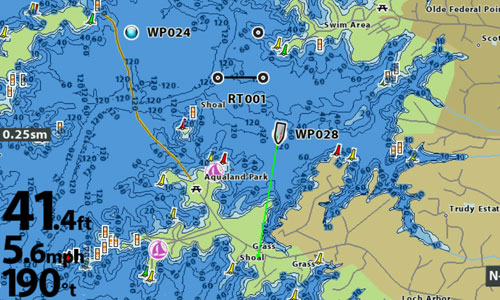 AutoChart Live is also available with the HELIX 5 CHIRP DI GPS G2. This is a mapping feature that gives you the possibility to create your own fishing charts. It uses the 2D sonar and the GPS data to reveal and draw the depth contours of the lake that you’re scanning. Thus, even if the included charts don’t offer sufficient detail for your lake, AC Live still has you covered. Also, in case you will opt for a Navionics+ charts card, the unit supports the SonarChart Live application which is a similar feature.

The HELIX 5 CHIRP DI GPS G2 features a 5-inch display, 16-bit color, with a pixel matrix of 800H x 480V. This means it offers pretty clear, focused images for both sonar and charts. The display also integrated LED backlight, offering excellent reading possibilities even if the sunlight hits it directly, or if you’re fishing at night. The navigation through the menus and functions is done via the keypad on the right. This unit does not have touchscreen technology, such as the HDS-9 Gen2 Touch from Lowrance, for example.

The unit comes with a gimbal mount, but there’s also the option of an in-dash mounting kit. Also, in terms of connectivity, this Humminbird fish finder and chartplotter has an NMEA 0183 output and a microSD card reader with one slot, for charts upgrades, sonar recordings, snapshots, or software updates.

One more aspect to mention here is the unit’s waterproof rating. It’s rated as IPX7, which means that it can resist incidental water exposure such as rain, snow, or splashes. It can even resist full immersions in freshwater, up to 1 meter and 30 min. However, saltwater is best to be kept away from its connectors.

The HELIX 5 CHIRP DI GPS G2 is a fish finder and chartplotter from Humminbird, featuring DualBeam Plus and Down Imaging sonar with CHIRP, GPS, and Humminbird Basemap charts. The box also includes the XNT 9 DI T transducer. It’s a unit recommended for fresh water fishing, but it should work in saltwater as well, if you don’t exceed 3-400 ft depths. Along with the CHIRP sonar improvement, it also has AutoChart Live, giving you the possibility to map any body of water revealing the newest depth contours. Its internal charts may not be the best, but the good news is they’re upgradable. It’s a system great for boats of all sizes. Thus, considering that it’s a CHIRP capable unit, comes with a transducer that covers all its sonar functions, has GPS and excellent charting capabilities, we can safely say it offers a decent price / value ratio.