Although many of the Humminbird fish finders in the PiranhaMax series have been discontinued, the series is far from being dead. In fact, several models are still available. The 197c DI is one of them.

The main aspect to know about the Humminbird PiranhaMax 197c DI is that it does not come with any navigation features, nor is compatible with any. In other words, with this small unit, you won’t have any GPS or mapping. It’s a basic fish finder. However, the sonar includes Down Imaging technology, and the unit comes with the transducer to support it. 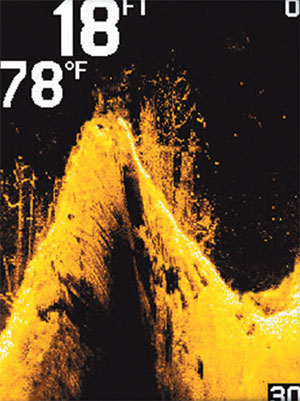 and Down Imaging. The DualBeam sonar is capable of two frequencies, 200 kHz and 455 kHz, while the Down Imaging sonar only supports 455 kHz.

Like most Humminbird units, this one also as the Fish ID+ function, which can be more helpful when using standard sonar. This sonar mode uses advanced signal processing to show a fish symbol on the screen, for each return that meets a certain amount of requirements to be considered a fish. Fish ID+ has 3 different sizes of fish icons: the bigger the icon, the bigger the fish.

The 197c DI PiranhaMax does not have a temperature graph feature, nor has a temperature alarm. However, the transducer does have temperature sensor built-in. As specified above, the standard transducer that comes with this unit is a transom type. However, in case you want a different type, such as a trolling motor, or thru-hull, you can call Humminbird and ask for a replacement. They will replace it for free.

What’s Best About This Unit

You get Down Imaging sonar technology for less than $200, and a 256 TFT color screen. It’s a small unit, great to have on a kayak or small bass boat. Easy to install and use, straightforward menus and navigation through the unit’s options.

No navigational features, and very few options for an upgrade. But on the other hand, those are some of the main reasons this unit comes at such an affordable price.

The Humminbird PiranhaMax 197c DI is a great choice if you’re looking for a basic fish finder, and don’t want to spend a bundle on navigational features that you may not use at all. It’s ideal for fishing in shallow waters, but it gets the job done even for depths up to 600ft. Lastly, since it has Down Imaging, it is a much better fish finder than one which comes only with classic sonar, as it will give you the possibility to distinguish much better between structure and fish, and actually find more fish.