The HELIX 7 DI GPS is one of the first Humminbird units capable of AutoChart Live. It’s one of the units released in 2016 and was discontinued in 2018 (?). One of the newer and more inclusive models is the HELIX 7 CHIRP MEGA DI GPS G3N.

Nonetheless, this Humminbird fish finder may still be available at certain retailers. It’s a chartplotter as well, featuring GPS and the older ContourXD mapping. For reference, this is the Humminbird part number 409930-1.

The HELIX 9 DI GPS is meant to replace the 959ci HD DI Combo unit, which was discontinued at the end of 2015. As opposed to the older unit, this new HELIX model features a wider screen, 9-inch in diagonal as the name suggests. The display has the same aspect ratio as the older unit though, 16: 9 and 800H X 480V pixel matrix, but overall, the new control unit features a smoother layout. The unit is also LED-backlit, covers a 65,000 color spectrum, and has an IPX7 waterproof rating, being able to withstand incidental water exposure and even immersions.

One of the best aspects regarding the new HELIX 9 DI GPS unit is its superior processor. It’s actually 25% faster than any of the 900 units, offering faster image updates for maps and sonar.

In terms of connectivity, this unit has a lot to offer. First of all, it’s Ethernet capable, therefore you can share sonar or various other data through Ethernet cable between unit. It also features NMEA 0183 and NMEA 2000 ports, therefore integration in a boat’s already existent grid, or communication with other compatible devices shouldn’t be a problem. The unit offers two microSD card slots, quite useful for data backup, data transfer, and upgrades.

Last but not least, the unit comes with a gimbal mount, but there’s also the option of an in-dash mounting kit. The box also includes a unit cover.

First of all, like all other units from Humminbird, the HELIX 9 DI GPS comes with the transducer that supports the unit’s sonar, which is the XNT 9 DI T transom transducer. It has 20 ft (6 m) of cable and incorporates a temperature sensor, the control unit being able to provide information regarding water temperature. Even more, this unit offers the temperature graph function, which allows you to observe easily the temperature variation for all water areas that you scan.

This particular transducer is a Down Imaging dedicated one. It can broadcast on 3 frequencies: 200/455/800 kHz. 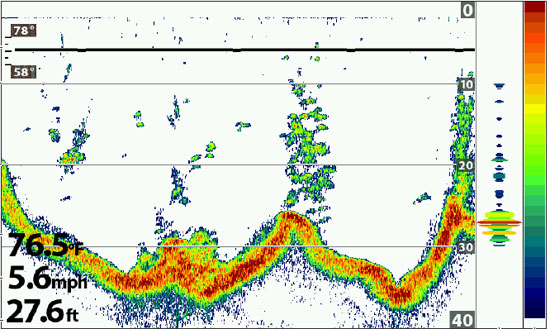 Since the standard 2D sonar of this Humminbird fish finder is DualBeam Plus, both frequencies can be used simultaneously, and viewed either in split-screen or blended together. The Switchfire function is also available in 2D, function that allows a quick sonar filtering, making it easy to alternate between the full sonar information on the screen and zero clutter.

Other useful functions available under the sonar section of this unit are Selective Fish ID+, RTS (A-Scope), Split-Zoom, Bottom Lock, Screen Snapshot, and Sonar Recording. The Selective Fish ID+ view is only available in 2D sonar mode and gives you the possibility to replace fish arches in the sonar view, with fish symbols. Each fish symbol has its depth next to it. Although not all sonar returns that have been assigned a fish symbol are actually fish, this particular function still gives you a better idea about the fish that are in a particular spot and their current depth. 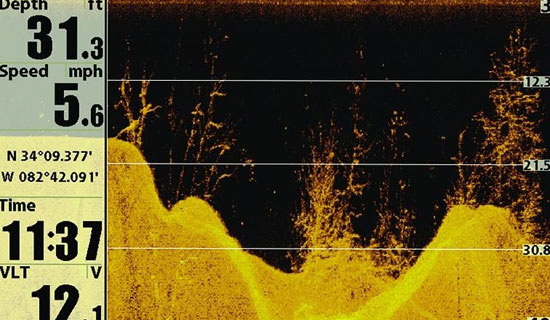 Real-Time Sonar (RTS) is a 2D vertical flasher function that can be viewed next to the 2D view. It provides the sonar information caught by the most recent sonar echo. Bottom Lock is a sonar function that always graphs the bottom, at a constant point in relation to the bottom, regardless of the changes in depth. It sort of “flattens” the bottom, but it’s great for revealing bottom-feeding fish, or structure where fish might be hiding. Split-Zoom, as terminology suggests, allows you to view a section of sonar in split-screen, each view at different zoom levels.

Screen Snapshot and Sonar Recording are two similar functions. The first one allows you to save screenshots, of both sonar and maps, and save them on a microSD card. Sonar Recording gives you the possibility to record the sonar feed and even rewind it to re-view certain spots. This is quite a useful function as it can save you a lot of trouble. For example, you may not need to turn the boat around to re-scan a certain location, if you want a second look. Via recorded sonar, you can also mark waypoints on recorded areas.

The Humminbird HELIX 9 DI GPS comes with the built-in ContourXD professional charts pack. These charts cover more than 3,000 U.S. lake maps, featuring channels, depth contour lines, boat access points, major roads, and interstates. Although they don’t offer the detail of LakeMaster or Navionics charts, they’re still inclusive enough to improve your situational awareness by a lot. Also, they’re quite more inclusive than the UniMap charts, available with the less expensive models. 3D charts view is available with the 2D view on this unit.

The GPS incorporated in the unit is the same Precision module available with various other units. It’s actually quite a fast GPS/WAAS receiver that provides quick and accurate locks, with an accuracy within 2.5 meters. The unit is capable of storing up to 2,750 waypoints, and 45 routes (50 wp per route). It also has a track recording function, being able to record up to 50 tracks (20,000 points per track). Saved tracks can also be used as routes, and you can add waypoints to them if you want.

A notable function available with all the HELIX 9 units is the AutoChart Live, which gives you the possibility to map any body of fresh or saltwater. The charts created via AutoChart Live provide features similar to the Humminbird LakeMaster charts, including highlight depth, shallow water highlight, and water level offset. On top of that, maps created with AutoChart Live are compatible with i-Pilot Link. In other words, you can set up your unit to follow a specific depth contour, with your boat on automatic pilot.

In terms of sonar, this unit is compatible with the Humminbird 360 Imaging. As opposed to the HELIX 7 and HELIX 5 DI GPS, this unit can use a 50 kHz transducer, and can be used for higher depths in 2D. Also, you can replace the XNT 9 DI T transducer with a different, compatible one via the transducer replacement program supported by Humminbird.

When it comes to maps, this HELIX unit is compatible with Navionics Platinum+, Navionics Gold/HotMaps, and LakeMaster charts.

The unit’s internal software is upgradable. And last but not least, the unit is compatible with various other modules, such as AIS, HD Radar or Minn Kota or PowerDrive V2 motors via i-Pilot Link.

One of the newest functions introduced for fishfinder and chartplotter combos by Humminbird is wireless control. This unit does have this feature and it’s compatible with the AS RC1 Bluetooth remote control. This accessory features 7 keys with short and long press functions, which give you the possibility to navigate through menus, mark waypoints, change views etc, without touching the unit. The screen is wide and bright enough to provide a good view even from several feet of distance. Therefore, this particular function may save you a lot of trouble.

The HELIX 9 DI GPS is one of the most inclusive Down Imaging units from Humminbird, at the moment. It offers an impressive array of navigation and sonar features, all in a unit with an elegant, yet durable design. It’s also a fast unit, compatible with various other technologies from Humminbird and other manufacturers. On top of that, for a 9-inch combo, it is an affordable unit. At least a few hundred dollars cheaper than a similar unit with CHIRP.