The HELIX 5 Sonar GPS is one of the 5-inch combo units released by Humminbird in 2014. Since then, several new versions were released, and this particular model was discontinued. However, it’s still available at various retailers. For reference, this is the Humminbird part number 409610-1.

Even though the head unit of this Humminbird fish finder model appears to be similar to the other units in this series, this one is not compatible with Down Imaging or Side Imaging. Even if you purchase a transducer that supports this type of technology, the head unit of this model won’t be able to display these types of sonar technology. 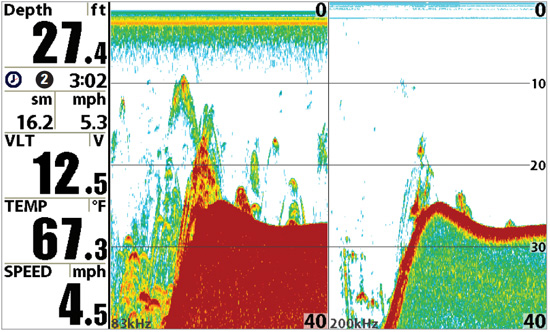 The box includes a transducer though, the XNT 9 20 T model with a transom mount, a transducer that supports the regular Humminbird Dual Beam Plus sonar, with a frequency/coverage of 200 kHz / 20° and 83 kHz / 60°. The transducer incorporates a temperature probe, rendering the unit able to supply temperature readings. The fact that the sonar is DualBeam Plus, means that you can view both sonar beam return simultaneously, in split screen, or blended together.

The fish finding capabilities of the HELIX 5 Sonar GPS don’t stop here. This unit has quite several aces up its sleeve when it comes to this. First of all, it has the SwitchFire mode feature, which allows a quick view of the full information available in the transducer beam, for more fish arches and better jig tracking, or a quick noise clearing, focusing on fish size accuracy.

The Selective FishID+ is another, more suggestive sonar feature that focuses on fish size. This function enables the fish finder to show fish symbols instead of fish arches, also distinguishing three size intervals, small, medium and large. Although not all the sonar returns which are assigned a fish symbol are fish, there still are anglers who find this feature more useful than the regular sonar view, so it’s a plus to have.

There’s also an Ice Flasher sonar function, which puts the sonar returns into a circular setting. This function is intended for stationary fishing or ice fishing. It does not display fish arches but displays the sonar returns through lines of various colors. Once you master it, it’s actually a great sonar function to have, for detecting the movement of the fish, or the distance between your lure and the fish.

Sonar recording is another useful feature to have. It allows you to record the sonar returns for a certain area that you might want to review later. However, the sonar recording function requires a blank SD card inserted in the SD card slot of the unit, as the recording cannot be saved within the internal memory of the unit. Nonetheless, the recorded data can be uploaded to your computer via a SD card reader, you can attach them to maps, or photos of the fishing spots etc.

This unit gives you the possibility to give waypoints to your favorite fishing spots, or various other locations that might be of interest to you. The routes function allows you to connect various waypoints to create a better path for navigation. Each route can contain 50 waypoints. The tracks function is actually a record of your navigation history, displayed in a breadcrumb trail of track points. Each track can have up to 20,000 track points. The head unit has the capacity to store up to 3,000 waypoints, 45 routes, and 50 tracks. However, you can also back them up, or save extra ones on a blank SD card. 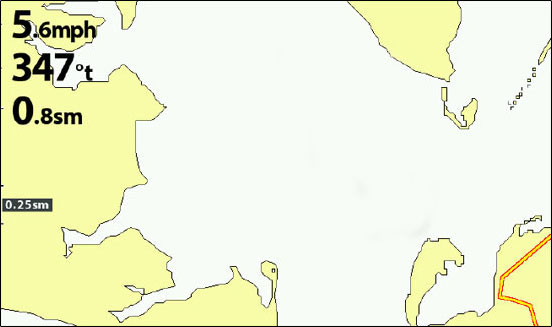 Two neat GPS related functions that you will get with the HELIX GPS are the Drift Alarm and the Bird’s Eye View. The Drift Alarm is a function that allows you to set a perimeter around your boat, and if your anchored boat will drift away from the set perimeter, an alarm will notify you.The Bird’s Eye View function gives you a 3D overview of your track, and the chart’s land contour, from a point above (from a “bird’s point of view”). By moving the cursor keys, you can shift the view left or right, which gives you a much better perspective on a specific area.

When it comes to maps, this Humminbird Helix model comes with the UniMap package built-in. These maps are pretty basic, covering the contiguous U.S. coastline, inland lakes, and rivers at 30 m / pixel. They also do not offer any port, tide or current information. However, this unit can support Humminbird Mapping or Navionics Gold/HotMaps, therefore you can upgrade the charts for better detail and information.

To begin with, this unit is a rather small one, offering a display of 5″ in diagonal, just about the size of the display of your average smartphone. However, when compared with the 600 series units, or several models from Garmin or Lowrance within this price range, this HELIX model offers a better screen layout, with an 800H x 480V pixel matrix. This gives you a better perspective of the split-screen view of the unit.

The display had LED backlight. Therefore you will benefit from excellent readability at night, or during a bright day. The unit IP67 waterproof, submersible in fresh water at up to 1 m (3 feet), and up to 30 minutes, and it’s also dust-tight. It comes with a gimbal-type mount, but there’s also the option of an in-dash mount.

Since it doesn’t have all the fancy features, this unit is quite easy to operate. It also has upgradeable software, via HumminbirdPC. Humminbird releases software updates every few months, and keeping your unit up to date may bring about new, or improved functions.

Even though it doesn’t have fancy sonar features, such as SI or DI, and comes with basic charts, the HELIX 5 Sonar GPS still is one of the best units that you can find, considering its price, quality and capability ratio. It’s an affordable unit which still offers a considerable amount of useful fish finding and navigational functions, a great tool to have whenever you go out on the water.