The GPSMAP 7610xsv is one of the units released by Garmin in 2017, and also one of the discontinued Garmin units. It’s a highly versatile multifunction display, offering a wide array of navigation and sonar features and capabilities. Since it’s one of the older units, it is pre-loaded with the LakeVü HD and BlueChart g2 charts. Also, it does not include a transducer. For reference, this is the Garmin part number 010-01306-13.

The Garmin GPSMAP 7610xsv has three sonar technologies built-in, these being dual CHIRP sonar, CHIRP ClearVü, and CHIRP SideVü. For traditional 2D CHIRP sonar, it supports either 50/200 kHz or 77/200 kHz transducers, offering the possibility to scan in Low, Med, or High CHIRP. Also, since it’s dual-frequency capable, you can use both 2D beams simultaneously if you pair the unit with a dual-frequency transducer, and view their returns in a split-screen format.

For SideVü and ClearVü, it supports 260/455/800 kHz. This type of structure scanning sonar also uses CHIRP technology for superior imaging, a better target separation and detection, and less clutter on the display. The CHIRP frequency intervals depend on the transducer used. 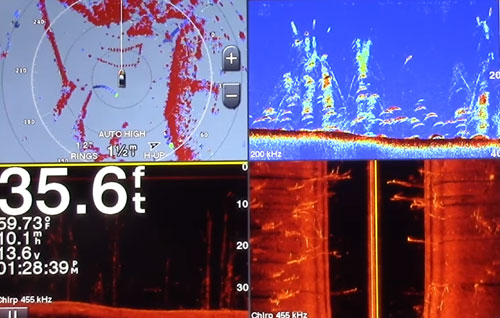 As we’ve mentioned above, the Garmin GPSMAP 7610xsv does not include a transducer. It is, however, compatible with a wide array of transducers from Garmin and Airmar. The list of compatible transducers for this Garmin fish finder includes the GT23M-TM, the GT30-TM, GT22HW-TM, GT15M-TM, GT41-TM and many more.

The GPSMAP 7610xsv is also compatible with gWind, gWind Wireless, and gWind Race transducers via an NMEA 2000 network and a GND 10 Black Box bridge.

In terms of standard sonar features, the GPSMAP 7610xsv offers the full range. To begin with, it has the Fish Symbols, A-Scope, Bottom Lock, Depth Line, Sonar Noise Rejection, Various Alarms, and more. Water Temperature readings are also available if the unit is paired with a transducer that integrates a temperature sensor. And finally, the unit offers Sonar Recording and Sonar Rewind features. Of course, in order to record sonar, a data card is required. Approx. 15 minutes of recording should take 200 MB of memory space from the data card.

Like most advanced MFD units, the Garmin GPSMAP 7610xsv has built-in GPS. It uses a 10 Hz GPS internal receiver which provides position updates 10 times per second. It can provide corrections and position enhancements via GLONASS, WAAS, and EGNOS. Of course, a GPS speed function is also available; therefore, the unit can calculate the speed of your boat by using the data provided by the internal GPS system.

Waypoints, tracks, and routes functions are included. The unit can save up to 5,000 waypoints in its memory, and up to 100 routes. You can also record and save up to 50 tracks, with 50,000 points per track. Each saved track can be converted into a route to which you can add waypoints and re-trace at any time.

The GPSMAP 7610xsv has two built-in chart platforms, the U.S. LakeVü HD, and the BlueChart g2. The LakeVü HD are inland charts and cover more than 17,000 U.S. lakes, reservoirs, and rivers, and from these lakes, more than 6,700 offer 1-foot contours. These charts also include interstates, general roads, highways, bridges, designated fishing areas, marinas, dock, boat ramps, and other points of interest.

Safety Shading and Multiple Depth Range Shading are available features with these charts. These features allow you to designate a minimum navigational depth, or color code up to 10 different depth ranges in order to view your target depths at a glance.

The unit is compatible with LakeVü HD Ultra, and BlueChart g2 Vision. These charts not only that offer superior detail and several other features, but they also make available the Enhanced Auto Guidance feature. This technology instantly searches through the existent charts to create a virtual pathway to help you avoid low bridges, shallow water, and other charted obstructions en route. It can also calculate arrival times depending on various factors and time-critical events.

The Quickdraw Contours application is also available with this unit. This is a feature similar to the AC Live from the Humminbird units. It’s an application that uses the GPS and the 2D sonar in order to reveal and draw the depth contours of the current body of water. Therefore, if the integrated charts do not offer satisfying depth information for your lake, you can create your own personalized map for it.

In terms of navigation and awareness tools, this GPSMAP 7610xsv from Garmin supports array or dome radar modules. For example, you can pair it with an xHD2 open array radar like the GMR 1224 or GMR 1226, or an xHD dome radar, such as the GMR 24. It also supports VHF radio units and AIS units, such as the VHF 210 AIS Marine Radio, and a wide array of other tools and sensors, such as autopilot integration, heading sensors, SiriusXM receivers, and many more.

The SailAssist feature base is also included. These features basically form a pre-race page which indicates your virtual starting line along with other data such as laylines, enhanced wind rose, time to burn before the start, race timer that you can sync with other Garmin GPS units, and more.

Last but not least, unit has built-in Wi-Fi which allows you to sync it with your smartphone or tablet for data streaming. Not only that, if you install the ActiveCaptain app on your smart device, but you can also benefit from a better marine experience management. This app allows you to connect to the Garmin Quickdraw Contours Community to upload and download already created charts via the Quickdraw Contours feature. You can perform trip planning, pre-fish a lake via ActiveCaptain, and even get smart notifications from your phone on your chartplotter.

The Garmin GPSMAP 7610xsv is equipped with a 10″ diagonal, WXGA color display, with a pixel resolution of 1280H x 800V. It has a super-bright display, with adjustable LED backlight which offers at least 70° visibility from any angle. It’s also IPX7 waterproof, which essentially means that it’s built to withstand incidental water exposure and even full immersions in freshwater, up to 1 meter.

The unit has a multi-touch interface, and it is operated just like a tablet. It does not have a side keypad, like the GPSMAP 1242xsv model, though. Its interface is highly intuitive; you can personalize its homepage with the most used applications or app views for quick access. It offers the possibility to work with up to 4 applications per view, via split-screen. For example, you can view and work with your 2D sonar, SideVü sonar, charts and radar simultaneously.

The unit has two NMEA 0183 input and output ports, and it is also NMEA 2000 compatible. As we’ve mentioned above, it can communicate with many other navigation and sonar instruments through an NMEA network, such as radar modules, external GPS, AIS units, GSD 24 or GSD 26 sonar modules, and can also share data with other Garmin units from the 500xs or 700xs series that you may already have installed.

The unit offers Axis and FLIR camera support and can be used for surveillance and situational awareness. Evidently, if used for this purpose, it offers multiple screen stream possibilities and responds to pan-tilt and pinch-zoom commands. The unit has 2 composite video input ports and one DVI-D output port. IP camera integration is also possible via an Axis encoder.

As we’ve mentioned above, the unit has Wi-Fi wireless connectivity, so you can connect online with it if a hotspot is available, but it also has Bluetooth connectivity. This being said, it can control Fusion-Link devices or Garmin Meteor devices. Plus, it can be controlled via GRID remotes or RF Wireless remotes.

The unit has a dual SD card reader. Therefore, you can use a data card for sonar recordings, or waypoint backup, and a charts card simultaneously, without the need to swap cards all the time for different purposes.

Finally, the box includes a unit cover, a bail mount with side knobs, and a flush mounting kit.

The Garmin GPSMAP 7610xsv is a multifunction display that offers a wide array of navigation, sonar, and networking features and capabilities. It has built-in dual-frequency CHIRP sonar, ClearVü, SideVü, and is also Panoptix capable. It includes the US LakeVü inland and BlueChart g2 coastal charts have built-in GPS and support Radar, AIS, external GPS, FLIR and Axis cameras, NMEA 2000 and many other boating or fishing instruments. It’s definitely a highly versatile unit, and despite the fact that it does not include a transducer, it offers excellent value for the price.