The GPSMAP 1040xs is one of the Garmin discontinued units. Unlike the Garmin GPSMAP 741xs, this isn’t a touchscreen model, featuring keypad navigation, this being one of the reasons for its lower price compared with other units of this size. It’s a fish finder and chartplotter, featuring LakeVü and BlueChart g2 charts, and ClearVü sonar. For reference, this is the Garmin part number 010-01184-01, the one that does not include a transducer.

The Garmin GPSMAP 1040xs features several types of sonar. To begin with, it has traditional 2D CHIRP sonar and ClearVü CHIRP scanning sonar. It’s CHIRP SideVü sonar capable, but for this sonar technology, you will need a GCV™ 10 scanning sonar module. Panoptix sonar is also included, but in order to use any of these features, you will need a special Panoptix transducer.

The unit is capable of several base frequencies. For example, it supports 50/77/200 kHz transducers for 2D traditional sonar and 260/455/800 kHz transducers for ClearVü. Depending on the transducer used, the sonar pulse can be modulated on a frequency interval, for better detail. For example, if paired with the GT23M-TM transducer, it can use a frequency range of 80-160 kHz for HD-ID (differently put, Mid-Band CHIRP), and 245-275 kHz / 445-465 kHz for ClearVü. 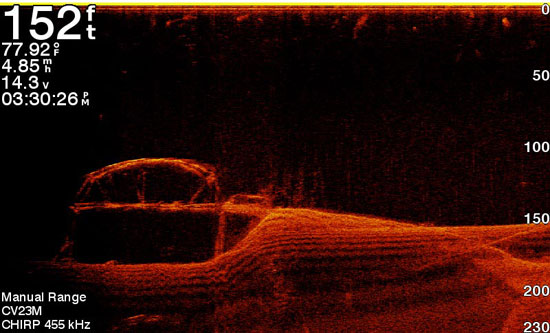 The system’s depth capability and coverage are also strictly related to the transducer. For example, with the Airmar B260 transducer, it can scan depths up to 2,700 ft (823 m) in saltwater, at 1 kW power output. Or, with a 500 Watts Garmin dual-frequency transducers, it can reach depths of 1,750 ft (533 m), also in saltwater. The beam widths that you can expect, depending on the selected transducer, are between 12°-45° for HD-ID and between 30°-50° for ClearVü. In general, most transducers will use conical beams for classic sonar, and thin-shaped beams for ClearVü.

As we’ve mentioned above, this unit is Panoptix sonar capable. This means it has the Panoptix sonar application built-in, but in order to use it you will need a Panoptix transducer, such as the Panoptix PS30, or Panoptix PS21-TR. The Panoptix sonar technology allows you to see the bottom, structure, and fish moving in real time around the boat, even if you remain stationary. Differently put, you can actually see fish attacking your lure, or observe the movement of your lure through the water.

With a Panoptix Down transducer, the unit makes available several related features, including LiveVü Down, RealVü 3D Down, and RealVü 3D Historical. LiveVü Down shows real-time moving sonar images right below the boat. RealVü 3D Down scans the area below the boat front to back and side to side, in order to provide a 3D real-time moving images. The RealVü 3D Historical will scroll through the sonar data as the boat moves to show the history of entire water columns – from the bottom to the surface and all of the fish in between.

With a Panoptix Forward transducer, the unit will make available two other features, LiveVü Forward and RealVü 3D Forward. The LiveVü forward scans the water column in front of your boat, providing a 2D real-time moving image of fish, structure, vegetation etc. RealVü 3D Forward scans the area in front of the boat, creating a 3D view of the bottom, structure, and fish, feature great to use when you are stationary and need to see the bottom and the fish approaching the boat.

The basic sonar features offered by most of the cheaper units are also available with the GPSMAP 1040xs. In other words, this unit has A-Scope, Fish Symbols, Sonar Alarms, Sonar Recording, Color Gain, Bottom Lock etc.

This Garmin unit is equipped with a 10 Hz high-sensitivity GPS/GLONASS providing position and heading updates up to 10 times per second. Evidently, it provides latitude and longitude information, also being capable of calculating your boat’s speed. The unit can record up to 5,000 waypoints, 100 routes, and 50 trails, with up to 50,000 trail points.

In terms of charts, the Garmin GPSMAP 1040xs comes preloaded with the LakeVü HD and BlueChart g2 coastal maps.

The LakeVü HD bundle offers highly detailed freshwater maps, covering more than 17,000 U.S. lakes, reservoirs, and rivers. Included in those there are more than 13,000 HD lakes with 1-foot contours shoreline to shoreline. These charts also include interstates, general roads, highways, bridges, designated fishing areas, marinas, dock, boat ramps and other points of interest. On top of that, the LakeVü chart bundle has the Shallow Water Shading function which allows you to assign a minimum depth to avoid when navigating or when looking for fishing areas with greater depths.

The BlueChart g2 are charts for off-shore fishing, covering the U.S. coastal waters and the Bahamas. These charts offer information and navigational aids including spot soundings, depth contours up to 1-foot, tides, currents, harbors, and marinas. They also offer the Depth Range Shading function which allows you to color code up to 10 depth ranges in order to view them at a glance.

Quickdraw Contours is also available with this unit. This function uses the 2D sonar data and the GPS data, allowing you to scan a certain body of water in order to instantly create your own personalized HD fishing maps with 1-foot contours. This way, even if a certain lake within the unit’s bundle isn’t covered in detail for your liking, you can re-draw the contours. You can also share the charts you create with this function via the Quickdraw Community on Garmin Connect.

To begin with, the GPSMAP 1040xs features an SVGA color display, 10.4″ in diagonal, with a pixel resolution of 800H x 600V and LED backlight. It doesn’t have touchscreen technology such as the 741xs model but does feature quite a versatile keypad for the navigation and usage of the functions.

The unit has wireless technology and you can sync it with your smartphone or tablet which has the BlueChart Mobile app, in order to import charts or marine routes wirelessly. The Garmin Helm app allows you to view and control your Garmin chartplotter directly from a smartphone or tablet using OS or Android. You can easily switch between portrait and landscape mode to accommodate mounting preferences. Also, via this app you can record the usage of your unit and save it for a later review, or share it with friends.

In terms of networking, this unit has NMEA 0183 and is NMEA 2000 capable. It’s equipped with a dual microSD card reader for chart upgrades, data backup, etc. It doesn’t have a video port or Ethernet but does support AIS, Fusion-Link, DSC, Garmin Meteor, and GCV Black Box sonar.

Finally, the box includes a bail mount, a flush mount kit, and a protective cover.

The Garmin GPSMAP 1040xs is an advanced chartplotter and fish finder, offering superior sonar technologies such as ClearVü and Panoptix. This is the 010-01184-01 which does not include a transducer but it is compatible with a wide array of transducers from Garmin and Airmar. It’s equipped with a high-sensitivity, fast 10 Hz internal GPS and comes preloaded with the LakeVü HD and BlueChart g2 cartography. It has excellent networking capabilities, including NMEA 0183, NMEA 2000, wireless connectivity and also integrates a dual microSD card reader. In all, it’s a multi-function unit that can make a huge difference for both fishing and navigation, when you’re on the water.