The Simrad GO5 XSE offers a feature range quite similar to the Lowrance Elite-5 Ti model. It’s a touchscreen chartplotter and fish finder unit, with advanced sonar features including StructureScan and ForwardScan, advanced GPS and a wide cartography support. In this review, we’ll address the Simrad GO5 XSE part number 000-12675-001, the one that includes the TotalScan transducer.

The TotalScan transducer can operate at 83/200 kHz for the traditional broadband (2D) sonar, and 455/800 kHz for StructureScan (DownScan & SideScan). Also, since the unit’s broadband sonar has CHIRP technology, the system is capable of Mid Range CHIRP and High Range CHIRP. However, the unit can also scan at 50 kHz, and with a 50/200 kHz transducer, you can scan at Low CHIRP frequencies for a higher depth penetration. 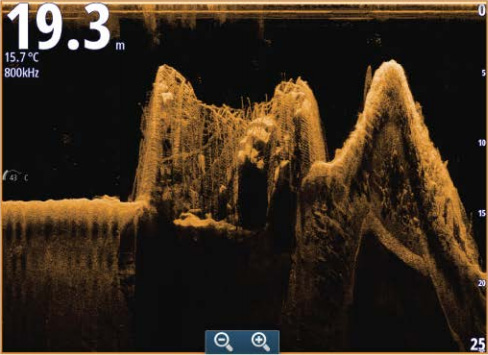 Overlay DownScan offers the possibility to blend the DownScan sonar with the 2D sonar. This can help you understand better the positioning of fish targets in relation to structure. Fish ID replaces the standard sonar fish arches with fish icons, showing the depth of each fish icon next to it. This is not a totally reliable sonar function, though, as some of the targets that receive a fish icon, are not actually fish. Differently put, when using Fish ID, the sonar will assign a fish icon to each suspended target.

Bottom Lock, as the term suggests, allows you to keep the sonar view close to the bottom, or at a certain range from the bottom, a feature that may be quite useful when looking for bottom feeders. A-Scope is a vertical flasher which appears next to the 2D sonar view. It indicates the real-time echo of the sonar or differently put, the information caught by the most recent sonar echo.

The included TotalScan transducer integrates a temperature sensor so the unit can show the temperature in the top water layer. It also has a Temperature Graph function which gives you the possibility to see the temperature changes from a spot to another. It’s a function that can be useful when looking for certain water currents.

When it comes to Sonar Recording, this Simrad fish finder unit allows you to save the recording into its internal memory or on a microSD card, in order to review later. If more than one channel was recorded in the selected echo file, you can select which channel to display.

The Simrad GO5 XSE integrates a highly accurate and fast 10 Hz GPS receiver, which can update your position ten times every second, making it ideal for fast-moving boats. The boat’s position on the map is tracked smoothly, in real-time, without jumping from point to point. Needless to say, the unit can show your current coordinates or the coordinates of a certain waypoint you mark and save. Also, via the GPS system, the unit can calculate the speed of your vessel.

This Simrad unit has waypoints, routes, and tracks functions. It can stock up to 10,000 waypoints offering a decent palette of icons for them. For routes, the system includes support for Navionics Autorouting and C-MAP Easy Routing. As for tracks, the unit is set to automatically track and draw the vessel’s movement on the chart panel. The recorded tracks can be saved and converted to routes, to re-use.

The GO5 XSE is one of the Simrad fish finders equipped with the Worldwide Basemaps. These charts don’t offer exceptional detail but do provide the necessary support for navigation and awareness on the water. On the other hand, the unit is a full-featured chartplotter and can support a wide range of cartography options, including C-MAP MAX-N, Navionics, Insight, and charts crafted with the Insight Genesis software.

The TripIntel feature is also important to mention here. It’s a function designed for power boaters, displaying key information needed to plan a safe journey. It also helps you make smart decisions regarding the fuel range overlaid on charts, gives you access to current and tide levels information, it shows a detailed history of your previous trips, including other safe routes you took, how the boat performed, etc.

Since it’s a GO5 model, this Simrad unit features a 5-inch diagonal display. It has a pixel resolution of 800 x 480, with an LCD WVGA color display. It integrates LED backlight (1200 nits), for an excellent view in direct sunlight, and features IPX7 standard waterproofing. As opposed to the Lowrance Elite-5 Ti, this unit does not have any keypad. All the commands are done via touchscreen just as for a tablet. It does have a very straightforward and highly customizable interface, which renders it really easy to use.

The Simrad GO5 XSE chartplotter and fish finder unit features an NMEA 2000 port and a microSD card reader with one card slot. This being said, the unit can connect to any other NMEA 2000 capable equipment on your vessel, including outboard and inboard engines, fuel level and flow meters, speed heading, temperature sensors, AIS units, etc. It gives you the possibility to create custom digital instrument displays, condensing a lot of information on the most crowded dash while keeping a clean look.

SonicHub®2 and Bluetooth® Audio Integration are also included features. Thus, the unit gives you the possibility to stream music from Bluetooth devices, play MP3 files from a USB flash drive, or listen to the SonicHub 2’s built-in AM/FM radio. It also has a built-in Wi-Fi module and provides direct access to GoFree cloud services, including map downloads, software updates etc.

The Simrad GO5 XSE 000-12675-001 is a fish finder and chartplotter combo which offers a wide array of navigation and sonar functions, including 2D CHIRP broadband sonar, StructureScan, ForwardScan, 10 Hz GPS and the Worldwide Basemaps. It comes with the TotalScan transducer which allows you to use DownScan, SideScan, High and Med CHIRP. It has mid-range depth capabilities, making it suitable for both freshwater and saltwater use. It offers excellent networking possibilities via NMEA 2000, also having a Wi-Fi module for GoFree connection and Bluetooth connectivity. In all, it’s a versatile unit, perfect for a wide range of boats.