The Garmin Striker Vivid 7cv is not too different from the Striker Vivid 5cv that we’ve already covered here. However, it offers a larger 7-inch display and has wireless connectivity. It’s one of the Garmin fish finders released at the end of 2020 and has the Vivid color palette which makes available 7 extra color modes for the ClearVü sonar. For reference, this is the Garmin part number 010-02552-00.

Just like the older Striker Plus 7cv, the Striker Vivid 7cv supports multiple sonar frequencies, including 50/77/200 kHz for its standard CHIRP mode, and 260/455/800 kHz for ClearVü. It also supports dual-frequency which means that if you pair it with a dual-beam transducer, you should be able to use both sonar beams simultaneously and view the sonar returns in split-screen. However, this Garmin fish finder does not support Panoptix sonar or SideVü structure scanning sonar. 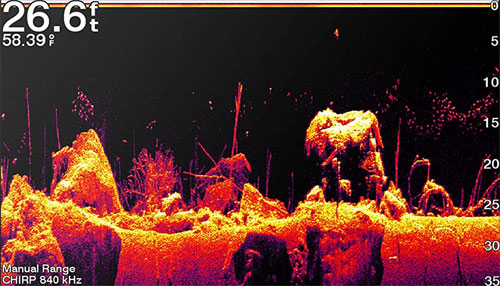 The unit comes with the classic GT20-TM transducer which supports both standard CHIRP and CHIRP ClearVü. It’s a plastic transducer with a transom mount, 20 ft. (6 m) of cable with a 4-pin connector. It also integrates a temperature sensor and the unit has a temperature graph function along with the basic temperature reading feature.

The GT20 transducer uses two conical beams for the CHIRP sonar. It uses the 77/200 kHz channels. The coverage of the beams is 45° for the 77 kHz mode, and 15° for the 200 kHz mode. The maximum depth capability that can be achieved with this transducer when using the standard CHIRP sonar is 1,900 ft. (579 m). 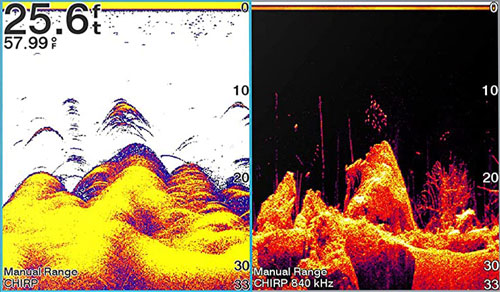 The unit offers multiple standard sonar functions. For example, it has a Circular Flasher mode for ice fishing, Fish Symbols, A-Scope, Bottom Lock, Split-Zoom, Auto Gain, multiple alarms, and more. However, it does not have Sonar Recording like the ECHOMAP models, only the Pause Sonar function.

The Garmin Striker units do not support maps such as LakeVü or BlueChart and the Striker Vivid 7cv is no exception. However, it does have a basic GPS plotter feature that offers the possibility to mark waypoints, view your current coordinates, record tracks, and create routes between multiple waypoints.

Although the unit does not support maps, it does have the Quickdraw Contours feature. This application uses the GPS and the 2D sonar for revealing and recording the depth contours of the lake that you’re scanning. This way, you can create your own bathymetric maps for your favorite fishing spots. The unit can actually store up to 2 million acres of maps with 1-foot depth contours. Plus, it has the Depth Range Shading feature which offers the possibility to create up to 10 depth ranges and color-code them for a quick view. 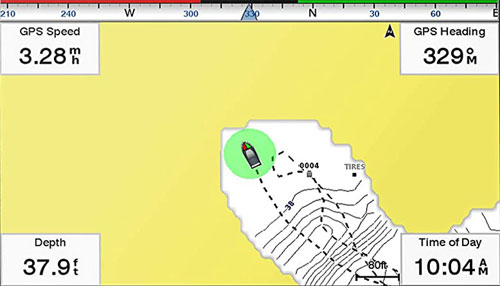 Since the unit has wireless connectivity, you can upload your maps to the Garmin Quickdraw Community to share them with other anglers or store them for later use. You can also download charts created with Quickdraw Contours from this database.

Similar to the other Striker models, the Vivid 7cv does not have networking features and only offers basic navigation. It does not support external GPS, AIS units, or VHF radio. It also does not support Radar or autopilot.

The Garmin Striker Vivid 7cv features a 7-inch, WVGA color display with a pixel resolution of 800H x 480V. It has LED backlight for improved readability in direct sunlight or at night. It is also IPX7 waterproof which essentially means that it can withstand spalshes, rain, or other incidental water exposure.

The unit has an easy-to-use interface. It does not have touchscreen technology so the navigation through its menus and the use of its applications is done exclusively via the keypad on the right. It offers the possibility to work with up to three applications in split-screen, and you can quickly access different combinations from the home screen.

The unit does not have networking features like Ethernet or NMEA. Therefore, you cannot connect it to an already existing boat grid. It also does not have a microSD card or SD card port. However, it has Wi-Fi connectivity. Therefore, you can sync it with your smartphone via the ActiveCaptain app. This app allows you to transfer waypoints, download and install software updates, download or upload maps from and to the Garmin Quickdraw Community, and even receive notifications from your phone on the display of your fish finder.

The unit comes with the standard tilt-swivel mount. The box does not include a unit cover.

The Garmin Striker Vivid 7cv is a fish finder with a GPS plotter and the Quickdraw Contours feature. It includes the GT20 dual-beam transducer for standard CHIRP and ClearVü. It does not have networking features like Ethernet or NMEA, but does have Wi-Fi which allows you to use the Quickdraw Community as well as backup waypoints, or download software updates. It is one of the most affordable 7-inch fish finders with structure scanning and GPS at the moment, great for a wide range of boats, for inland and blue water fishing.