The Striker Plus 4 Ice Bundle is one of the Garmin ice fish finders available since 2020. It includes the Striker Plus 4 head unit, the newer Dual Beam IF ice transducer, and the standard ice fishing kit. For reference, this is the Garmin part number 010-01870-30.

The Garmin Striker Plus 4 head unit offers standard CHIRP sonar. It does not support DownVü or SideVü 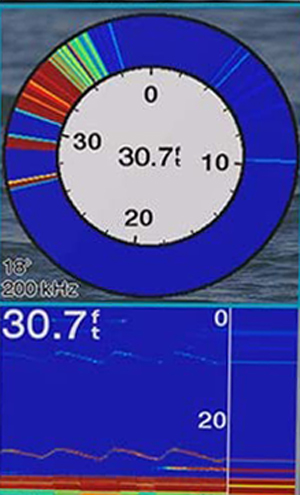 technology. It also does not support Panoptix sonar or Panoptix transducers. It supports multiple frequencies, including 50/77/83/200 kHz. However, the included transducer can only work with two of these channels, the 77 kHz and the 200 kHz.

This Garmin ice fishing bundle comes with the Dual Beam IF transducer, part number 010-13069-00. This is a pretty standard conical ice transducer featuring 8 ft. (2.4 m) of cable with a 4-pin connector. The cable is silicone-coated in order to remain flexible even during the coldest temperature. A foam float for stabilizing the transducer is also included. It’s also important to mention here, that the transducer does not have an internal temperature sensor. However, the unit can show water temperature if paired with a different transducer that is temperature-capable.

The unit itself offers quite a few useful fish finding features. To begin with, it has the Circular Flasher mode for ice fishing. This puts the sonar data into a circular depth scale with the depth in the middle, and the bottom, vegetation, fish, structure, and your jig displayed on the colored segments on the outer ring.

The ice flasher mode can be viewed in split-screen with the regular sonar view which is a plus. Also, on the list of standard sonar features, the unit also has Fish Symbols, A-Scope, Bottom Lock, Fish Alarm, Depth Alarm, and more. The unit does not have Sonar Recording, though.

Although it’s one of the smallest and most basic Garmin fish finders, the Striker Plus 4 unit does offer basic 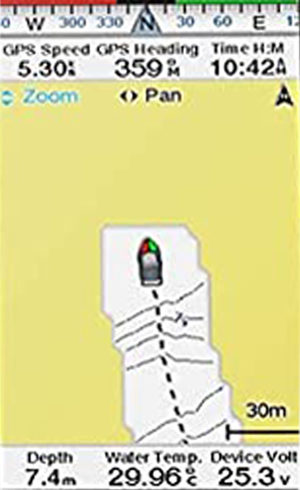 navigation features. To begin with, it has a standard GPS plotter that can show your current location and offers the possibility to mark waypoints for your favorite fishing spots. All the data is shown on a blank background; the unit does not support charts such as the BlueChart g3 or LakeVü g3.

However, even though this fish finder unit does not support charts, it does have the Quickdraw Contours feature. This is a bathymetric mapping application that uses the GPS function and the standard sonar function in order to reveal and record the depth contours of your lake. Needless to say, it’s best used when the unit is mounted on a boat with a transom transducer. But nonetheless, you can still create a custom bathymetric map for your favorite fishing spots by running this application in multiple water holes.

The Garmin Striker Plus 4 control head features a 4.3″ diagonal color display, with a pixel resolution of 480H x 272V, and LED backlight. It does not have a jig charging mode like the Humminbird ICE HELIX 5 CHIRP G3. It is keypad-operated (does not have touchscreen technology). It has 6 buttons, including On/Off, Backpage, Cursor, Menu, Enter, and Waypoint Creation. It is IPX7 waterproof which means it can withstand incidental water exposure.

Since it’s one of the most basic Garmin units, the Striker Plus 4 does not have networking features (no NMEA, no Ethernet ports). It also does not have wireless connectivity or a microSD card slot. Therefore, you cannot download or share maps created with the Quickdraw Contours feature.

Last but not least, the included portable kit includes the carrying bag which is made from a pretty sturdy synthetic fabric featuring a handle and two side pockets. A 12V rechargeable battery and a charger for it are included. The battery can last for up to several days, depending on temperature. Also, this fishing kit includes a tilt-swivel mount for the unit.

The Garmin Striker Plus 4 Ice Fishing Bundle includes the Striker Plus 4 head unit, the Dual Beam-IF transducer, and the portable kit with the carrying bag, battery, charger, and mount for the unit. The head unit offers standard CHIRP sonar, and the transducer can scan depths up to 1,900 ft. The unit can also be used on a boat if paired with a transom transducer. In all, it’s a pretty complete ice fishing kit, and also one of the most affordable at the moment.