The Striker Cast GPS is one of the Garmin fish finders released in 2020. It’s a similar model to the Deeper Pro+ that we’ve already covered here. It does not have a head unit like the other Striker models. It pairs with an app and you’ll have to use your smartphone or tablet as a display unit for it. For reference, this is the Garmin part number 010-02246-02. 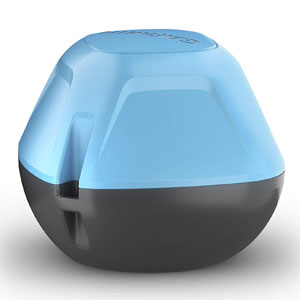 The Striker Cast GPS has an internal battery that offers an autonomy of approx. 10 hours. The box does not come with a charger, but you do get a USB cable which you can attach to a charger, laptop, or PC in order to charge your unit. The box also includes a carrying bag which is made of durable synthetic material.

As we’ve mentioned above, this Garmin fish finder uses your phone as a display unit. So, in order to 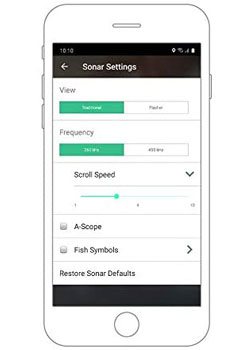 sync it with your phone, you have to download and install the Garmin Striker Cast App which is available from the Apple App Store or Google Play.

Once the app is installed and a connection is established between your phone and your Striker Cast GPS unit, you can view the sonar return on your phone and also use the Quickdraw Contours feature for navigation.

The Striker Cast unit connects to your phone via Bluetooth. Its connectivity range is 200 ft. (61 m). Therefore, as long as your phone is within this range, you should be able to see the sonar imaging and the GPS data.

An important aspect that we must mention here, is that the app does not have a split-view feature. Therefore, you can only view and use one function at a time, either the sonar or the Quickdraw Contours. However, the app is upgradable, so this feature may be added in future patches.

The Garmin Striker Cast GPS offers a standard dual beam sonar. Its operating frequencies are 260/455 kHz. The unit does not have CHIRP technology and despite the fact that the supported frequencies are similar to the ones used by ClearVü sonar available with the other Striker or ECHOMAP units, this fish finder does not support ClearVü.

The Garmin Striker Cast app offers several standard sonar functions. Among them, we can count A-Scope, Fish Symbol ID, AutoGain, Circular Flasher, and more. The Fish Symbol ID assigns fish icons to the suspended targets (interpreted as fish) also displaying the depth of each target. AutoGain offers the possibility to filter out all clutter and small targets in order to focus on the bigger targets. The A-Scope feature is a vertical flasher that indicates the most recent data caught by the transducer beam.

The Circular Flasher feature can be quite useful for ice fishing or down dropping, as it shows the movement of your lure in real-time and the movement of the fish. It puts the sonar data into a circular depth scale indicating depth and water temperature. The default color scheme follows a traditional sonar color palette, in which yellow indicates the strongest return, orange indicates a strong return, red indicates a weaker return, blue indicates the weakest return, and white indicates no return. 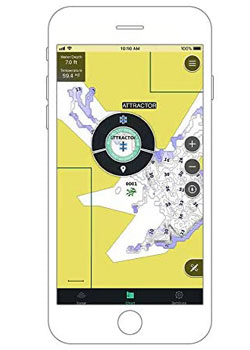 uses its data with the Quickdraw Contours mapping feature. This being said, you can craft your own bathymetric maps with 1-foot contours. The app also connects to the Garmin Quickdraw Community, so you can download maps created with Quickdraw Contours from there, for free. You can also upload your own Quickdraw maps to this database in order to share them with other anglers or back them up for later use.

The app does not offer the possibility to create routes or record tracks (at least not for now). However, you can still create waypoints so you can mark the best fishing spots on your custom maps. A Depth Range Shading feature is also available. Thus, you can color code the existing depths so you can view them at a glance.

The Striker Cast App cannot work with other maps from Garmin, such as LakeVü or BlueChart, so, technically the Striker Cast fish finder does not support maps. But on the other hand, Navionics maps can be used with most smartphones.

The Garmin Striker Cast GPS is a castable fish finder that uses your smartphone as the display unit. It offers 2D standard sonar, Circular Flasher, AutoGain, Fish Symbols, as well as basic navigation features as GPS and Quickdraw Contours. It’s a highly portable and versatile device, can be used year-round, from a boat, from the shore, from a bridge, and on ice.