The Garmin Striker 7sv is one of the first Striker series fish finders from Garmin. Although it was discontinued a while ago, it may be available at certain retailers. It’s a fish finder and chart plotter that offers SideVü, DownVü, and 2D CHIRP sonar, as well as a basic GPS plotter function. For reference, this is the Garmin part number 010-01554-00. Also, one of the newer versions for it is the Garmin Striker Plus 7sv.

First of all, the Striker 7SV unit is capable of 50/77/200 kHz for traditional sonar, and 260/455/800 kHz for DownVü and SideVü. But enforced by CHIRP technology, and powered by the supplied CHIRP GT52HW-TM transducer, you will gain much more from this unit. For example, for DownVü / SideVü instead of using just the 455 kHz or 800 kHz frequency for a continuous pulse, it will modulate each pulse between 425-485 kHz, and respectively 790-850 kHz, with the help of the transducer which also incorporates CHIRP elements. This way, a much clearer view will form on the screen, eliminating all clutter, and contouring the targets much better. 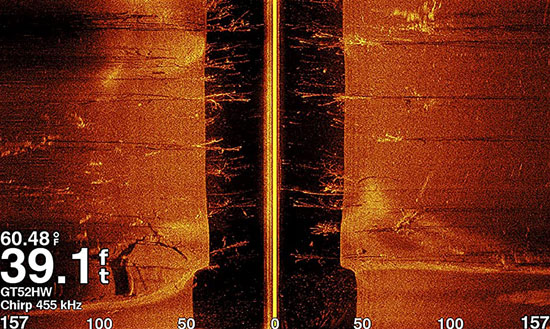 Both CHIRP SideVü and CHIRP DownVü are great sonar technologies for observing structure. However, fish targets or bait clouds will also appear on the screen. SideVü will help you understand the position of a certain target in relation to the boat, or in relation to other targets. It has a range of up to 750 ft (228 m) on each side of the boat. DownVü will help you understand a target’s shape better, and also clearly see how far up in the water column it reaches.

For SideVü / DownVü, the transducer will use thin beams, of up to 2° fore to aft, but 50° wide for 455 kHz, and 30° for 800 kHz. Evidently, SideVü will use two beams for each frequency, one on each side of the boat, while DownVü will “look” directly under the boat.

When it comes to traditional sonar, with the supplied GT52HW-TM transducer, the Striker 7SV will only use one beam, for High Wide CHIRP, modulating each pulse between 150-240 kHz. The transducer beam is conical, and the beam will vary between 24° and 16°. However, the unit can support dual frequency, and work with a 77/200 kHz transducer, or with a 50/200 kHz transducer. 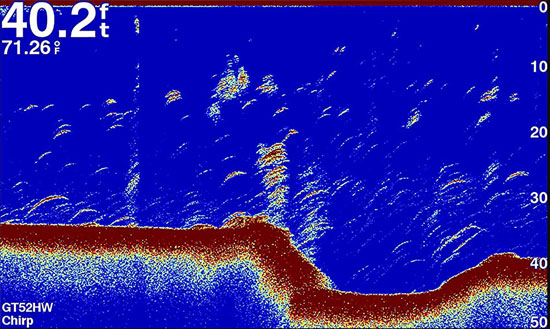 Now, since 2D sonar is much better at observing targets, this sonar technology will help a lot to distinguish between targets in a fish school, get a better idea of their size, and even help you tell whether you’re looking at a school of crappie, or a school of white bass.

Although the maximum depth you can reach with this unit is approx. 2,300 ft for freshwater, and 1,100 ft for saltwater, this can only be achieved with a 50 kHz capable transducer. With the supplied transducer, the maximum depth that you will be able to scan is 800 ft for 2D and up to 500 ft with SV and DV.

One last aspect to mention here also regards the transducer. The GT52HW-TM supplied with the unit has a 12-pin connector, while the unit has a 4-pin connector. However, a cable adapter is included. The transducer comes with both transom and trolling motor mounts, and 20 ft. (6 m) of cable. It also incorporates a temperature sensor, thus the unit will be able to read the topwater temperature. The control unit also has the temperature graph function, which indicates temperature variance over the scanned area.

Although this Striker unit focuses on offering some of the best sonar technologies available, it also has a basic GPS system. It doesn’t have a chartplotter, but nonetheless, it lets you know your current coordinates, and track the speed of your boat. The best part regarding this function is that it allows you to mark waypoints, offering a selection of various, suggestive icons. It can store up to 5,000 waypoints. Also, you can transfer waypoints between this unit and echoMAP units via data cable.

The control unit features a 7-inch display, just about wide enough to offer great detail for side imaging, and also to supply enough screen space for a 3-panel, split-screen view. The display has an 800 x 480 pixel matrix, just like the Striker 5DV, a WVGA colorful screen, with LED adjustable backlight. Its backlight makes the view bright and clear enough even in direct sunlight. It’s also a polarized sunglasses-friendly unit.

Just like the other Striker units, the 7SV features a more compact and rugged design, more suitable for outdoor use. It’s also IPX7 waterproof, which means rain or splashes won’t harm it. But nonetheless, the box also includes a cover.

Finally, this unit supports Minn Kota and MotorGuide trolling motors with integrated transducers, and there’s also the option of a portable kit, which makes it easier to dismount or use for ice fishing or kayak. However, the box comes with the tilt, standard mount.

Most 7-inch fish finders with side view and down view sonar that you’ll find out there, also include a whole bunch of features that you may not want, such as advanced GPS and chartplotter functions, sonar recording, or SD card reader. The Striker 7SV cuts back on all these features, in order to provide the best sonar available, including CHIRP technology for 2D, SideVü, and DownVü, at an extremely affordable price. In other words, it’s a unit with minimal navigation and connectivity features and functions but does offer some kick-ass sonar. The transducer is also included so you won’t have to pay extra for it. It is actually one of the most affordable, if not the most affordable 7-inch unit with SideVü that you can find at the moment.