The Panoptix LiveScope UHD 93sv Ice Bundle is one of the ice fish finders available from Garmin since 2020. As opposed to the ECHOMAP UHD 73cv Panoptix Ice Bundle that we’ve already covered here, this model comes with the Panoptix LiveScope System and includes the ECHOMAP UHD 93sv unit. For reference, this is the Garmin fish finder part number 010-02342-15.

The Garmin 010-02342-15 ice bundle comes with the Panoptix LiveScope System which includes the LiveScope GLS 10 sonar black box and the Panoptix LVS32 transducer. The sonar system provided by the black box covers a frequency range between 530 kHz and 1,100 kHz. However, the unit itself covers a wide array of frequencies as well. For example, it supports 50/77/200 kHz for standard CHIRP and 260/455/800/1000 kHz for ClearVü and SideVü, so you can pair it with a variety of other transducers from Garmin if you want to install it on a boat.

The included Panoptix LVS32 transducer comes with the swivel pole mount. It casts an oval beam with a coverage of 135° x 20° which has a range of 200 ft. (61 m). The Panoptix LiveScope System offers the possibility to cast this beam either down or sideways. In other words, this sonar system offers LiveScope Down sonar and LiveScope Forward sonar. The LiveScope Forward is extremely useful as it eliminates the need to drill multiple ice holes looking for fish. You only need to drill one hole, drop the transducer in the water, set it to the forward mode, scan a radius up to 200 ft. (61 m) around that hole, and easily locate the biggest clusters of fish.

Needless to say, the Panoptix LiveScope sonar displays the activity below the ice in real-time, showing moving sonar images. Therefore, you can see the movement of your jig, as well as fish movement responding to your jig.

The unit itself offers a wide array of standard sonar features and functions as well. To begin with, it has standard Circular Flasher mode so you can pair the unit with a classic Garmin ice transducer such as the GT10HN-IF. It also has A-Scope, Fish Symbols, Bottom Lock, Sonar Recording, Sonar Rewind, various alarms, and more.

Although this Garmin Panoptix LiveScope bundle is intended for ice fishing, the included ECHOMAP UHD 93sv unit offers a pretty decent range of navigation features. To begin with, it has a 5 Hz internal GPS receiver and supports WAAS, MSAS, and EGNOS for position augmentation. It also offers the possibility to save waypoints, routes, and record tracks. You can save up to 5,000 waypoints in its memory, 100 routes, and 50 tracks. Each track can have up to 50,000 points and can be converted into a route later-on, to which you can add waypoints.

The unit is pre-loaded with the LakeVü g3 charts. This chart platform is improved with Navionics data. It covers more than 18,000 lakes, reservoirs, and rivers and makes available features such as Depth Range Shading and Auto Guidance.

The unit also supports the premium Garmin chart versions, LakeVü g3 Ultra, and BlueChart g3 Vision. Plus, it has the Quickdraw Contours application which gives you the possibility to create your own bathymetric fishing charts.

The unit does not support radar, but supports AIS data, DSC data, and is ActiveCaptain compatible. It also has the SailAssist page that offers laylines, enhanced wind rose, heading and course-over-ground lines, time to burn before the start, and the race times. 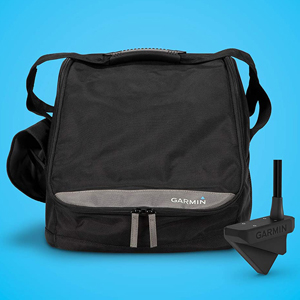 9-inch display WVGA color with a pixel resolution of 800H x 480V, and super-bright LED light. It combines touchscreen technology but also has a keypad on the right side. Its interface is very easy to use; it offers the possibility to create custom shortcuts and view up to four applications in split-screen.

The unit also has built-in WiFi and is compatible with the ActiveCaptain app. Via this app and a WiFi connection, you can easily upgrade the unit’s software, download charts, or upload your own charts created with the Quickdraw Contours feature to the Quickdraw Community. You can also pre-plan your fishing trip and even get notification messages from your smartphone. Plus, the unit has a microSD card slot for charts, data backup, and data transfer.

The unit is IPX7 waterproof which essentially means that it can withstand incidental water exposure. It comes with the portable ice fishing kit. This consists of a carrying bag made from a durable synthetic material featuring a carrying handle, a lead-acid 12V battery, and a charger for the battery. A tilt and swivel mount and the Panoptix ice fishing mount for the transducer are also included.

The Garmin Panoptix LiveScope UHD 93sv Ice Bundle includes the Panoptix LiveScope System, the ECHOMAP UHD 93sv head unit, and the portable ice fishing kit (bag, battery, charger). The unit also supports standard CHIRP sonar, UHD SideVü, and UHD ClearVü, it has built-in GPS, LakeVü g3 charts, and wireless connectivity. Although it’s a fish finder intended for ice fishing, it’s a versatile fishing tool that can be used year-round either from a boat or a dock with a wide variety of other transducers.