The GPSMAP 743xsv part number 010-02365-03 is one of the Garmin fish finder and chartplotter combos release at the beginning of 2021. Although it does not come with a transducer, it packs an impressive range of sonar and navigation features and offers superior networking possibilities. It also has a richer pixel matrix than the ECHOMAP UHD 73sv and ECHOMAP UHD 93sv units, so it provides considerably sharper images.

The unit also has the new Vivid color palettes for the ClearVü and SideVü sonar, similar to the Striker Vivid 7cv, for example. These new color modes offer extra possibilities for examining the underwater environment. They can be quite efficient in distinguishing fish from structure or vegetation, depending on the lake or body of water where you’re fishing.

As we’ve mentioned above, the GPSMAP 743xsv does not include a transducer. However, it supports just about any transducer from Garmin, from the classic GT20 for standard CHIRP and ClearVü, to the new GT56UHD and Panoptix PS21, PS22, PS30, etc.

In terms of standard sonar features and applications, the Garmin GPSMAP 742xs Plus offers the full range. The list includes A-Scope, Bottom Lock, Fish Symbols, Depth Line, Surface Noise, Depth Alarm, Fish Alarm, Sonar Recording, and more. It does not seem to have a Circular Flasher mode for ice fishing, but if paired with a Panoptix LiveVü with Ice Fishing Mount, it should offer considerably better scanning possibilities.

To begin with, the GPSMAP 743xsv has a 10 Hz internal GPS receiver. This means it can provide position updates 10 times per second. It supports GLONASS, WAAS, EGNOS, and Galileo data for position augmentation. Similar to the ECHOMAP UHD units, it can store up to 5,000 waypoints in its memory, 100 routes, and 50 tracks. Each track can 50,000 points and can be converted to a route later on, to which you can add waypoints.

The unit is pre-loaded with both Garmin LakeVü g3 and BlueChart g3. The LakeVü charts offer coverage for the U.S. inland waters and cover more than 17,000 lakes, reservoirs, and rivers with 1-foot depth contours. The BlueChart g3 charts offer coastal coverage for the West Coast, the East Coast, the Gulf of Mexico, and the Canadian side of the Great Lakes. Both chart platforms are enhanced with Navionics data. They also offer features such as Depth Range Shading, Auto Guidance, and more. Of course, the unit also supports the premium versions of these charts, the LakeVü g3 Ultra and BlueChart g3 Vision. However, it does not support Navionics charts such as Navionics+ or Navionics Platinum+. 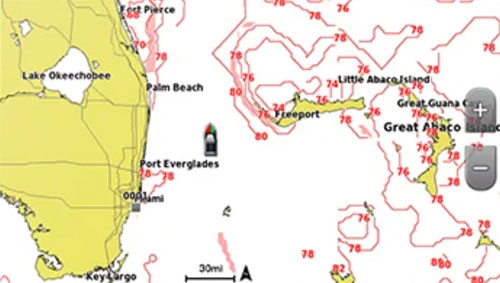 The Quickdraw Contours feature is available with this Garmin unit as well. This is an application for bathymetric mapping. It allows you to scan and record the depth contours of your lake, and based on that, you can craft your own fishing maps. Plus, you can share your maps with other anglers via the Garmin Quickdraw Community as well as download Quickdraw Contours charts for free from this user-supported chart database.

One of the big pluses of the GPSMAP 743xsv in terms of navigation is its Radar support. The unit already has a Radar application built-in and is compatible with Radar modules from Garmin such as the 4 kW GMR 18 HD+.

The unit’s list of navigation features does not end here. It also supports VHF, AIS, and Fusion-Link audio systems. It has J1939 connectivity so you can pair your GPSMAP chartplotter with various types of engines for a detailed engine data view. The OneHelm feature is also available; this brings together all the operations and capabilities of third-party devices such as EmpirBus digital switching on one screen. And finally, it has ANT technology and you can pair it with different other devices such as gWind transducers, GNX Wind marine instruments, as well as wireless remote controls.

The GPSMAP 743xsv features a 7-inch XSVGA color display with a rich pixel matrix of 1024H x 600V, and LED backlight for improved readability in direct sunlight or at night. It also offers polarized support so you won’t have difficulties viewing the display when wearing polarized sunglasses.

The unit doesn’t have a keypad; it is touchscreen operated. Its interface is highly intuitive and easy to use. You can customize its homepage with the most used application combos for quick access as well as work with multiple applications in split-screen.

The unit offers quite an impressive range of networking features. To begin with, it has an NMEA 2000 port and supports NMEA 0183 as well. An Ethernet port is also available. So, these being said, you can easily plug it into an already existing boat grid so it can communicate with other boating instruments. There’s also a J1939 port for direct connection to various engines including Yamaha engines. Plus, the unit has a USB port and a dual microSD card slot.

The unit’s transducer port is a 12-pin one. Thus, if you’re going to use a transducer with a different number of pins, you will need a cable adapter. An 8-pin to 12-pin cable adapter is actually included.

Wireless connectivity is available with this unit as well. The built-in WiFi connectivity offers you the possibility to sync your smartphone or tablet with the GPSMAP chartplotter via the ActiveCaptain app for smart notifications, software updates, chart downloads, data uploads and backups, trip planning, and more.

Finally, the unit includes a bail mounting kit and a flush mounting kit. A protective cover is also included.

The Garmin GPSMAP 743xsv is a multi-function fish finder and chartplotter unit offering CHIRP sonar, ClearVü, SideVü, and Panoptix sonar support. It has a 10 Hz internal GPS receiver and is pre-loaded with the LakeVü g3 and BlueChart g3 charts. It supports Radar and multiple other boating instruments. It also offers an extensive range of networking features including Ethernet, NMEA 2000, wireless connectivity, J1939 support, and more. It’s a versatile unit, great for a wide array of boats, for both off-shore and inland fishing and navigation.