The Garmin ECHOMAP Ultra 122sv 010-02528-01 is a newer version of the 122sv 010-02113-01 that we’ve already covered here. However, this newer model comes with the GT65UHD transducer, and also has the new Vivid color palette for the structure scanning sonar.

The ECHOMAP Ultra 122sv 010-02528-01 supports all sonar technologies provided by Garmin. It has built-in CHIRP sonar, ClearVü, and SideVü. It is also compatible with the Panoptix live sonar transducers and supports Panoptix sonar. 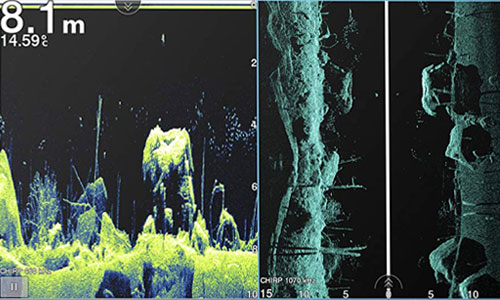 The GT56UHD transducer comes with a transom mount. It has 25 ft. (7.6 m) of cable with a 12-pin connector and an internal temperature sensor. A trolling mount is not included for it.

The transducer casts a conical beam with a variable coverage of 24°-16° for the standard CHIRP sonar. Its depth capability is 800 ft. (244 m). Also, the CHIRP frequency range for this sonar mode is 150-240 kHz.

Needless to say, the unit makes available the full range of standard sonar features and functions. The list includes Fish Symbols, Amplitude Scope, Bottom Lock, Circular Flasher, Noise Rejection, various alarms, Sonar Recording, Sonar Rewind, and more. A Temperature Graph function is also available. Plus, as we’ve mentioned above, the unit has the vivid color palette for Sv and Cv. This feature offers various color combinations for the structure scanning sonar with superior contrast which can be very useful when looking for fish.

This Garmin fish finder is also a chartplotter. It offers a wide array of navigation features. To begin with, it has a built-in 10 Hz GPS receiver which can provide position updates 10 times per second. It also supports WAAS, EGNOS, and MSAS for position augmentation. Plus, the unit has waypoint creation, route creation, and track plotting functions. You can save up to 5,000 waypoints in its memory, 100 routes, and up to 50 tracks. Each track can have 50,000 points. 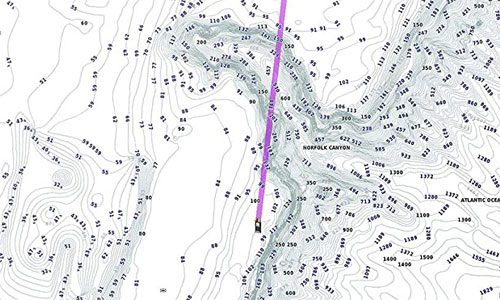 In terms of charts, the ECHOMAP Ultra 122sv only has the Worldwide Basemap. These charts only offer basic detail. But nonetheless, the unit supports LakeVü g3, LakeVü g3 Ultra, BlueChart g3, or BlueChart g3 Vision. Thus, you can always upgrade its internal chart base. However, it’s important to mention here that the unit does not support Navionics chart cards.

Regardless of the charts that you’re going to use, the unit has its own bathymetric mapping application – Quickdraw Contours. This uses the standard sonar data and GPS data to reveal and record the depth contours of the lake or reservoir that you’re scanning. Therefore, you can always craft your own fishing charts, no matter where you fish. Plus, the unit has wireless connectivity and you can always download already made charts from the Garmin Quickdraw Community, as well as share the one you’ve made with other anglers.

The ECHOMAP Ultra 122sv does not support radar like the GPSMAP 943xsv. However, it does support AIS units, can display position data from DSC-capable VHF radio. It also supports FUSION-Link™ compatible radios. Plus, it offers a wide array of gauges and graphs for information with regards to your engine, fuel, trips, wind, tides, and currents, and more.

The Garmin ECHOMAP Ultra 122sv 010-02528-01 features a keypad-assisted interface. It responds to any touchscreen command just like a tablet, but also has a minimalistic keypad on the right side. Its interface is highly intuitive and easy to use. Its homepage is customizable; you can add the most used app combinations to it for quick access. Also, you can work with up to four applications in split-screen format.

The unit is equipped with a WXGA IPS color display, 12.1″ in diagonal, and a pixel resolution of 1280 x 800. It has integrated backlight and provides polarized support. It is also IPX7 waterproof, which essentially means it should withstand incidental water exposure and rain with no problem.

The ECHOMAP Ultra 122sv 010-02528-01 offers a fairly decent range of networking features as well. It has NMEA 0183 input and output ports (1 each), 2 Garmin Marine Network™ ports for large connectors, and also supports NMEA 2000. This being said, you can share data between various Garmin units, or enable your unit to communicate with different other instruments such as AIS units, VHF radios, FUSION-Link compatible radios, external GPS sensors, and more. However, it does not support Radar.

Bluetooth and WiFi connectivity is also available with this Garmin fish finder. This being said, you can connect your unit to a WiFi hotspot for data download and upload via the ActiveCaptain app, or you can sync it with your smartphone via Bluetooth and get notifications from your phone on your Garmin unit. Plus, it also has two microSD card slots which you can load either with BlueChart or LakeVü maps, or with blank cards for data backup or data transfer.

Last but not least, the box includes the classic quick-release mount for the unit. A flush mount and a unit cover are also included.

The Garmin ECHOMAP Ultra 122sv 010-02528-01 is a fish finder and chartplotter featuring standard CHIRP sonar, ClearVü, and SideVü. It has a 10 Hz internal GPS, it is pre-loaded with the Garmin Worldwide Basemap, and also has the Quickdraw Contours feature. It includes the GT56UHD-TM transducer and can also be paired with any of the Panoptix transducers. In all, it’s a great unit for a wide range of boats, for both in-land and off-shore fishing.