The ECHOMAP UHD 92sv is one of the Garmin fish finders released at the end of 2019. It’s similar to the ECHOMAP UHD 93sv that we’ve already covered here, but comes with the Worldwide Basemap instead of the LakeVü charts. For reference, this is the Garmin part number 010-02341-01.

The Garmin ECHOMAP UHD 92sv offers the possibility to use three types of sonar with the included transducer. It has built-in standard CHIRP sonar, ClearVü, and SideVü. It also supports Panoptix sonar if paired with one of the Garmin Panoptix transducers. The unit supports 50/77/200 kHz for standard CHIRP, 260/455/800 kHz for ClearVü and SideVü, and of course, the 1100 kHz for UHD SideVü.

The included transducer is the GT54UHD-TM. It’s a plastic transducer with a transom mount, 20 ft. (6 m) of cable, and a 12-pin connector. It also integrates a temperature sensor and the unit has a Temperature Graph function. 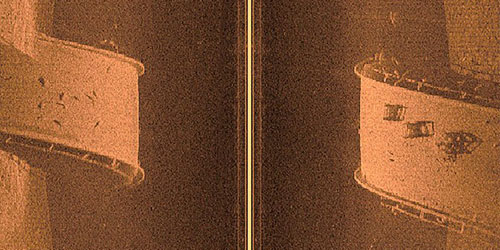 For the standard CHIRP sonar, the GT54UHD-TM transducer is also capable of only one beam in a CHIRP frequency range of 150-240 kHz and with a coverage of 24°-16°. In other words, with the included transducer, this Garmin fish finder can only use High CHIRP. Its depth capability is 800 ft. (244 m). However, if you equip your unit with a 50 kHz capable transducer, you should be able to use the Low CHIRP mode for deepwater scanning.

The Quickdraw Contours feature is also available with this Garmin fish finder. This is a depth contour recording application that gives you the possibility to create your own custom fishing maps. It uses the 2D sonar data and the GPS data to reveal and record the depth contours of the lake that you are scanning. So, if your favorite lake is not covered by the included charts, you can map it yourself. Also, the unit offers the possibility to access the Garmin Quickdraw Community where you can upload your created charts to share them with other anglers, or download other maps made with Quickdraw Contours.

The unit is equipped with a 5 Hz internal GPS receiver. This means it can provide position updates 5 times per second. It supports GLONASS, EGNOS, and WAAS data for position augmentation. It also has a GPS speed function, track recording, waypoint creation, and route creation. You can save up to 5,000 waypoints in its memory, up to 100 routes, and up to 50 tracks.

Similar to the other units of the ECHOMAP series, the Garmin ECHOMAP UHD 92sv does not support Radar but does support AIS data, VHF radio, and has the sailing feature page. The sail assist features include laylines, enhanced wind rose, heading and course-over-ground lines, time to burn before the start, and the race times.

The ECHOMAP UHD 92sv features a 9″ display with a pixel resolution of 800H x 400V, with LED backlight for improved readability in direct sunlight. The display is LCD-type, WVGA color. Also, the unit is IPX7 waterproof which essentially means that it can support incidental water exposure (splashes or rain) without sustaining water damage.

As opposed to the 62cv unit, this one has cross-touch technology. In other words, it can be operated via touchscreen or by using the keypad on the right side of the display. It has a user-friendly interface, its homepage can easily be customized with the most used app combinations. It also offers multiple split-screen possibilities.

The unit supports both NMEA 0183 and NMEA 2000. Thus, you can connect it to an existing boat grid so that it can communicate with other boat instruments or other fish finders. It also has built-in WiFi; therefore, you can sync it with your smartphone via the ActiveCaptain app for different data sharing. For example, the ActiveCaptain app gives you the possibility to plan a fishing trip then transfer the data to your chartplotter. Also, due to the WiFi connection, you can view notifications from your phone on the display of your chartplotter.

As we’ve mentioned above, the unit features a microSD card slot that you can load with various map cards from Garmin. However, it’s important to mention that the unit does not support maps from Navionics or C-MAP.

Last but not least, the unit comes with the classic quick-release mount. The box also includes a flush mount and a unit cover.

The Garmin ECHOMAP UHD 92sv is a fish finder and chartplotter offering UHD SideVü, UHD ClearVü, and High-Wide CHIRP sonar, the Worldwide Basemap platform, and a 5 Hz internal GPS. It includes the GT54UHD transducer which supports both UHD ClearVü, UHD SideVü, and high-wide CHIRP standard sonar. The unit also offers a wide array of other features such as wireless connectivity, Quickdraw Contours, superior networking, and supports Panoptix transducers. It’s a versatile unit, great for a wide array of boats, for inland or offshore fishing and navigation.