The ECHOMAP UHD 65cv is one of the Garmin fish finders released in 2020. It’s similar in terms of features to the ECHOMAP UHD 63cv but is pre-loaded with the Canada LakeVü charts, not the ones for the US. For reference, this is the Garmin part number 010-02332-00.

First of all, the Garmin ECHOMAP UHD 65cv offers two types of sonar technologies, these being traditional CHIRP and ClearVü. For traditional CHIRP it supports the 50/77/200 kHz base frequencies, while for the ClearVü sonar it supports 260/455/800 kHz. Of course, since it’s one of the newer UHD series units, it also has the UHD ClearVü sonar mode. It’s important to mention, though, that the unit does not support SideVü sonar and Panoptix sonar. 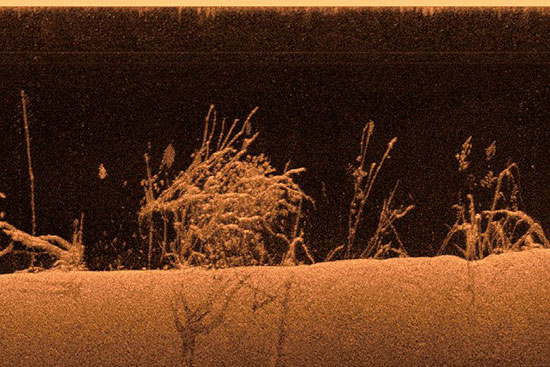 Similar to the other UHD ClearVü units, the ECHOMAP UHD 65cv includes the GT24UHD-TM transducer. This is a plastic transducer with a transom mount. It has a built-in temperature sensor, 20 ft. (6 m) of cable, and a 4-pin connector.

The GT24UHD-TM transducer supports only two frequencies. For the 2D traditional CHIRP sonar, it uses a 150-240 kHz High CHIRP range and a conical beam with a variable coverage of 24°-16°. The maximum depth capability of the High Wide CHIRP beam 800 ft. (244 m).

For ClearVü, the transducer uses an oval beam in a CHIRP frequency range of 760-880 kHz. The beam’s coverage is 0.94° x 60° and its depth capability is 200 ft. (61 m). Evidently, since this Garmin fish finder system offers the possibility to use a UHD mode for ClearVü, the imaging clarity is superior to the older ECHOMAP Plus 65cv.

As we’ve mentioned above, the Garmin ECHOMAP UHD 65cv is equipped with the Canada LakeVü g3 charts. Similar to the other Garmin g3 charts, this chart base features integrated Garmin and Navionics content. It covers more than 13,500 lakes from which 4,800 have 1-foot contours. Auto Guidance, Depth Range Shading, Shallow Water Shading and other features are available with these charts as well.

The unit also supports all the other types of charts from Garmin. The list includes US LakeVü g3, BlueChart g3, LakeVü Ultra, and BlueChart g3 Vision. However, it’s important to mention that the unit does not support charts from Navionics (such as Navionics+ or Navionics Platinum+) or from C-MAP.

The Garmin ECHOMAP UHD 65cv also has the Quickdraw Contours feature. This is an application for creating custom bathymetric maps. It uses the standard sonar data and the GPS data to reveal and draw the depth contours of the lake that you’re scanning on the map. This way, you can create your own fishing charts with the most up to date contours. Plus, you can share them with the Garmin Quickdraw Community or you can download already made maps from there via the ActiveCaptain app.

Needless to say, the unit has built-in GPS. It’s a 5 Hz GPS receiver which means it can provide position updates 5 times per second. It also supports GLONASS, WAAS, EGNOS, and Galileo data for position augmentation. A GPS speed function is also available.

The SailAssist page is also available with this Garmin unit. The sail assist features include laylines, enhanced wind rose, heading and course-over-ground lines, time to burn before the start, and the race times. Also, the unit supports AIS data, DSC data, and is ActiveCaptain compatible. However, it does not support Radar.

The Garmin ECHOMAP UHD 65cv unit features a 6.2″ LCD display with a pixel resolution of 800H x 480V, and LED backlight for improved readability in direct sunlight. It is also IPX7 waterproof which basically means it is designed to withstand splashes and incidental water exposure.

The unit has an intuitive and easy to use interface. It has touchscreen technology but also has the side keypad. Its interface is highly customizable; you can pair the applications that you use the most and pin them to its homepage for quick access. The unit also offers the possibility to work with up to four applications simultaneously in split-screen format.

In terms of networking, this Garmin unit has NMEA 0183 ports and is NMEA 2000 compatible. Therefore, you can hook it up to an already existent NMEA network on your boat so it can communicate with other boating instruments such as AIS units or DSC-capable VHF radio units.

The unit also has built-in Wi-Fi. This means it offers the possibility to create a Wi-Fi network in order to communicate wirelessly with other devices such as smartphones or tablets. Therefore, you can sync it with your smartphone and download data via the ActiveCaptain app, and even benefit from smart notifications from your phone on the chartplotter’s display.

The ECHOMAP UHD 65cv is equipped with one microSD card slot. Therefore, you can load it with an extra chart card or a card for data back up.

The Garmin ECHOMAP UHD 65cv is a fish finder and chartplotter offering UHD ClearVü sonar, 2D CHIRP sonar, GPS, and the Canada LakeVü g3 charts. It includes the new GT24UHD transducer for UHD ClearVü and High-Wide CHIRP. It also has the Quickdraw Contours function, NMEA connectivity, and wireless connectivity via the ActiveCaptain app. It’s one of the best 6″ display sonar and plotter combos at the moment, great for a wide variety of boats, for in-land fishing or off-shore fishing (if loaded with BlueChart maps).