The GP1971F is a CHIRP fish finder and chartplotter combo released by Furuno in 2018. It’s a multi-function display featuring touchscreen technology only without a keypad. Although it does not have structure scanning sonar or 3D sonar, it does offer a powerful CHIRP sonar great for fishing in deep water along with a fairly decent range of navigation features.

The first and most important aspect to mention here is that the Furuno GP1971F fish finder does not come with a transducer. It is compatible with quite a few transducer models, though. The list includes the 520-5PSD, the 520-5MSD, the 525T-PPD, or 1 kW transducers, such as the 526TID-HDD, the 525TID-TMD, or the 556TID-HDD. You can view the full list of compatible transducers here.

The unit’s built-in sonar is a dual-frequency type. It supports 50/200 kHz which makes it a great fish finder for deep water fishing. It should be able to scan at least 1,500 ft. (472 m) depending on the transducer you pair it with. Most transducers use conical beams with a coverage between 6° and 46°. Also, the unit’s CHIRP range is between 40 kHz and 225 kHz. 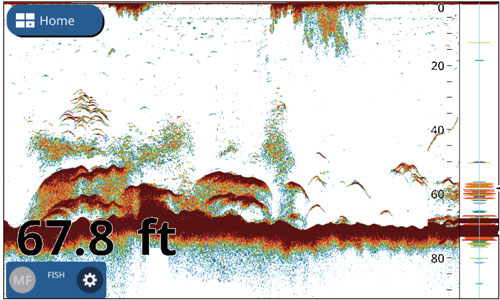 This Furuno fish finder does not have structure scanning sonar, such as DownScan or SideScan. However, it does offer several very useful standard sonar features. Among them, we can count ACCU-FISH, RezBoost, A-Scope, Zero Line, Bottom Discrimination, and more.

ACCU-FISH is similar to the Fish ID function offered by other fish finders, such as the Lowrance HOOK Reveal 9, or the Fish Symbols feature available with the Garmin ECHOMAP UHD 94sv. It assigns fish icons to the targets identified as fish scaling its size to the length of the fish. Each fish icon also has its current depth next to it. Not all transducers are ACCU-FISH capable, though. Some of the 600 W capable ones are the 520-5PSD, 525-5PWD, and 525STID-MSD, while some of the 1 kW ones are 50/200-1T or 526TID-HDD.

The RezBoost is an echo resolution enhancement function. It’s a pretty useful function to use if looking for fish that are near the seabed. The A-Scope is a vertical flasher that shows the most recent sonar echo. It is available in any fish finder mode and appears on the right side of the regular sonar view. Bottom Discrimination analyzes the seabed echo and categorizes the seabed hardness. Conversely, the Zero Line feature helps to locate fish near the surface as it hides the transmission line.

The Furuno GP1971F has a 72-channel built-in GPS receiver that operates at 1575.42 MHz. It can also use WAAS for position augmentation. It offers the possibility to save up to 1,000 routes in its memory, 30,000 waypoints, and record tracks with up to 30,000 points each. Also, each route can contain up to 50 waypoints. 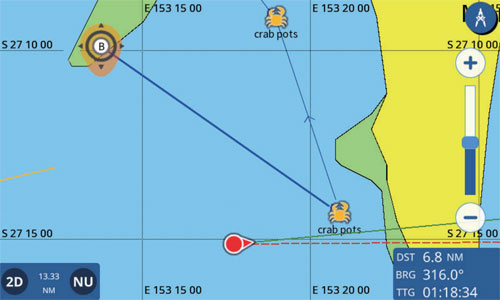 The unit does not have built-in charts, but its plotter application does indicate the boundaries between land and water, as well as provide a lot of other information. Also, the unit does have a dual microSD card slot and is compatible with the C-MAP 4D charts for enhanced detail, vector chart data, relief vectors, tidal streams, marine plans, and more. You can also view your charts in either birds-eye-view or in a 3D view.

The GP1971F offers autopilot integration. You can connect autopilot units such as NAVpilot 300 or NAVpilot 711C to the chartplotter unit via the CAN bus network interface and control it from the chartplotter. The unit also supports Radar; it is compatible with the Furuno DRS4W 1st Watch Wireless Radar. Plus, when connected to an AIS receiver, you can view AIS data on the Radar screen or the plotter screen.

The Furuno GP1971F features a 9-inch diagonal display, WVGA color, with a pixel resolution of 800H x 480V. It’s a full touchscreen unit without a side keypad, so it functions pretty much like any other tablet. It offers the possibility to customize your screen and work with up to three applications in split-screen. Its interface is pretty straightforward and easy to use.

In terms of networking, the unit has NMEA 0183 and NMEA 2000 ports so you can easily connect it to an already existing boat grid in order to communicate with other boating instruments. It does not have Bluetooth but does have wireless LAN connectivity. The wireless LAN function is available only in countries with acquired radio wave certifications, such as the USA, Canada, Australia, Japan, and all the EU countries. Via this type of wireless connectivity, you can update weather information as well as get software updates for your unit. Plus, it can work via wireless connection with the Furuno DRS4W Radar.

The unit also has two microSD card slots. Therefore, you can work with a chart card and a blank card for data back-up simultaneously. The unit comes with a standard tilt mount. A unit cover is not included.

The Furuno GP1971F is a fish finder and chartplotter offering dual-frequency CHIRP sonar, GPS plotter, radar and autopilot connectivity, NMEA connectivity, and wireless LAN connectivity. It offers a power output of 1 kW and supports 50 kHz transducers which makes it great for off-shore and deep water fishing. It is also compatible with charts like C-MAP 4D and supports AIS/DSC data. It’s a full touchscreen unit, easy to use, with a highly intuitive interface.