Just like the other first-generation HOOK units, the HOOK-9x is one of the discontinued Lowrance fish finders. It’s a fish finder only unit, featuring traditional CHIRP and DownScan sonar. For reference, this is the Lowrance part number 000-12183-001, the one that comes with the deepwater transducer.

Just like the new HOOK-9 unit, the Elite-9x CHIRP is capable of 50/83/200 kHz for 2D, and 455/800 kHz for DownScan. The supplied transducer, the 000-10977-001, or in other words the 50/200 HDI Skimmer, covers the 50/200 kHz frequencies for 2D CHIRP, and both 455/800 kHz for DownScan. Since it’s a CHIRP unit, it can modulate sonar pulse for the 2D broadband sonar, and use the Low CHIRP and High CHIRP modes. In case you’re not already aware, CHIRP sonar technology provides a better target separation and definition, while images are clearer, with less clutter. 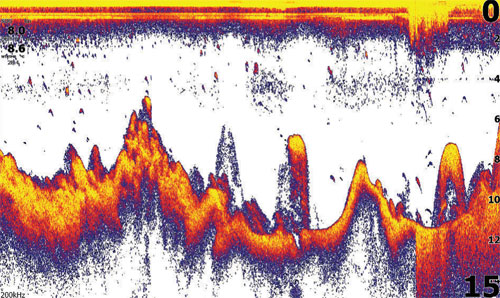 Since this transducer is capable of 50 kHz, the unit can actually scan depths up to 3,000 ft (914 m) in 2D, which makes it quite great for off-shore fishing. However, DownScan is not that powerful. It’s actually a sonar technology best used for lakes or reservoirs, at depths up to 300 ft (91 m). Also, one important aspect to mention here is that for DownScan the unit does not use CHIRP. However, there’s a function called DownScan Overlay, which gives you the possibility to blend 2D with DownScan, in order to see fish arches better, in relation to vegetation and structure. Also, the unit should be able to read the bottom at vessel speeds up to 35 MPH. However, the clearer images are obtained at vessel speeds between 1-6 MPH.

The transducer has a built-in temperature sensor, thus the unit can indicate the topwater temperature. Also, it comes with a transom mount and 20′ (6 m) of cable.

For 2D, the unit uses conical sonar beams, which are actually narrower than for the 83/200 kHz transducer. For the 50 kHz beam, the transducer will launch a beam at an angle of 29°, while for 200 kHz the beam is 12° wide. For DownScan, the beams are razor-thin fore-to-aft, around 2°, but wider side to side than the 2D beams. The angles are not specified (anywhere) though. The numbers in the specs section above are only estimations. 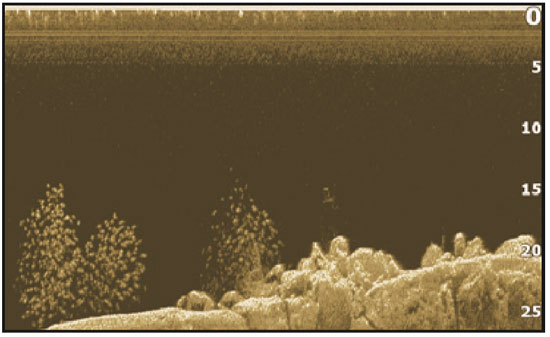 One important aspect to be mentioned here is that the unit is dual-frequency capable. This means it can scan in 2D using both 200/50 kHz frequencies simultaneously, and you can view the sonar returns in split-screen. The unit also uses Advanced Signal Processing, which basically is a type of auto-filtering, thus reducing the need to manually adjust settings, in order to distinguish fish from clutter or see the shapes and contours of structure in better detail.

There are several other sonar-related features that also require being mentioned here. These are the Fish ID mode, A-Scope function, Circular Flasher, Split-Zoom, and TrackBack.

Fish ID is a function that grants you the possibility to change the aspect of fish arches on screen and make them appear as fish icons. Of course, not all the fish icons will be fish, but most of them will. This function also makes the depth of each fish target more visible. Also, for this function, a Fish Alarm is available.

A-Scope or Amplitude Scope is a vertical flasher function that depicts the color-coding of the most recent sonar echo. It’s actually a real-time sonar, offering the possibility to know what’s exactly caught by the sonar beam at the current moment. Conversely, the Circular Flasher mode is a function designed for stationary fishing. The sonar returns will appear as color codes in a ring format. This sonar mode has a little bit of a learning curve, but once you master it, it’s pretty easy to understand and operate.

Last but not least, TrackBack is basically sonar recording. This function gives you the possibility to record the sonar history, and rewind it in order to review a specific spot, without having to turn the boat around, to rescan that particular area.

First of all, this unit features an NMEA 0183 port, which offers extra networking possibilities for the unit. Also, even though the unit doesn’t have charts or GPS, it does feature a microSD card slot, to use for sonar recording.

As the unit’s name suggests, it features a 9-inch display. Evidently, it’s a color unit, with a 16-bit color display, also featuring 11 levels of LED backlight. The pixel matrix of this unit is 800H x 480V, similar to the Humminbird HELIX 9 units. Also, the unit is IPX7 waterproof, which means it can resist incidental water exposure.

The unit comes with a classic tilt mounting bracket.

The Lowrance Elite-9x CHIRP 000-12183-001 is an excellent fish finder for both fresh and saltwater, offering CHIRP 2D and DownScan sonar technologies. Since it’s a rather big unit, it’s not exactly the most appropriate choice for smaller boats, like kayaks or canoes, but for bigger boats, it’s perfect if you don’t need GPS and charts. All in all, it’s a decent deepwater fish finder, and since there are newer units available, discounts for it will be coming soon, if they haven’t yet.