The Elite-9 Ti2 is one of the Lowrance fish finder and chartplotter combos available in several bundles. We’ve already covered the one that comes with the U.S. Inland maps only. So, in this post, we’re going to address the one that includes the Navionics+ charts and the Active Imaging 3-in-1 transducer. For reference, this is the Lowrance part number 000-14649-001. 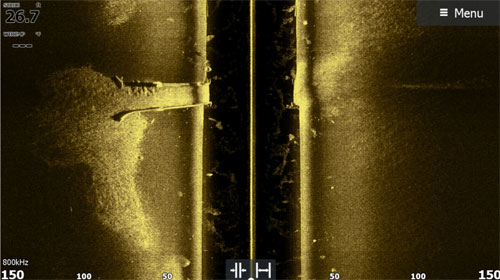 The included AI 3-in-1 transducer is designed to provide superior clarity and depth penetration to the older TotalScan. This transducer includes a transom mount but also offers trolling mounting possibilities. It integrates a temperature sensor, has 25′ (7.6 m) of cable and a 9-pin connector.

With the included transducer, this Lowrance fish finder can use the 83/200/455/800 kHz frequencies. However, the unit is also 50 kHz capable. Thus, you can pair it with a 50/200 kHz transducer for greater depth penetration, if needed.

The system’s greatest depth capability with the included transducer is 1,000′ when using the 2D CHIRP sonar, at 83 kHz. For the 2D sonar, the transducer uses conical beams. Their exact coverage and the exact CHIRP range is not specified. 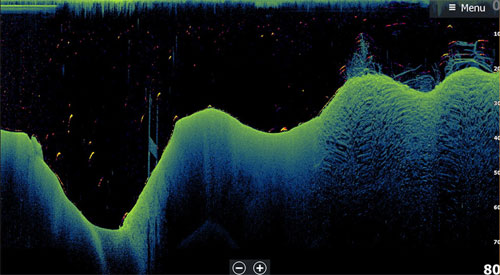 For SideScan and DownScan, the Active Imaging 3-in-1 transducer uses the 455/800 kHz channels. Its maximum depth capabilities are 300′ (91 m) at 455 kHz, while the side range of the SideScan beams reaches 300′ (91 m) on each side at 455 kHz, and 150′ (46 m) at 800 kHz (a bit better than the TotalScan transducer). Just as for the previous SideScan / DownScan transducers, the beams used by the Active Imaging 3-in-1 transducer for these sonar technologies are conical. Their exact coverage is not specified, though.

The unit makes available a wide array of standard sonar features. To begin with, it has the new FishReveal feature. This is a smart targeting application that allows you to bring the fish arches visible with the 2D CHIRP sonar into the DownScan view. This way, you can distinguish better between structure and fish. Overlay DownScan is also available; this feature is basically the reverse of the FishReveal, as it opens the possibility to use basic DownScan functions into the 2D sonar view.

As the title suggests, this Lowrance Elite-9 Ti unit includes the Navionics+ charts. This chart platform is not built-in the unit, though. It comes on a microSD card. These charts cover the U.S. and Canadian waters providing superior detail and information for each point of interest, depth contours, dynamic tide, and current information, shallow water shading, and more. They also open access to the Navionics SonarChart mapping feature. 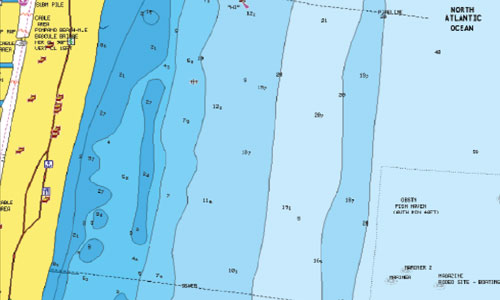 But nonetheless, the unit has its own built-in mapping feature – the new Genesis Live. This gives you the possibility to reveal and record the depth contours of your lake as you sail your boat. This way, you can create your own personalized charts with the most up-to-date contours.

It’s important to mention, though, that Genesis Live saves its recordings on your memory card. Therefore, in order to use this feature, you will need a data microSD card inserted into the unit. Also, the maximum sailing speed recommended for the best Genesis Live detail is 20 knots (23 MPH). 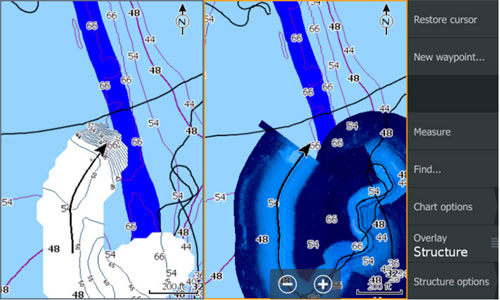 If for some reason you’re not going to use the Navionics+ charts, the unit still has you covered. It has its own basic charts. The preloaded U.S. Inland maps cover more than 4,000 U.S. lakes with 1-foot contours. They don’t offer super detail, but still provide considerably more awareness than a basic GPS plotter. Also, along with Navionics+, the unit support Navionics Platinum+, C-MAP MAX-N, C-MAP MAX-N+, or Insight Pro and Insight HD.

StructureMap is another mapping feature available with the Elite-9 Ti2. This feature gives you the possibility to overlay images recorded from the SideScan sonar on your map. This offers a better view of the underwater structure in relation to the depth contours and your boat. It can also help with a better interpretation of the SideScan sonar view.

Since it’s a chartplotter, the Elite-9 Ti2 is equipped with a GPS receiver. It has a 16-channel 10 Hz internal GPS antenna, so the unit can provide position updates 10 times per second. It supports WAAS, EGNOS, and MSAS for position augmentation, and also has a GPS speed function.

The unit has waypoint creation, route creation, and trackplotting functions. You can save up to 3,000 waypoints in its memory with the possibility to choose between various waypoint icons for extra personalization. The unit can also hold up to 100 saved routes and 100 saved tracks; each track can have a maximum of 10,000 points.

SmartSteer is also included with this Lowrance unit. This offers autopilot and other functions for MotorGuide Xi5/Xi3 trolling motors; however, this requires MotorGuide PinPoint Gateway. It provides control for Power-Pole anchors. It can also show data from an AIS unit but does not support Radar.

The Lowrance Elite-9 Ti2 features the same display as the HOOK2-9. It’s a 9-inch color display, with a pixel resolution of 800 x 480. It’s a SolarMax display, with adjustable LED backlight (1200 nits), offering superior readability even in direct sunlight or when wearing polarized sunglasses.

The unit is IPX7 waterproof. This means it should withstand incidental water exposure and rain with no problem. It includes the classic Gimbal mount and a unit cover.

The unit’s interface has touchscreen technology. In other words, it responds to all touch commands just like any tablet or smartphone. However, it still has several side buttons for the quick access of certain functions such as zoom, change page, or power ON/OFF. Also, the display offers a split-screen view with up to three panels and the homepage can be personalized with the most used applications for quick access.

In terms of networking capabilities, the Elite-9 Ti2 Active Imaging 3-in-1 is definitely superior to the HOOK2-9 TripleShot. To begin with, it has Ethernet and NMEA ports. This being said, you can connect it to an already existent boat grid and it can communicate with various other boating instruments such as AIS units, or GPS heading sensors. However, it does not support Radar.

Wireless connectivity is also available. The unit has an internal 802.11 b/g/n WiFi module and integrated Bluetooth. Therefore, you can either sync it with your smartphone or tablet to control it remotely, or you can connect to a WiFi hotspot for downloads, uploads, software updates, etc.

Last but not least, the unit has a microSD card slot which you can load with the included Navionics+ card, or with a blank card for data backup, sonar recordings, or Genesis Live mapping.

The Lowrance Elite-9 Ti2 000-14649-001 is a fish finder and chartplotter that offers Active Imaging 3-in-1 sonar (2D CHIRP, DownScan, SideScan), 10 Hz GPS, Navionics+ charts, Genesis Live, wireless connectivity, superior networking capabilities, and a wide array of other features. It includes the new Active Imaging 3-in-1 transducer which supports all three types of sonar provided by the unit. It’s an excellent unit for both inland and off-shore fishing and a versatile navigation tool great for a wide range of boats.