The Element 9 HV is one of the new fish finder and chartplotter combos released by Raymarine in 2019. As opposed to the older Raymarine MFDs in this price range, this one offers HyperVision sonar technology with 1.2 MHz scanning possibilities. In this post, we’re going to address the Element 9 HV E70534-05-101 which includes the LightHouse NC2 charts and also comes with the HV-100 transducer. 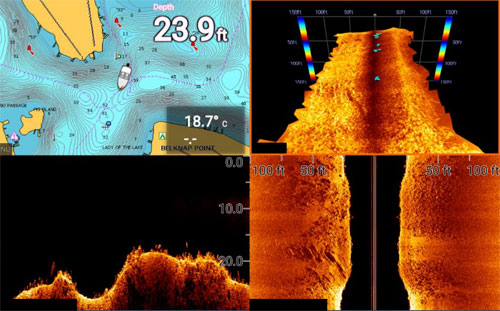 It’s important to mention that the unit does not support 50 kHz or 83 kHz sonar frequencies. So, in case it is paired with a different 50/200 kHz transducer, it will only be able to use the 200 kHz channel.

The unit includes the HV-100 transducer which supports all four sonar technologies built-in the unit, including the Hyper modes. This transducer features 20 ft (6 m) of cable, a 15-pin connector, and has a built-in temperature sensor. A 13 ft (4 m) cable extension is also available for it (but not included). Its part number is A80562.

For the 2D CHIRP sonar, the transducer uses a conical beam that can reach depths up to 900 ft (274 m). The CHIRP frequency range and the exact coverage of the beam are not specified.

In terms of standard sonar features and functions provided by the Raymarine Element 9 HV unit, we can mention A-Scope, Bottom Lock, Sonar Scrollback, White Line, Fish Icons, various alarms, and more. For the RealVision 3D mode, you can add or remove the 3D boat icon, as well as change the angle of the 3D view. A Temperature Graph function is also available. However, the unit does not have a Circular Flasher view for ice fishing.

Since this is the Raymarine Element 9 HV E70534-05-101, it includes the LightHouse NC2 charts with Fishing HotSpots. This chart platform offers an enhanced world basemap which points out some of the best fishing locations. It also provides a lot of other information, including underwater structure, vegetation, bottom layout, nav-aids, tide stations, and a wide array of points of interest. 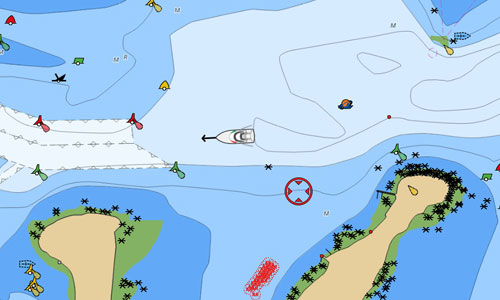 The coverage of the LightHouse NC2 charts includes the contiguous U.S., Alaska, Hawaii, the Bahamas, and all the Great Lakes with their related waterways. They cover more than 6,000 inland lakes, rivers, and reservoirs, and 80,000+ miles of charted saltwater coastline. They also cover the Canadian west coast and B.C. area. Needless to say, the unit also supports other charts, including Navionics+, Navionics Platinum+, C-MAP Essentials, and C-MAP MAX+.

The Element 9 HV supports the Navionics’ SonarChart, but also has its own bathymetry feature. This is the new RealBathy which is included with all the Element units. This is a similar application to SonarChart or the AutoChart Live offered by most of the Humminbird units. It uses the 2D sonar data and the GPS data to reveal and draw the depth contours of the lake you’re scanning on your map. Therefore, it gives you the possibility to create your own custom fishing charts with the most up-to-date depth contours. It’s important to mention, though, that the RealBathy feature requires a data microSD card as support. It cannot record on the internal memory of the unit. 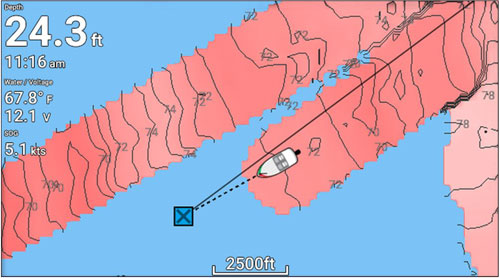 The unit’s internal GPS offers a frequency range between 1574 MHz and 1605 MHz and 28 channels. It is GLONASS compatible, and also supports MSAS, WAAS, EGNOS, QZSS, and GAGAN. Waypoint creation, route creation, and trackplotting functions are also available. The Element 7 HV can save up to 50 routes with 250 waypoints per route, and a total of 5,000 saved waypoints with various icons. It can also save up to 15 plotted tracks; each track can have up to 10,000 points.

In terms of other navigation features, the Element 9 HV offers VHF Radio units support. However, it does not support Radar. It also supports quad tank sensors, GPS heading sensors, and other SeaTalk compatible instruments.

As its name suggests, the Raymarine Element 9 HV features a 9-inch display. Its pixel resolution is 800H x 480V. Needless to say, it’s a full-color unit, with LED backlight (1,500 nits) in order to provide the best readability even in direct sunlight. It is also IPX6 and IPX7 waterproof.

In terms of internal hardware, the unit has a quad-core internal processor; therefore, all the applications are highly responsive. It has 8.0 GB of internal memory for waypoints, routes, and other data storage. It also has a microSD card slot for charts or external data storage.

The unit has a highly intuitive and very easy-to-use interface. It does not have touchscreen technology, though; it is entirely operated via the keypad on the right.

The unit’s operating system is the new LightHouse Sport which offers pre-configured application pages for quick selection, allows quick waypoint creation and quick access to the most commonly used waypoint symbols, and gives you the possibility to work with up to four applications simultaneously in split-view format.

In terms of networking, the unit supports NMEA 2000 and SeaTalk so you can integrate it into an already existent boat grid and enable communication and feedback from other devices such as heading sensors, VHF radio, etc. Wireless connectivity (WiFi and Bluetooth) is available as well. Therefore, you can connect it to a WiFi hotspot to download software updates or sync it with your smartphone or tablet.

The included mount for the unit is the standard trunnion bracket. However, an in-dash mounting kit is also included. The box also includes a sun cover.

The Raymarine Element 9 HV E70534-05-101 is a fish finder and chartplotter combo offering CHIRP Sonar, HyperVision Sonar, 2D CHIRP Sonar, GPS, the LightHouse NC2 charts, and RealBathy. It includes the HV-100 transducer which supports all the four sonar technologies built-in the unit – 2D CHIRP, SideVision, DownVision, and RealVision 3D, including their HyperVision (1.2 MHz) modes. It also offers excellent networking possibilities via NMEA 2000 and SeaTalk; plus, it has internal WiFi and Bluetooth. It’s an excellent unit for inland fishing and navigation, but can also be used offshore with no problem if you don’t require deepwater scanning.