The ECHOMAP Plus 73cv Panoptix Ice Fishing Bundle is one of the best ice fish finders from Garmin. The main reason for that is the included Panoptix PS22-TR transducer that not only offers a live feed of the underwater environment, it can also save you a lot of trouble when on the ice. It offers several other great features as well, such as LakeVü g3 charts and built-in WiFi. For reference, this is the Garmin part number 010-01893-21.

The Garmin ECHOMAP Plus 73cv Panoptix Ice Fishing Bundle includes two transducers, the Panoptix PS22-TR for LiveVü Forward and LiveVü Down sonar, and the classic ice transducer GT10HN-IF for 2D CHIRP traditional sonar. Also, since the unit is the Garmin ECHOMAP Plus 73cv, it supports ClearVü sonar, so you can pair it with a GT20 transducer, or other ClearVü capable transducers. The unit supports multiple frequencies, including 50/77/200 kHz for 2D sonar, and 260/455/800 kHz for ClearVü, and also supports the 417 kHz channel of the Panoptix PS22 transducer.

The Panoptix live sonar offers quite a few advantages when on the ice compared to the classic flasher type of sonar. To begin with, the Panoptix PS22-TR has a special barrel mount that allows you to easily rotate it in order to change its angle and a long handle for easy scanning. The transducer itself operates at 417 kHz and emits an oval beam of 120°x20°. Its maximum range is 300 ft. (91 m). Due to the barrel mount, you can orient the transducer either forward for using LiveVü Forward, or down, if you want to use LiveVü Down. The first advantage here is that you only have to cut one ice hole, drop the transducer in the water, scan the surroundings by using LiveVü Forward mode in order to locate the fish, and then simply go to the location with the biggest fish concentration and dig the second hole. So, the LiveVü Forward mode basically saves you the trouble of cutting multiple ice holes and scanning each one of them. 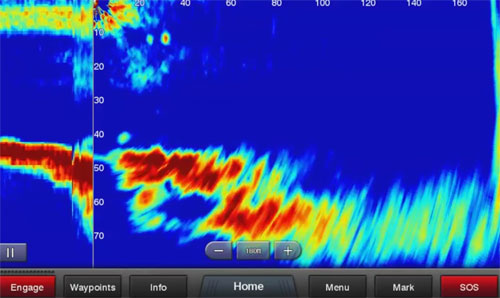 Once you’ve located your fish, you can swap on the LiveVü Down mode for scanning directly under the ice hole. So, a second advantage here would be the wide-angle (120°) of the Panoptix transducer. It should cover at least 20 ft. (6 m) on each side of the hole and you will be able to pin-point your fish with accuracy. 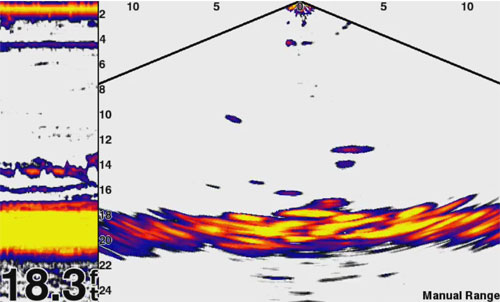 Of course, the third advantage of the Panoptix sonar is that you will see the fish and jig movement in real-time. You won’t have to guesstimate where your jig is or where the fish are in relation to it. You will actually see the fish attacking it.

The ECHOMAP Plus 73cv Panoptix Ice Fishing Bundle also includes the GT10HN-IF classic transducer which uses a High Narrow CHIRP beam. It operates in a CHIRP range of 130-300 kHz and it emits a standard conical beam with a coverage between 8°-16°. Its maximum depth capability is 800 ft. (244 m). The unit also has the Circular Flasher sonar application which shows the sonar information on a circular depth scale.

It’s important to mention here that since the Panoptix PS22-TR transducer has its own separate port from the GT10HN-IF, you can connect both transducers to the unit at the same time. Also, the unit offers the possibility to create various page combinations and work with the standard flasher, the Panoptix sonar, and the map simultaneously.

Since this Garmin Panoptix Ice Fishing Bundle includes the ECHOMAP Plus 73cv unit, you will have access to a wide array of navigation features as well. First of all, the unit has a 5 Hz internal GPS receiver. Therefore, it can provide position updates 5 times per second. It offers position augmentation possibilities via WAAS and EGNOS, and also has a GPS speed function. Plus, the unit has waypoint creation, route creation, and trackplotting functions. Thus, you can save up to 5,000 waypoints in its memory, 100 routes, and 50 tracks. 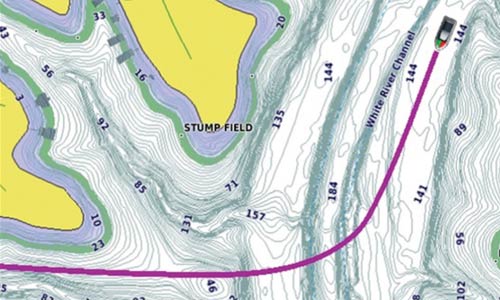 The unit is preloaded with the new (2019) LakeVü G3 charts that are integrated with Navionics data. They offer freshwater coverage, presenting more than 17,000 U.S. lakes, rivers, and reservoirs in high detail with up to 1-foot depth contours. The Shallow Water Shading feature is available with these charts. Plus, they show fishing areas, boat ramps, camping grounds, marinas, general roads, interstates and other points of interest.

The unit is compatible with LakeVü G3 Ultra and BlueChart G3 Vision. Therefore, if you will ever want to turn your ECHOMAP Plus 73cv into a boating unit, Garmin has you covered. 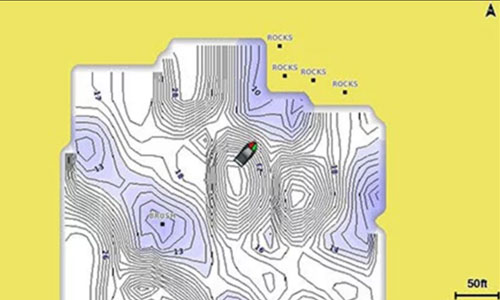 The Quickdraw Contours feature is also available, although this depth contour recording application is best used when the unit is mounted on a boat. Quickdraw Contours uses the 2D sonar data and the GPS data in order to draw and save the depth contours of the lake you’re scanning on the map. Therefore, you can create your own personalized fishing maps.

The Garmin ECHOMAP Plus 73cv unit features a WVGA color display, with a 7-inch diagonal and a pixel resolution of 800H x 480V. It has LED backlight and is also IPX7 waterproof.

The unit has integrated touchscreen technology, so it can be operated as a tablet, but most of its functions can also be accessed and used via its side keypad. Its interface is user-friendly and highly intuitive. You can pin to the start page multiple applications for quick access. It also offers the possibility to view and work with up to four applications simultaneously.

The unit has built-in WiFi. Therefore, you can connect online via the free ActiveCaptain app in order to pre-plan your fishing trip, download software updates, charts, etc. It also supports NMEA 0183 and has one microSD card slot.

The included ice fishing kit consists of a carrying case, a tilt-swivel mount, the foam floater for the GT10HN-IF transducer, a grommet for cable management, and of course, a rechargeable 12Ah battery and a charger for it.

The Garmin ECHOMAP Plus 73cv Panoptix Ice Bundle is a complete ice fish finder, including the Panoptix PS22 & GT10HN-IF transducers, and the ice fishing portable kit. The unit has internal GPS, the LakeVü G3 charts, Quickdraw Contours, and a wide array of other fish finding and navigation features. It’s not one of the most affordable ice fishing systems but definitely has much more to offer than the classic ice flashers. Plus, it can be paired with various other transducers from Garmin and converted into a boat unit anytime.