The echoMAP CHIRP 92sv is one of the discontinued Garmin fish finders. It’s a chartplotter as well, pre-loaded with the Worldwide Basemap. As opposed to the newer models, it lacks the WiFi connectivity feature. For reference, this is the Garmin part number 010-01816-02, the one that comes with the High-Wide CHIRP and ClearVü/SideVü transducer.

The Garmin echoMAP CHIRP 92sv 010-01816-02 includes the high wide CHIRP and CHIRP ClearVü/SideVü transducer (GT52HW-TM), which features 20′ (6m) of cable with a 12-pin connector, and also integrates a temperature sensor. The box includes two types of mounts for this transducer, a transom mount, and a trolling motor mount. 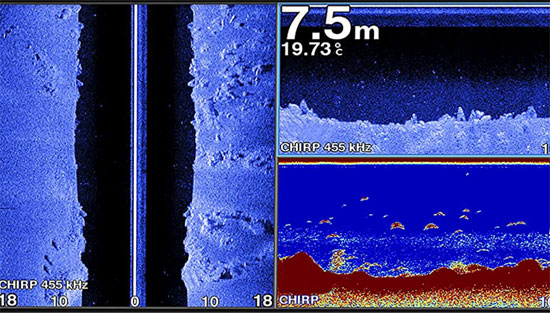 For 2D traditional view sonar, this unit can scan at 50/77/200 kHz, but also gives you the possibility to input a custom frequency. However, with the supplied transducer it can only use High Wide CHIRP, being able to modulate the pulse between 150-240 kHz. The sonar beam used by the transducer for this frequency interval is conical, with an angle that varies between 24° and 16°.

For SideVü and ClearVü, with the supplied transducer, the sonar pulse is modulated between 425-485 kHz and 790-850 kHz. The sonar beams used for these frequencies are not conical, but razor thin, with angles of 50°, and respectively 30°. Also, for SideVü sonar the side beams can extend up to 750 ft (228 m) on each side of the boat.

The unit also has the Panoptix sonar technology. However, with the included transducer, you cannot use this type of sonar. In order to use Panoptix LiveVü, you will need a PS21-TM transducer or a PS31.

The unit makes available several useful standard sonar functions, among which we can count Fish Symbols, Bottom Lock, A-Scope, Fish Alarms and Sonar Recording. The Fish Symbols function assigns fish icons to the suspended targets and also indicates the depth of each target. There are multiple fish alarms available, and you can setup to the unit to notify you when it discovers a fish of a certain size. A-Scope is a vertical flasher view, which indicates the information caught by the most recent sonar view. Bottom Lock is a function that allows you to lock the view of the sonar close to the bottom in order to look for bottom feeders. And finally, the Sonar Recording and Rewind functions require a blank SD card to be inserted in the unit, in order to be able to save the sonar feed. Also, as a general idea, approx. 15 minutes of recording will take 200 MB of space. Recorded data can be seen on a PC via the free HomePort application.

One of the main reasons the Garmin echoMAP CHIRP 92sv is cheaper than the other 9-inch units is that it only has the Worldwide Basemaps as support for navigation. Although these charts do not offer the detail of LakeVü HD or BlueChart g2, they do cover the United States, Canada, Alaska, Mexico, Central and South America, Europe, Africa, Asia, Australia, and Oceania. Their coverage includes oceans, major streams, rivers, small lakes, political boundaries, railroads, highways, major interstates, principal cities and smaller cities. However, the unit’s charts can always be upgraded to BlueChart g2 HD, BlueChart g2 Vision, LakeVü HD or LakeVü HD Ultra.

Even though the unit only has basic charts, it still has the Quickdraw Contours feature. This tool uses the GPS and 2D sonar data, in order to determine and draw the depth contours of the body of water you’re scanning. Therefore, it basically gives you the opportunity to see and make use of the most recent depth contours of your lake. 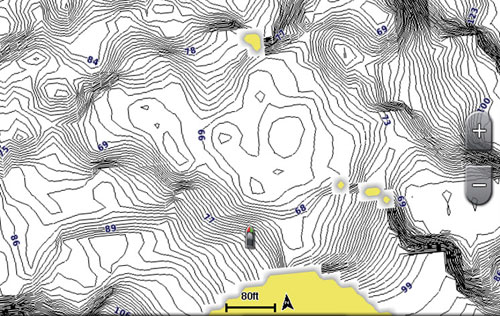 The echoMAP CHIRP 92sv integrates a fast and accurate internal GPS. The GPS module operates at a 5 Hz frequency, being capable of updating your position up to 5 times per second. Via GPS, the unit can also calculate the speed of your boat, and needless to say, it shows your current coordinates or the coordinates of any point of interest.

Waypoints, routes, and tracks functions are also available. The unit is capable of storing up to 5,000 waypoints with various icons, to help you distinguish between fishing spots and other points of interest. It can record up to 50 tracks, with up to 50,000 track points. And you can also save up to 100 routes.

As its name suggests, this is a unit with 9″ display, full color, with a pixel matrix of 800 x 480, providing excellent imaging. Brightness is adjustable. In fact, the display integrates LED backlight to provide a good view of the images on the screen, even in direct sunlight.

The unit is IPX7 waterproof, which means it can resist incidental water exposure, such as rain, snow or splashes, without any issue. This waterproof rating also specifies that the unit can also withstand immersions up to 1 m and 30 min, in freshwater.

The box includes a quick-release cradle, tilt mount, flush mount kit and a protective cover. The transducer connector is a 12-pin one. NMEA 0183 ports (1 input, 1 output) are also available. Plus, the unit features a microSD card reader with one card slot.

Last but not least, this unit supports Minn Kota and MotorGuide trolling motors with integrated transducers and offers readings for various motor parameters.

The Garmin echoMAP CHIRP 92sv is a fish finder and chartplotter offering CHIRP sonar, ClearVü, and SideVü, along with a powerful internal GPS, and the Worldwide Basemaps. It’s compatible with premium BlueChart and LakeVü charts, and also has Panoptix sonar technology, featuring one Panoptix transducer port. It’s a versatile unit, packing a wide array of features and functions for navigation and fishing in both freshwater and saltwater. It’s one of the most affordable 9-inch units from Garmin, and also includes a high wide CHIRP Cv and Sv transducer. In all, it’s an excellent unit for any bass boat or professional fishing boat.