Similar to the echoMAP CHIRP 54dv, this Garmin unit is one of the units released at the beginning of 2016. It’s also one of the Garmin units that were discontinued in 2018. For reference, this is the Garmin part number 010-01572-01, the one that includes the GT23M-TM transducer, and the old BlueChart g2 maps. Also, one of the newer units with extra features is the ECHOMAP UHD 74cv.

GPS, charts and other navigation features

The echoMAP CHIRP 74dv (010-01572-01) comes with the BlueChart g2 maps, which cover the coastal waters of the U.S. and Bahamas, including the West Coast, East Coast, the U.S. part of the Great Lakes and the Gulf of Mexico. BlueChart g2 also opens several functions. For example, there’s a Safety Shading option, via which you can designate up to 10 different depth ranges, and assign them to the depth contours, making it much easier to see target depth at a glance. The charts also include currents, tidal stations, IALA symbols, and depth contours, pretty much all information included by NOAA charts. Fishing charts next to the base charts also feature bathymetric contour with less visual clutter. Also, BlueChart g2 offers quite a smooth transitioning between zoom levels, and excellent continuity across chart boundaries.

As we’ve mentioned above, one of the newest features available with this unit is the Quickdraw Contours. This function is somewhat similar to the AutoChart Live function offered by Humminbird fish finders, such as the HELIX 12 SI GPS, for example. This particular function offers the possibility to add depth contours to your maps as you navigate, based on the sonar readings. Thus, no matter what charts you use in your unit, there won’t be any corners of your favorite lake uncharted. 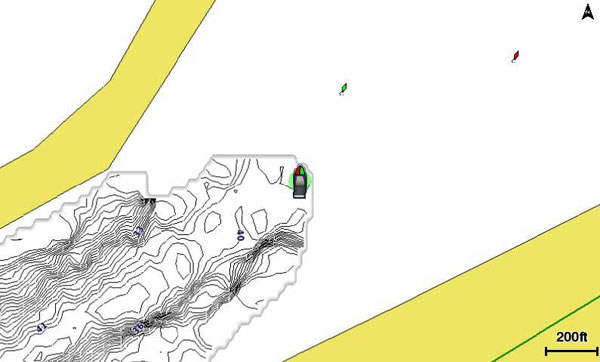 This unit features a fast and accurate, 5 Hz internal GPS/GLONASS receiver, offering position and heading updates 5 times per second. The speed of your vessel is also tracked via GPS.

And finally, it can save up to 5,000 waypoints, and 100 routes. It also has a trail recording function, allowing you to save 50,000 track points and up to 50 tracks. Evidently, you can convert tracks into routes, add waypoints to them and retrace them.

Just as the Garmin echoMAP CHIRP 54dv, this unit comes with the GT23M-TM transducer. However, its cable features an 8-pin connector and not a 4-pin one. This transducer is temperature capable as it integrates a temperature sensor. It’s supplied with 30′ (9.1 m) of cable, and mounts for transom and trolling motor. 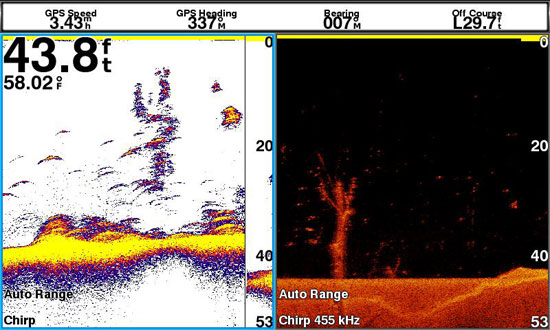 The control unit is capable of 50/77/200 kHz frequencies for traditional 2D, but since it can use CHIRP, with the given transducer, it’s able to use Mid-Band CHIRP, the pulse being modulated between 80-160 kHz, with a conical angle between 24°/13°. This being said, you will benefit from crispier imaging and better target separation. In other words, fish targets will appear better defined. Even if they stick close together, you’ll see the fish arches separated, rather than a big lump on screen.

For DownVü sonar, the unit also uses CHIRP, the pulse being modulated between 245-275 kHz and 445-465 kHz. Of course, the unit can still use the classic 260/455/800 kHz frequencies. The cones used for Dv are thin, not conical, at angles of 51° and 32°, actually offering better coverage than 2D CHIRP, with the given transducer.

Just like the other 7-inch display units released this year by Garmin, this particular one features several other sonar-related functions. Among these, we can count Split-Zoom, Split-Frequency, Sonar Recording, and Sonar Rewind, Circular Flasher, Bottom Lock, Data Graphs, and more.

As opposed to the older echoMAP units, this one comes with a different connection system. All cables plug into the mount, while the unit plugs into the mount via a multiple pin connector. It offers NMEA 0183 and NMEA 2000 connectivity possibilities, an out for Panoptix transducers, and also features a microSD card slot for software updates, new charts, data transfer etc.

As its name suggests, the unit features a 7-inch WVGA display, with an 800 x 480 pixel matrix, with LED backlight, also being IPX7 waterproof. There are various image combos available, the unit offering the possibility to view up to 3 panels simultaneously.

Last but not least, the box includes tilt-and-swivel mount, flush-mount, and a protective cover.

In terms of sonar, the Garmin echoMAP CHIRP 74dv is Panoptix sonar capable. Panoptix is actually one of the newest sonar technologies available, which gives you the possibility to see live sonar images, view your lure and the fish attacking it in real time. Panoptix sonar becomes available only with a specific Panoptix transducer, such as the Panoptix PS31 or the PS21-TM. Also, the unit is compatible with various other types of transducers, such as 50/200 kHz models, which offer greater depth scanning possibilities.

For navigation, this unit is also compatible with various charts such as BlueChart g2 Vision and LakeVü HD Ultra (US or Canada). These chart packs also make available the Enhanced Auto Guidance function, which instantly searches through your charts to offer the safest virtual paths between two points of interest. This function also allows you to calculate arrival times, create safe Auto Guidance routes, and set your autopilot system to follow them, in case you have one.

The Garmin echoMAP CHIRP 74dv is a mid-range sonar and chartplotter combo, with CHIRP 2D and CHIRP DownVü technology, also being compatible with the new Panoptix sonar technology. Due to the fact that it comes with the BlueChart g2 maps, it’s basically a unit for off-shore use. However, you can equip it with LakeVü charts in case you want to use it for inland fishing. It comes with a powerful transducer, with depth capabilities up to 1,800 ft. It’s an excellent choice for the wide majority of boats. And finally, since it includes a pretty expensive transducer, and a wide array of features, functions, and capabilities, it’s definitely a package that worth the price.