The echoMAP CHIRP 55cv is one Garmin fish finders released in 2017, and on the list of discontinued units. For reference, this is the Garmin part number 010-01818-00, the one that includes a transducer, and comes with the Canada LakeVü HD charts.

In terms of charts this unit is pre-loaded with the Canada LakeVü HD charts bundle. These charts cover 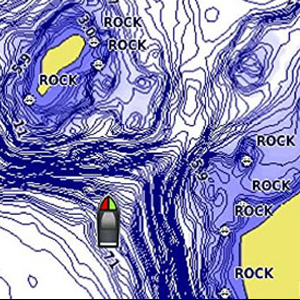 On the other hand, this Garmin unit is compatible with various other chart bundles, including U.S. LakeVü HD, BlueChart g2 Vision or U.S. LakeVü HD Ultra, or with the Canada LakeVü Ultra. The LakeVü HD Ultra and BlueChart g2 Vision make available the Enhanced Auto Guidance feature. This feature gives you the opportunity to use several useful functions. For example, it can instantly search through the charts to offer the safest virtual paths between two points of interest, it can also calculate your arrival times or enable your AutoPilot to follow a safe route.

This unit also has the Quickdraw Contours function, which uses the 2D sonar and GPS information in order to draw the depth contours of the lake in which you’re fishing. This way, even if your local lake is not covered by the LakeVü charts or the charts you’re using, you can still benefit from the latest, most up-to-date contours by using this function.

The 010-01818-00 is equipped with a fast and accurate internal GPS, which operates at a frequency of 5 Hz, being able to update your position up to 5 times per second. Also, the unit can indicate your vessel speed by using the GPS data.

Another navigation-related function is Shallow Water Shading. This allows you to color code some of the depth contours in order to view at a glance which is the safest path to sail. 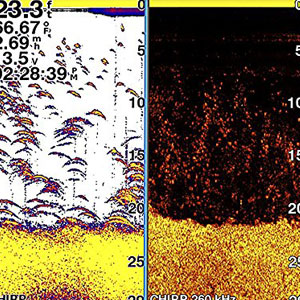 also integrating a temperature sensor. This unit also supports various other transducers than the one supplied. For example, you can pair it with the GT20-TM, or the GT21-TM for example. But in case you’re going to opt for a different transducer, you might need a cable adapter. The unit features a 4-pin connector.

The control unit can operate at three frequencies for its 2D traditional sonar, these being 50/77/200 kHz, while for ClearVü it’s capable of scanning at 260/455/800 kHz. However, with the included transducer, it can only use High Wide CHIRP, modulating the sonar pulse between 150-240 kHz when using its 2D mode.

For ClearVü, the system can use two CHIRP ranges, these being 425-485kHz and 790-850 kHz. CHIRP pulse modulation delivers images with less clutter, better separation between fish targets, and between fish and structure.

Depending on the transducer you will be using, this unit can reach depths up to 1,800 ft (548 m) for 2D and 1,000 ft (305 m) for ClearVü. But the supplied transducer has slightly lesser depth capabilities, being capable of only 800 ft (243 m) in 2D, and 500 ft (152 m) in Dv. This is still not bad for a small unit, meaning that you should be able to use it for off-shore fishing as well, as long as you don’t go for deeper waters. Also, the recommended boat speed for scanning with this unit is between 1-6 MPH. The unit should be able to maintain a bottom reading even at higher speeds, but in general, the higher the speed, the fuzziest the images.

Just like the other similar units, the Garmin echoMAP CHIRP 55dv features several useful sonar functions for its 2D sonar. These are Fish Symbols, Fish Alarm, Depth Alarm, A-Scope, Bottom Lock, and a few others. Also, the unit offers the capability to record the sonar history and rewind it, if you want to have another look at a particular spot that you have scanned. To use sonar recording and rewind you’ll need a blank microSD card to be inserted in the unit as support for the recorded data.

One of the first aspects of the control unit is its power output. This unit is actually capable of 500 W (RMS) / 4,000 W (PTP) power output. However, the transducer has its limitations. Its transmit power is 250 W for 2D and 350 W for DV. So, differently put, the unit’s maximum depth capability is 1,800 ft. but with this transducer, you’ll get a max. depth capability of 800 ft. (as we’ve mentioned above).

As the name of the unit suggests, it’s 5″ display unit. It features a square display with a pixel matrix of 480H x 480V. Evidently, the display is color (WQVGA), also featuring LED backlight. Also, it’s IPX7 waterproof, which means it can withstand incidental water exposure, such as rain, or splashes.

This unit is NMEA 2000 and 0183 capable, also featuring a microSD card slot, for charts, data transfer, and sonar recordings. And finally, it comes with two mounts, flush and classic tilt/swivel, the box also including a unit cover.

The Garmin echoMAP 55dv is an excellent GPS / fish finder combo for just about any small boat. It uses CHIRP technology for both its types of sonar, traditional and ClearVü, and comes with a CHIRP transducer. It also features the Canadian LakeVü HD charts, but it’s also compatible with various other chart packs from Garmin. It has excellent depth capabilities and can be used successfully in both saltwater and freshwater. In all, it’s a fishfinder and navigation system with a decent price/quality ratio.