The echoMAP CHIRP 54dv is one of the fish finder and chartplotter combos that have been discontinued by Garmin. It’s a fish finder and chartplotter featuring Broadband CHIRP sonar and DownVü sonar, along with the older BlueChart g2 maps. For reference, this is the 010-01568-01 unit, the one that comes with the GT23M-TM transducer. Also, in case you’re wondering, one of the newer versions is the ECHOMAP Plus 64cv.

On the other hand, the unit itself is capable of 50/77/200 kHz frequencies for traditional 2D, but since it can use CHIRP, with the given transducer, it will be able to use Mid-Band CHIRP, the pulse being modulated between 80-160 kHz, with a conical angle between 24°/13°. This being said, you will benefit from crispier imaging and better target separation. In other words, fish targets will appear better defined. Even if they stick close together, you’ll see the fish arches separated, rather than a big lump on screen. 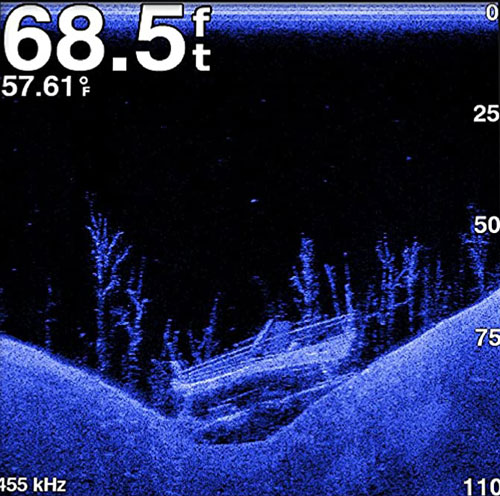 The unit supports dual-frequency sonar. This means that if you’re going to use a dual-frequency transducer, you will be able to view both 2D sonar returns in split-screen simultaneously.

For DownVü sonar, the unit also uses CHIRP, the pulse being modulated between 245-275 kHz and 445-465 kHz. Of course, the unit can still use the classic 260/455/800 kHz frequencies. The cones used for DownVü are thin, not conical, at angles of 51° and 32°, actually offering better coverage than 2D CHIRP, with the given transducer.

There are several sonar related functions that this unit provides. Among them, we can number Split-Zoom, Split-Frequency, Sonar Recording and Sonar Rewind, Circular Flasher, Bottom Lock, Data Graphs, and more.

This unit features a fast and accurate, 5 Hz internal GPS/GLONASS receiver, offering position and heading updates 5 times per second. The speed of your vessel is also tracked via GPS.

In terms of maps, the echoMAP CHIRP 54dv (010-01568-01) comes with the BlueChart g2 maps, which cover the coastal waters of the U.S. and Bahamas, including West Coast, East Coast, the U.S. part of the Great Lakes, and the Gulf of Mexico. BlueChart g2 also opens several functions. For example, there’s a Safety Shading option, via which you can designate up to 10 different depth ranges, and assign them to the depth contours, making it much easier to see target depth at a glance. 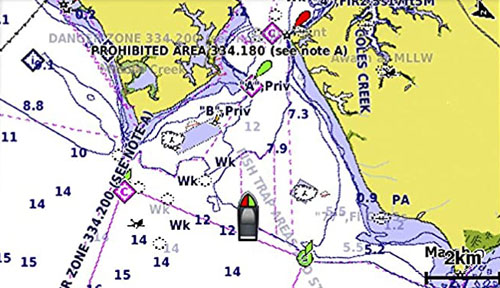 The charts also include currents, tidal stations, IALA symbols, and depth contours, pretty much all information included by NOAA charts. Fishing charts next to the base charts also feature bathymetric contour with less visual clutter. Also, BlueChart g2 offers quite a smooth transitioning between zoom levels, and excellent continuity across chart boundaries.

The unit can save up to 5,000 waypoints, and 100 routes. It also has a trail recording function, allowing you to save 50,000 track points, and up to 50 tracks. Evidently, you can convert tracks into routes, add waypoints to them and retrace them.

One of the brand new functions added to the echoMAP CHIRP fish finders is Quickdraw Contours. This function is pretty similar to the AutoChart Live function offered by Humminbird units, such as HELIX 10 SI GPS, for example. As its name suggests, it gives you the possibility to add depth contours to your maps as you navigate, based on the sonar readings. Thus, no matter what charts you use in your unit, there won’t be any corners of your favorite lake uncharted.

As its name suggests, the echoMAP CHIRP 54dv is a 5-inch display unit. It features a square display, WQVGA, with a 480 x 480 pixel matrix. It’s IPX7 waterproof, which means its cables are secured pretty tight into the unit, the screen is sealed well, and the unit can basically withstand rain, splashes, and even immersion, up to 1 meter.

Speaking of cables, this unit comes with a different type of connection system. All cables plug into the mount, while the unit plugs into the mount via a multiple pin connector. There’s also an NMEA 0183 out on the mount, but the unit comes with an NMEA 2000 adapter cable (4-pin female, to 5-pin male) as well, so you should be able to integrate this unit without much hassle into your boat’s grid if you use NMEA 2000.

The transducer connector features 4-pin. Thus, in case you would like to use a different one, which comes with an 8-pin connector, you will have to use an adapter, which is also included.

Given the connection system, the unit can easily be disconnected from the mount, if necessary. The mount is a simple, tilt-swivel type. However, the box also includes a flush mount.

This unit does not feature wireless connectivity, but data can be transferred via cable, or via microSD card. The microSD card reader features one slot.

There are various image combos available, but as opposed to other models, you can only benefit from two-panel views. In other words, you can choose to view your charts and DownVü, dual-frequency in split-screen, 2D, and Dv in split-screen, etc.

The Garmin echoMAP CHIRP 54dv is an excellent unit for both in-land and off-shore fishing since it offers powerful CHIRP sonar for 2D and Dv, and superior depth capabilities. It’s versatile, easy to integrate in just about any boat grid, an excellent choice for kayaks or bass boats. It features an excellent set of charts, fast and accurate GPS, and the new Quickdraw Contours function, which basically allows you to map any lake or body of water that isn’t covered by the charts you’re using. It’s not exactly a cheap unit, but given the fact that it includes a pretty expensive transducer, and offers a consistent array of features and functions, this unit comes with an excellent price/quality ratio.