To begin with, the transducer supplied with this Raymarine fish finder is the CPT-60 model. It’s a transom 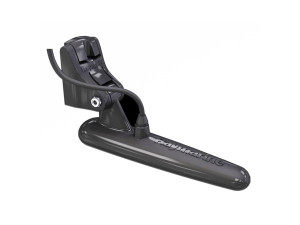 mount transducer, made of urethane material, which also integrates a water temperature sensor. Its cable length is 20 ft (6 m). Needless to say, the transducer supports both sonar channels of the unit. For DownVision, it uses a thin beam, with a 60° side-to-side angle and 1.4° fore and aft. For 2D it uses a conical beam, with an angle of 25°.

Like all the other Dragonfly units, this one offers CHIRP sonar technology for both its 2D and DownVision sonar channels. The supplied transducer evidently supports CHIRP as well. Therefore, the sonar pulse is modulated on a frequency range between 170-230 kHz for 2D CHIRP, and 320-380 kHz for CHIRP DownVision. In case you’re wondering, the CHIRP modulation is superior to the regular, single-frequency sonar, as the images formed on the unit’s display are clearer, with less clutter, and offer a better target separation. So, for example, 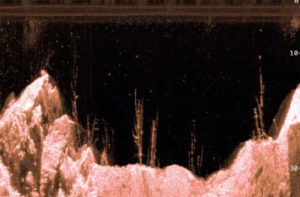 if the sonar beam hits a group of fish, it’s much likely that they will appear on the screen as individual targets, rather than just a big dot of color.

A few other aspects regarding the sonar of this unit should be mentioned here. For starters, the sonar feed scrolls from right to left. The scroll speed can be adjusted. By default, it’s set to 100%, but it can be downgraded to 10%. Pause and zoom are also included functions, but saving a snapshot in the microSD card is not possible.

Functions as A-Scope or Target Depth ID are also available.

The Dragonfly 7 PRO is fish finder / GPS combo unit being equipped with a 72-channel, internal GPS / GLONASS module. It supplies extremely fast and accurate fixes, also being able to track your boat’s speed.

As we’ve mentioned above, this is the E70320-NAG unit and comes with the U.S. Navionics+ charts. These charts cover the North American waters, in other words, US 1XG Hawaii and Alaska, Bahamas, Canadian 2XG coast, all the Great Lakes details, plus 18,000 US Inland Lakes (approx. 2,500 lakes containing 1 ft contour) as well as all Canadian lakes found on the HotMaps Canada product. In terms of charts, this unit can also work with LightHouse vector and raster charts, SonarChart, Navionics Gold and HotMaps, and C-MAP by Jeppesen.

To begin with, the unit features a 7-inch display, with a pixel matrix of 800H x 480V. The display is LED-backlit and optically bonded, with a 15:9 aspect ratio, delivering a sharp contrast, bright colors, and excellent visibility from any angle. The unit is IPX6 and IPX7 waterproof rated, which means that it can withstand incidental water exposure, such as splashes or rain, and even immersions (in freshwater).

The unit requires a 12V battery, the box including a 4.9 ft (1.5 m) of power cable. It comes with a pivot-ball type mount, which promotes an easy rotation and angling. The back of the unit features one microSD card slot, for map upgrades and data transfer.

One of the new features offered by this unit over the old Dragonfly 7, is its Wi-Fi capability. This particular feature allows you to stream the sonar data onto your tablet or smartphone, via the Wi-Fish app (available on iTunes and Google Play). This app allows you to record the sonar stream and also take snapshots, as the unit itself does not have a sonar recording function.

The Raymarine Dragonfly 7 PRO E70320-NAG is a fish finder and chartplotter combo, offering CHIRP 2D sonar and CHIRP DownVision sonar, along with a powerful internal GPS and the US Navionics+ charts. The CPT-60 transducer is included with this unit. Also, it’s Wi-Fi capable, offering the possibility to stream and record the sonar feed on your smart device, via the Wi-Fish app. It’s an excellent system for both freshwater and saltwater. It doesn’t have NMEA connectivity like other similar units such as the Garmin echoMAP CHIRP 74dv for example, but on the other hand, it costs approx. $100 less. All in all, its price/value ratio is fairly decent.