The Deeper PRO+ 2 is one of the fish finders released in 2021. It’s a newer version of the Deeper PRO+ and comes with several improvements. For example, it offers triple-beam sonar, a better target separation, a better battery, and also supports Fish Deeper Premium. For reference, this is the Deeper fish finder part number ‎ITGAM1080.

The Deeper PRO+ 2 features a similar construction to the other Deeper fish finders. It is contained in a spherical 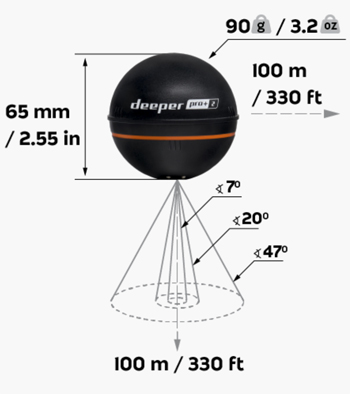 casing made from a durable thermoplastic material. The casing features three attachment points and the box includes two attachment bolts. A neoprene pouch is also included, along with a USB cable for recharging your fish finder.

The top section of the plastic casing is removable. It opens access to the unit’s USB port. Next to the USB connector, there is a LED indicator that should glow green when the battery is fully charged. It also glows blue when the temperature is lower than 37.4°F (3°C) which is too cold for the battery to charge.

The bottom section of the sphere contains the transducer and the battery. As we’ve mentioned above, the battery integrated into the PRO+ 2 is slightly better than the one included with the previous model. It’s Li-Ion 3.7V battery, 950 mAh. It charges pretty fast. It shouldn’t take more than 75 minutes to have it charged at 100%.

The Deeper PRO+ 2 is a castable fish finder that does not come with a head unit like a regular model. It uses your phone as the receiver and connects to it via Wi-Fi. It basically creates a Wi-Fi hotspot to which you connect your phone. The broadcasting range of the Wi-Fi signal is approx. 330 ft. (100 m). 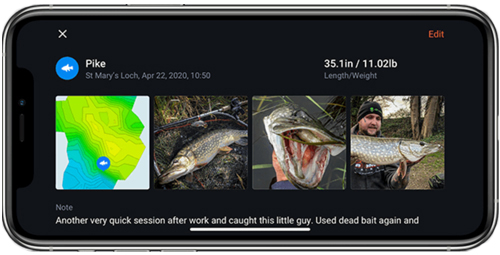 The Fish Deeper app required for the Deeper PRO+ 2 is free and available for both iOS and Android phones. It also has a premium version, but this is not necessary. The premium version opens access to 50,000+ global bathymetric maps. With the PRO+ 2 model, you can claim a 3-month free membership to the premium version of the app.

The Fish Deeper app is quite versatile. It offers a wide array of sonar and navigation features. For example, its top shows a variety of indicators in sonar mode, such as depth, temperature, remaining battery for the sonar, and for your phone, current time, etc. It also has shortcuts to various other applications, such as weather, maps, the phone’s camera, calendar, and more. And finally, it has a split view mode which gives you the possibility to work with both the sonar and the maps or view the sonar in flasher and standard mode simultaneously.

The app offers several sonar views and applications. First of all, there are three color palettes to choose from (day, night, and classic). The standard sonar view has a depth scale that aligns at the right of the screen. The sonar can also be viewed in a Circular Flasher mode, with the depth and temperature in the middle, and the rest of the data on the outer rings. This application is great to have especially for ice fishing.

The app also offers a Fish Symbol mode, an A-Scope feature, and a Fish Alarm. The Fish Symbols feature replaces the arches or targets interpreted by the Deeper algorithm as fish with fish icons. Depending on the fish size, the icons can be small, medium, or large. The A-Scope shows the most recent data caught by the sonar. It aligns on the right from the sonar view. Of course, the Fish Alarm can be set ON so you can get a notification when the unit detects fish. This feature can only work if the Fish Symbols feature is activated.

The Deeper PRO+ 2 has its own internal GPS receiver. This means that you don’t have to hold it close to your phone in order to create maps, or mark waypoints. However, it can still use your phone’s GPS.

The app has a bathymetric mapping feature. This uses the GPS data and the sonar data to reveal and record the depth contours of the lake or river that the Deeper unit is scanning. The app offers a Boat Mode and an Onshore Mode. If the Boat Mode is selected, it will use the GPS on your phone, while in Onshore Mode will use the fish finder’s GPS.

Needless to say, the bathymetric maps can be viewed and worked with in split-screen with the sonar. You can also add waypoints or view the coordinates of a waypoint on a map. The app also has a history feature so you can access unlimited data of the sonar imaging recordings and bathymetric map logs.

Finally, since this is the Deeper PRO+ 2 version, it is compatible with the Fish Deeper Premium app which offers access to a large database of pre-made bathymetric maps. As we’ve mentioned above, the Premium version requires a paid subscription, but you can claim a 3-month free trial for it with the purchase of your PRO+ 2.

The Deeper PRO+ 2 is a castable fish finder that uses your phone as a sonar receiver. It connects to your phone via Wi-Fi and the free Fish Deeper App. It offers triple beam sonar, a max. depth and Wi-Fi range of 330 ft. It also has built-in GPS and the app offers a bathymetric mapping feature. It’s a versatile fish finder for all-season use, great for both shore and boat fishing.